Dawn launch: T minus 1 day: Up close at the Delta II launch pad

Today I stood just inches away from a Delta II rocket at Launch Complex 17 at Cape Canaveral Air Force Station (CCAFS), adjacent to the Kennedy Space Center. It's the thrill of a lifetime to witness history up close and personal at T minus 1 day on a mission designed to unlock the mysteries of the formation of our Solar System. And this is not a toy. It's the real deal loaded with dangerous propellants that can kill in an instant if mishandled. Yet it carries the dreams of scientists, engineers and just plain folks worldwide with the promise of a brighter future ahead. That's why we explore.Dawn will launch from Pad 17 B on a million pounds of thrust. Her eight-year journey culminates at the icy dwarf planet Ceres, for the first detailed investigations of the two most massive worlds in the asteroid belt. Many of NASA's planetary and earth observation satellites are launched on board the highly reliable Delta II rockets. Most recently the Phoenixmission, which will land at the north polar region of Mars and which will touch and sample martian water ice for the first time. My tour of the Delta II launch facility was graciously arranged by Craig Covault, Senior Editor of Aviation Week & Space Technology magazine and by United Launch Alliance which operates the Delta launch vehicle programs, and to whom I am thankful. Following is a photo album of my tour. 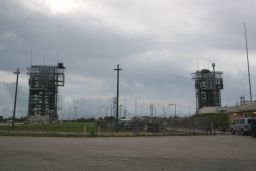 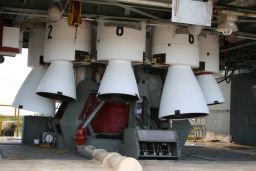 Another busy day at the Cape at T minus 1 day from launch.