When Voyager 2 flew by Iapetus in 1981, it found a line of white dots marching along the equator from Iapetus' bright trailing side into its dark leading side. Images shot with the white dots on Iapetus' limb seemed to suggest that the dots were, in fact, a line of peaks, protruding above the mysterious dark material. These peaks came to be referred to as the "Voyager mountains."

The Voyager 2 flyby of Iapetus

Voyager 2 took a sequence of images of Iapetus as it flew past the Saturn system in August of 1981. In these images, a line of white dots could be seen at the edge of Iapetus' dark region. As Voyager 2 flew up and over Iapetus' north pole, it became evident that the white dots formed a line of mountains on Iapetus' equator.
When Cassini turned to Iapetus, its more sensitive cameras were able to pick out much more detail in the topography within the dark material, and discovered that the Voyager mountains were just the beginning of a long equatorial ridge crossing Iapetus' leading side like the ridge on a walnut. Oddly, the Voyager mountains didn't perfectly line up with the strikingly linear trend of the equatorial ridge. 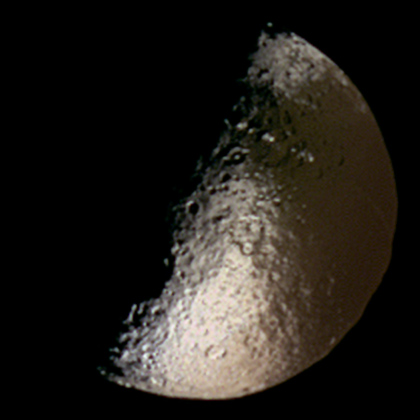 This view was produced from three captured through ultraviolet, green, and infrared filters on October 15, 2004. An intriguing line of white peaks sticks up above the brownish dark terrain. The full resolution image has been enlarged by a factor of two to show detail.
So, during the close flyby of Iapetus on September 10, Cassini targeted the Voyager mountains for high-resolution imaging; these views have a resolution of about 50 meters per pixel, some of the best throughout the encounter. And here's what the Voyager mountains look like up close.

During its September 10, 2007 flyby of Iapetus, Cassini skimmed above Iapetus' equatorial ridge, passing over the "Voyager mountains." High-resolution images taken during the closest approach reveal that the white spots aren't peaks sticking out above the dark material, but are instead the bright flanks of individual mountain peaks.

Inset images at upper right show the context of the observation.

The white spots are on mountains, but they are not the peaks of the mountains, which explains why they don't line up perfectly with the belly band; they're on the flanks of the mountains. Relationships like this, while confusing in the present, will provide useful clues to the Iapetian mysteries of what exactly the dark stuff is, where it comes from, and how it moves around Iapeuts.

If you'd like to play around with the Cassini Iapetus data, I've put a page together that will make it easier for you to find images and match them up:Links to images and metadata for Cassini's Iapetus flyby

Because of the safing event that happened to Cassini when it started returning the data to Earth, the playback got a bit discombobulated. Most of the data wound up being returned, but on the JPL raw images site it's all out of order, with very few of the wide-angle context images being sorted together with the narrow-angle high-resolution shots that were taken at the same time. With a bit of sleuthing and a lot of help from Tilmann Denk's website I figured out which images go where, and also which images were missing. There are a few broken links on the page; these refer to images that Cassini took, but, for whatever reason, were not returned to Earth, or at least have not made it to the raw images website yet.