Kaguya continues to operate nominally. On Saturday, JAXA released two way-cool images taken by the spacecraft to document the successful deployment of two critical components, its high-gain antenna (for communications with Earth) and its solar paddle. 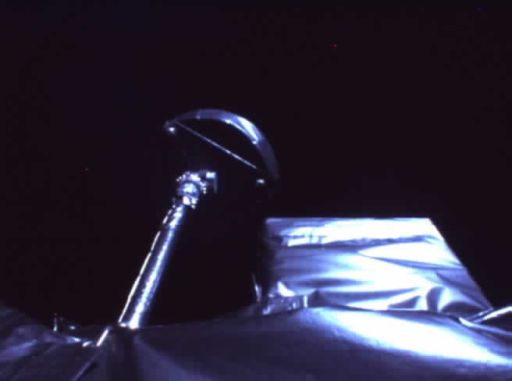 About eight hours after launch, Kaguya deployed its high-gain antenna and solar paddle. A few hours later, the spacecraft took a photo to document the position of the antenna using its onboard camera.
I'm at a loss to explain why I think spacecraft self-portraits are so cool. I guess they're cool because they document the fact that something we humans built really is out there in space or on another planet. That's a fact that we all know, of course; if the spacecraft is returning data at all, it must be out there. But something about seeing a picture of the spacecraft out there is much more emotionally powerful.

Finally, Cherilynn sent me a huge pile of photos to post in her launch blog; go check them out!