I have been overwhelmed by Iapetus and Kaguya, so have given scant attention to the fact that Opportunity has finally, at long last, rolled into Victoria Crater for the first time. I didn't want to pass up this news so I asked Doug Ellison to write an update on how this happened. --ESL

Mars Exploration Rover scientists, engineers and enthusiasts have been playing the waiting game for 10 weeks, watching the much-reported dust storm subside so that Opportunity could get back to doing what it does best - exploring craters.

In the past 20 sols, Opportunity has driven that last few tens of meters to the rim of Victoria Crater. On sol 1291, Tuesday, September 11, with a small piece of the World Trade Center onboard the Rock Abrasion Tool, she took her first toe-dip into Duck Bay. As rover drivers did more than three years ago at the much smaller Endurance crater, the first 'dive' was a brief traction-scouting excursion lasting less than two hours. Opportunity has spent nearly a whole Earth year studying the northwestern rim of Victoria crater trying to find a safe site to enter - and it was the recommendation of rover driver Paolo Bellutta that puts us back, to within a meter, on the very spot where Opportunity first arrived at Victoria, in front of site now appropriately called Paolo's Plunge. 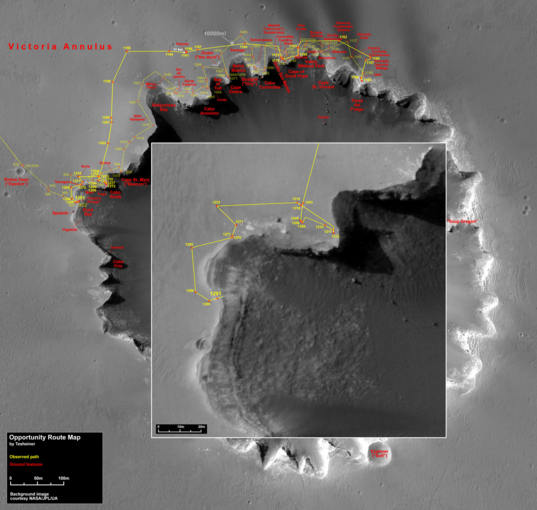 By decoding the filenames of the images returned, we can see that after a lunch of 'brave pills,' Opportunity entered Victoria crater on the strike of 1:00 p.m. local time, and drove approximately four meters over the lip of a small sand ripple at the edge of Duck Bay. By 1:42, Opportunity was fully inside Victoria, and spent about 10 minutes imaging the slope directly in front with a rather dirty Pancam with color filters, a further 10 minutes getting a wider stereo perspective with Navcam, and 40 minutes later began backing out of the crater. An expedition as brief as it was anticipated. 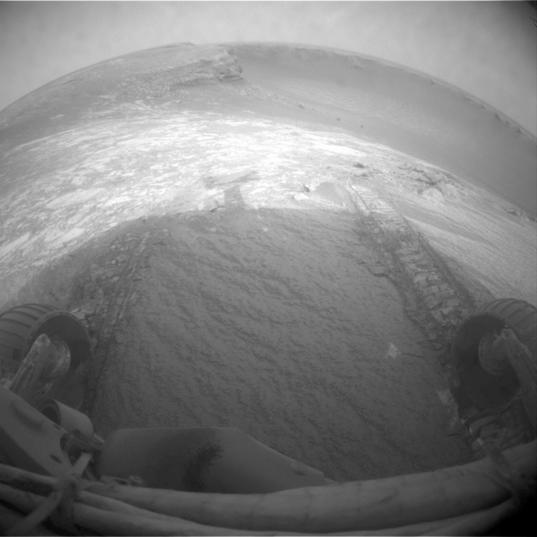 On sol 1291, Opportunity finally rolled into Victoria crater. The rover team commanded Opportunity to drive just far enough into the crater to get all six wheels onto the inner slope, and then to back out again and assess how much the wheels slipped on the slope. This wide-angle view taken by Opportunity's front hazard-identification camera at the end of the day's driving shows the wheel tracks created by the short dip into the crater. In the background on the left are Duck Bay and Cape Verde.

Using the lessons learned at Endurance crater and not least of all at the infamous Purgatory ripple, Opportunity monitored wheel slippage - the amount of distance covered divided by the distance the wheels have turned. Sensing a slip of 40%, the rover stopped just shy of backing all the way out again, with her front wheels just inside the crater, the rears just outside. Engineers will now spend a few days studying the engineering data from the toe-dip before diving back in to Duck Bay. With her second martian birthday less than 50 sols away, Opportunity is ready for a whole new adventure.

View from the 'Toe Dip'

On sol 1291, Opportunity finally, for the first time, rolled onto the sloping surface of the rim of Victoria Crater, taking this view from the bottom of its trepidatious "plunge."

Now back to your regular programming and more spectacular images from the big walnut!

Postscript: The moment I click the "send" button, images of the second excursion into the crater come down the pipe. Just two days later - the toe dip becomes a dive - Opportunity has driven back down into Duck Bay to begin the journey to the layers of outcrop exposed a few meters down the slope. 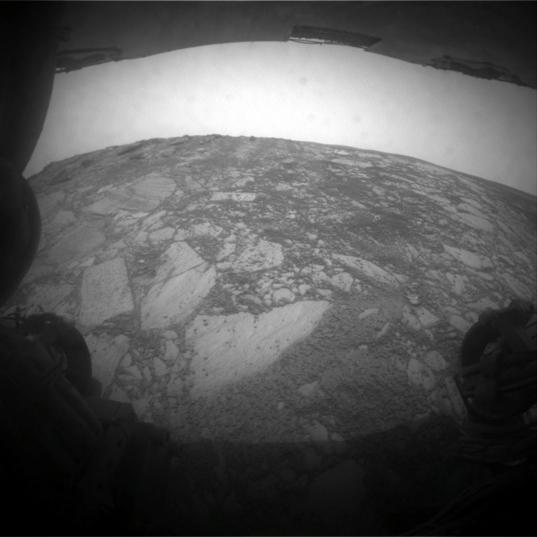 The sloping wall of 'Paolo's Plunge'

On sol 1293, Opportunity contemplated the sloping surface of "Paolo's Plunge," the ramp where it entered Victoria crater.