I am still struggling to digest the massive quantity -- and unmatched strangeness -- of the images from Cassini's encounter with Iapetus. I have heard that some science team members feel just as overwhelmed. What a strange place! How can you possibly explain it? Where did that black stuff come from? It's smeared all over the front and part of the back of the moon, a strange giant splat. Scientists are trying to come up with some ongoing process that can make this world produce such a dichotomous surface, but they are grasping at straws. It's tempting to fall back on a sort of Deus ex machina and just propose that somehow, pretty recently, a giant ball of black stuff splatted onto Iapetus and sprayed all over the place. It's just too ad hoc an explanation to be sensible, but it's temptingly uncomplicated.

Fortunately, images are not the only kind of data that Cassini gathered at Iapetus. Cassini has three other optical remote sensing instruments operating in different parts of the electromagnetic spectrum, plus all its fields and particles instruments, and (unusually for an icy satellite flyby) the RADAR team even tried SAR imaging. There's been no word yet from any of these other teams -- I suspect they're as dumbfounded as everybody -- but as time goes on and the instrument teams start to at least describe what they saw, people will start making connections among features seen in different types of data, and explanations will begin to follow.

Anyway. That's all for the future. For the present, here's another set of images, a 15-frame mosaic of most of Iapetus' trailing hemisphere, which was composed by Gordan Ugarkovic. The data is present to produce this in full, glorious color; I hope to see that image come out of the team some time soon. Zoom in on this to study the behavior of the dark material. I find it varied, fascinating, inexplicable. And under that dark material is a large icy moon, with a surface that is cratered, fractured, and tectonized. If I were to go back to graduate school right now, this is the puzzle I would want to solve. Or at least study! 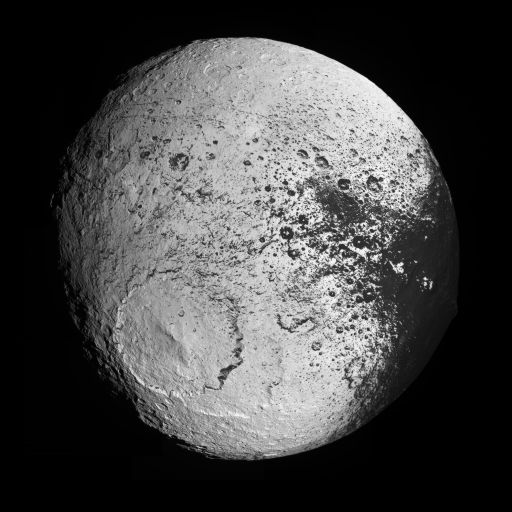 As Cassini departed Iapetus on September 10, 2007, it turned back to capture this 15-frame mosaic on the moon. The image shows Iapetus' trailing side, which is mostly covered with the bright white ice common to outer solar system icy satellites. But the surface is stained with the dark material that covers Iapetus' leading side. The dark material fills some fissures, appears on the flanks of large basins, and even falls in linear chains in the upper left of this image. Also noteworthy are two enormous, unnamed, overlapping impact basins at the lower left.
One thing that makes it so hard to study images of Iapetus is the extreme dynamic range found within them. The human eye is well-adapted to work in a variety of lighting conditions. With the same eyes, we can see our world in the bright midday sun, and we can read by candlelight. The amount of light available varies by orders of magnitude. But we can't view both a sunlit exterior and a candlelit interior simultaneously. Iapetus presents a similar kind of problem. You can optimize your computer display to show brightness-and-darkness variations in Iapetus' bright regions, but if you do that, the dark regions look totally, featurelessly black. Or you can optimize it to show all the detail in the dark regions, but then the bright regions get washed out, all their pixels white. You have to cycle your display back and forth to get all this information. Here's an example of what happens when you play with an image to look at just the light areas (left) or just the dark areas (right):

Some worlds in the Saturn system have bright, icy surfaces, like Enceladus and Tethys. Others have dark-stained surfaces, like Hyperion and Phoebe. Iapetus has both bright icy surfaces and dark-stained surfaces. On a computer, it is difficult to display Iapetus and show all of the brightness variation across its surface. The center image shows one of the "Voyager mountains," as it appeared on the Cassini raw images website. To the left, the levels have been adjusted to reveal subtle shading details in the icy areas, which sets the dark-region pixels to be black. To the right, the levels have been adjusted to reveal the shading in the dark areas, which sets the bright-region pixels to be white. Iapetus needs to be looked at in both these ways for its surface features to be revealed.
I'll caution that this image was taken from the raw images website, which serves up images that are only 8-bit (that is, the pixels can only take on one of 256 different gray levels). The actual data for most of these pictures is 12-bit (that is, the pixels can take on one of 256x2x2x2x2 = 4096 different gray levels). The actual data contains a lot more subtlety than this image can show; once the data hits the Planetary Data System, in 9 months or so, I'll have to go back in and see how much more is visible.

More Iapetus to come! It's just an awfully big meal to digest.