Kaguya launches in less than 8 hours!

...at least if the weather holds, it will!

I'm looking for suggestions on where to find information about the launch of Kaguya. Here's what I've come up with so far. Here's one website that lists several online locations. JAXA's streaming broadvast will be bilingual, but the other media on that page will be in Japanese only.

Here is a frequently updated blog hosted by Mitsubishi Heavy Industries Ltd. According to that wesbite, a "Go/No-Go" decision was held at 01:40 JST (09:40 PDT / 16:40 UTC), and all systems were "Go," with the weather looking good; they are now proceeding with the operations to prepare loading the launch vehicle with liquid hydrogen and oxygen.

I don't see any new images on JAXA's photo archives for the launch; I guess it's in the middle of the night there! Hopefully they will catch some once the Sun rises.

Finally, as I get updates, I'll post anything Cherilynn Morrow manages to send from the launch site to her blog.

UPDATE: Here's a snap from the Tanegashima webcam. 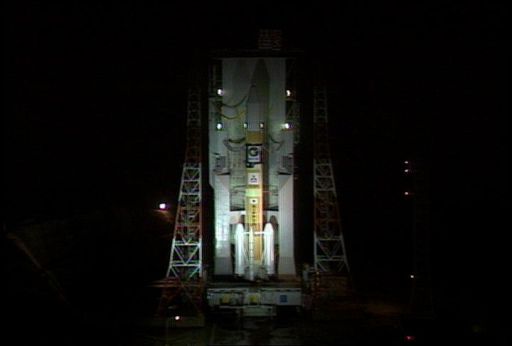 Kaguya on the launch pad