Eight more images came down from the spacecraft this afternoon as part of a brief downlink opportunity not long after Cassini's closest approach to Iapetus. A lot more data than these eight images was planned to have been returned, but most of that was the RADAR team's synthetic aperture radar (SAR) swath on Iapetus. Radar isn't like camera data; it's no easy task to convert radar data into SAR images. So I have no idea if that swath was successful or when we'll see the first pictures from it; but I'm dying to see them!

Among the eight images were three captured through clear filters, taken while the UVIS spectrometer was performing observations of an area in Iapetus' northern hemisphere that marks the fuzzy boundary between the bright and dark terrains. Without any color information, it's not easy to be sure where the boundary is. I think it's a bit to the north (right) of this view; anyway you can see that several of the craters have one little segment of bright wall, the segment that faces to the right, and I think these are areas in the light-dark transition zone where pole-facing crater walls within the dark region are bright.

What's overwhelming about this mosaic, which was assembled by Ian Regan, is that there are craters, craters everywhere. 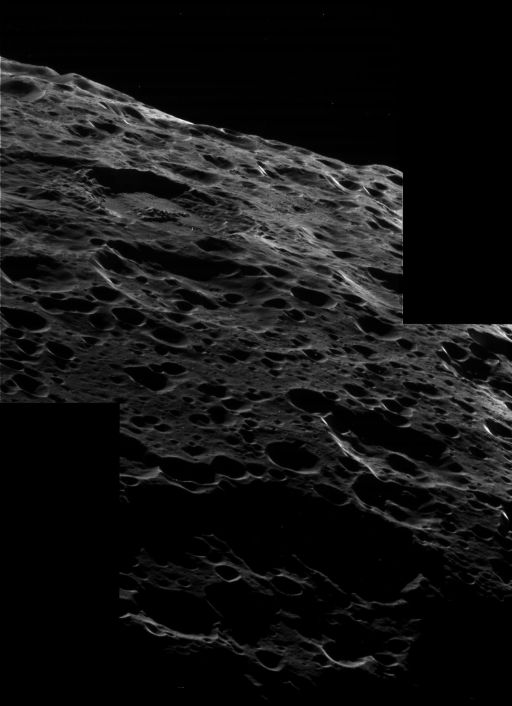 Iapetus' crescent at 80 meters per pixel

This three-image mosaic covers the northern edge of Cassini Regio, the darkened leading side of Iapetus. There are craters everywhere; Iapetus' is a truly ancient surface.
Impact craters -- each one of them created by the violent collision of a much smaller body with Iapetus, some time in the past -- are important to planetary geologists for a number of reasons. Across the solar system, impact craters provide a sort of clock to perform age-dating of solid surfaces. Every solid surface in the solar system has been pounded and pounded by impactors over geologic time. If a body has no other geologic activity than impact cratering, it will look pretty battered, like Mercury or the lunar highlands or Mimas. If there's something else going on on the planet that can modify the surface, the geologic record of impact craters will be modified or even obliterated, as happens on Earth, Io, and Titan. Many places in the solar system are interestingly intermediate in age, like the lunar maria and parts of Mars, indicating either that geologic activity halted some time in the past, or that it is so slow as to be unable to compete with the continued modification by impact cratering.

A first glance at Iapetus says that this surface is really, really, really old. Everywhere you look, there are craters. Every crater seems to have hit another crater below it. And most of the craters you can see (with a few very interesting-looking exceptions) are nice and bowl-shaped, indicating that nothing has modified their shapes much since they formed. This is in marked contrast to craters elsewhere in the Saturn system; on the other largish icy moons, like Dione and Rhea, the ice beneath craters has flowed, smoothing out the crater floors. Not here! There's not much flowing underneath these craters.

I can't wait to see what tomorrow will bring!