I just received another batch of "tau" images from rover camera lead Jim Bell to add to my visualizations of the rovers' dark skies. If you're a newcomer to the blog I invite you to read a more thorough explanation of the tau images here; the short version is that each circle on these images and animations represents one picture of the Sun, which the rovers capture each day through very dark solar filters. These pictures provide a direct measurement of the opacity of the atmosphere between the rovers and the Sun. Spirit is looking very good, and is feeling energetic enough to have climbed on top of Home Plate at long last: 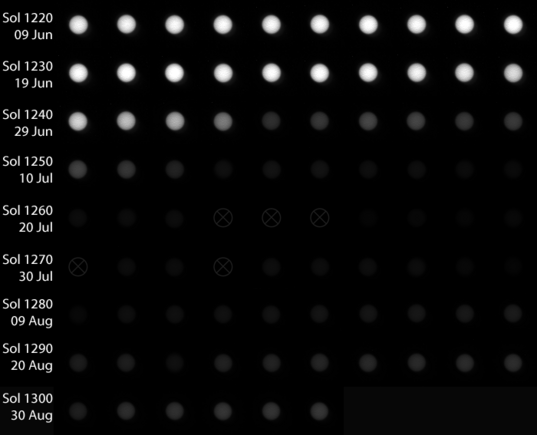 Several times a sol, the Mars Exploration Rovers take images of the Sun (using a very dark solar filter) to determine the opacity of the atmosphere (a property that is referred to as "tau"). Here, images of the sun taken since sol 1220 of Spirit's mission have been calibrated to show how dim the Sun appeared through the dust storm. Wherever a circle with an "X" appears, for example, for sols 1263-1265 (July 23-25, 2007), the skies were so dark that Spirit could not muster enough power to perform its usual tau measurements. 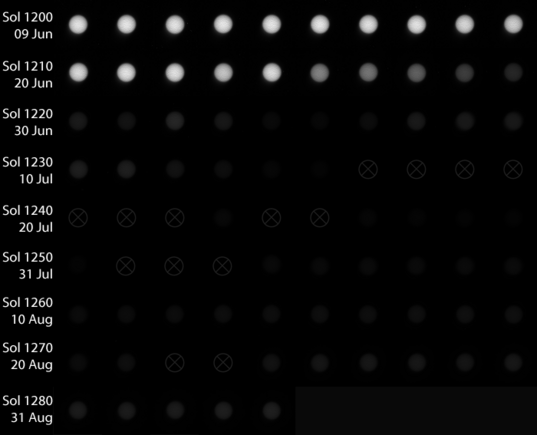 Here are the same two sets of images as animations.

A release issued by JPL today acknowledges the fact that the dust storm may have caused some permanent damage to one or two of Opportunity's instruments.

The rover team plans to assess if dust has impaired use of the microscopic imager. If that tool is working, the team will use it to observe whether a scanning mirror for the miniature thermal emission spectrometer (Mini-TES) can function accurately. This mirror is high on the rover's camera mast. It reflects infrared light from the landscape to the spectrometer at the base of the mast, and it also can be positioned to close the hole in the mast as protection from dust. The last time the spectrometer was used, some aspects of the data suggested the instrument may have been viewing the inside of the mast instead of the Martian landscape.

"If the dust cover or mirror is no longer moving properly, we may have lost the ability to use that instrument on Opportunity," said Steve Squyres of Cornell University, Ithaca, N.Y., principal investigator for the rovers' science instruments. "It would be the first permanent loss of an instrument on either rover. But we'll see."There is good news from the release, however: they say Opportunity should finally do its first "toe dip" into Victoria next week.