Another approaching view of Iapetus

This morning I found four more Iapetus frames on the Cassini raw images website, captured from a third closer to Iapetus than yesterday's post. Here's that picture, which I produced the same way I described yesterday. You can see a little bit more detail on that northern impact basin, and suddenly the "belly band" of Iapetus' equatorial mountains is popping in to view on the western limb. 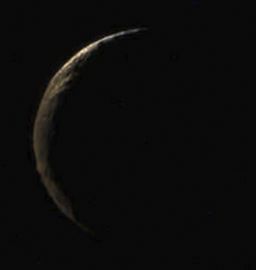 Cassini captured the images for this view of Iapetus as it approached for its closest flyby of the moon on September 5, 2007 from a distance of about a million kilometers. The image is a color composite of images taken through infrared, green, and ultraviolet filters, superimposed on another image composed of four separate exposures stacked together (to remove artifacts). The full-size image has been enlarged by a factor of three, giving a resolution of 2 kilometers per pixel, and has been rotated so that north is up.
Tilmann Denk has told me that there will be three more of these approach shots before the Iapetus science plan kicks in on Saturday. The first two had resolution and phase of 8.7 kilometers/pixel and 152 degrees and 6.2 kilometers per pixel and 149 degrees. The next three will be 5.4/148; 4.2/147; and 3.0/147. I'll keep checking the website for these! They'll make a nice animation.