I don't believe I'm going to get my Iapetus preview story in the shape I want it to be in time to post it today, but I thought you might enjoy seeing this image as a bit of a teaser. Cassini took the images for this photo from a distance of about 1.5 million kilometers, and it shows you how Iapetus is a barely-lit crescent. Cassini's forward view will continue to show Iapetus as a crescent throughout the approach phase of the September 10 flyby; it's only as the spacecraft passes the closest approach that it will swing to the daylit side of the moon. 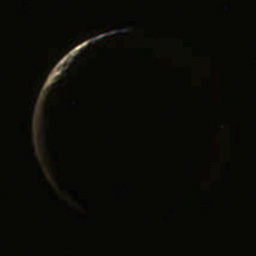 Cassini captured the images for this view of Iapetus as it approached for its closest flyby of the moon on September 3, 2007 at about 07:00 UTC from a distance of about 1,500,000 kilometers. The full-size image has been enlarged by a factor of three and rotated so that north is up.
To make this image, I took five of Cassini's photos and stacked them, a trick that is familiar to anyone who does astrophotography; by stacking images you can average out imperfections (caused on Earth by the atmosphere and on Cassini images by the JPEG compression they're run through before they're posted on the raw images website), leaving behind sharper detail on the target of interest. Then I took three of the images taken through infrared, green, and ultraviolet filters and composed an RGB color composite. Then I converted that to Lab color, and swapped my stacked, sharp image into the Lightness channel. Finally I rotated it so that north is up. The sunlit part shows some of Iapetus' dark terrain, in the middle of the leading hemisphere, reaching up to the north pole, which is bright. There is a conspicuous impact basin on the limb.

Iapetus is one of the few targets in the Saturn system that actually has interesting color variations across its surface, so it is a lot of fun to create color images. If you want to give it a try as Cassini starts returning Iapetus images taken from closer and closer, check out my color imaging tutorials.