The cave entrance on Arsia Mons really is a pit

The HiRISE camera on Mars Reconnaissance Orbiter has gotten another look at that dark hole on the flank of Arsia Mons. This time, the viewing geometry was different. In the original image, taken in May, HiRISE was looking "nadir," that is, straight down. Absolutely nothing was visible in the blackness of the pit. 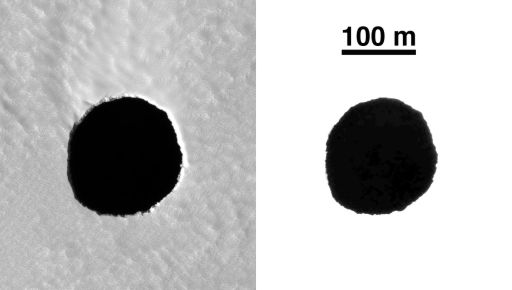 At its highest resolution of 25 centimeters per pixel, the HiRISE camera can see the detailed shape of the slightly scalloped edge of a hole on the flank of Mars' Arsia Mons (left), but no amount of image enhancement (right) can bring out any further details inside the hole. That means that the walls of the cave are overhanging -- the cave is larger below the ground than the entrance we can see at the surface -- and that it is very deep. Mars' dusty atmosphere produces enough scattered light that "skylight" would illuminate the floor of a shallow cavern well enough for HiRISE to detect it.
In the new image, taken a few weeks ago, Mars Reconnaissance Orbiter was not flying directly over the cave; it was flying some distance to the west and so looked at the cave from an angle. The Sun was also shining on the surface from the west, so as HiRISE gazed east, it could see the Sunlit eastern wall of the pit, sinking nearly vertically into the ground. Cool! I took the image from the HiRISE website and fiddled with the levels a bit to make the duney surface of Mars a bit more visible, and also to bring out some detail on the shadowed part of the interior wall of the crater. 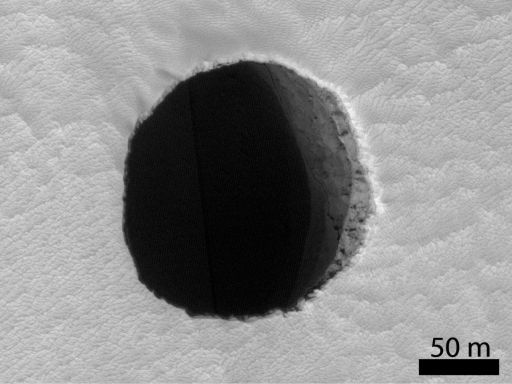 In this HiRISE image captured on August 8, 2007, a black spot mars the flank of Arsia Mons. The spot is most likely a skylight onto a subterranean cavern. The cave was previously seen by HiRISE (on May 7, 2007) from nearly overhead, and the interior of the hole revealed nothing. In this image, HiRISE was looking at the cave entrance from the west, so can see the eastern wall of the pit before it vanishes into blackness. Near-vertical striping on the image is an artifact of image processing. The brightness and contrast of this image has been adjusted to bring out more details on both the dune-covered surface and the eastern wall of the pit.
After I posted the original image back in May, I received several emails from readers telling me they had taken the original image as posted in the blog and done their own fiddling with brightness and contrast, and, lo and behold, they found that the interior of the pit was not completely black. Did the HiRISE team not work hard enough to try to find details inside the pit? Unfortunately, these readers made an error. Most of the images I post here -- and most of the images posted all over the Internet -- have been compressed in order to save people download time. The vast majority of these images are compressed using an algorithm called JPEG, and I encourage you to do a Google search and read about what JPEG compression does to images. The important fact for this discussion is that pixel values in JPEG-compressed images are not quite the same as they were in the original image. You don't usually notice the blemishes that JPEG compression introduces into images, but they become very obvious if you do something like stretch the brightness or contrast to try to find subtle details hidden in highlights or shadows.

To explain what I'm talking about, consider this image below. This image is 40 pixels on a side and consists of a circle made of only 100% white pixels drawn on a 100% black background.

Now let's take that circle and save it with JPEG compression, and here's what you get.

All of those pixels started out life as completely black or completely white, but the JPEG compression scheme altered their values slightly. It wasn't too obvious in the image though until I started monkeying with the brightness and contrast. However, it becomes much more obvious if you begin with an image that has already been saved with JPEG compression, monkey with it, and then save it again with JPEG compression. It's kind of like making a photocopy of a photocopy; over time, the errors start to build up, and you move farther and farther away from what the original image looked like. The image below has been re-compressed five times, simulating five times that it might have been opened, worked on, saved, and closed in an image processing program.

And here's what that picture looks like if you monkey with the brightness and contrast. I adjusted these images by exactly the same amount as I adjusted the once-compressed image above, so you can see how much more the image has changed after being re-re-re-re-compressed. These features in the image, introduced through processing, are one type of "artifact" that can make it difficult to interpret space images.

The lesson is, it's dangerous to attempt to draw conclusions based on what you might see in an image when you try to reveal details hidden in highlights or shadows. It is safer to begin with the original data from the Planetary Data System. However, even these images are not completely safe; spacecraft operators often compress images on board the spacecraft before returning them to Earth to save on bandwidth, so the original data may contain similar artifacts to the ones shown here. The effect is particularly pronounced when spacecraft need to take lots of images and send them back to Earth really fast. Some of the worst artifacts I've seen in original image data were on the Huygens spacecraft, which had to funnel all of its data through a tiny transmitter and do it in real-time; there was no way to return lots of images without compressing the heck out of them.

You can avoid introducing compression artifacts into your own images by saving them on your computer in formats other than JPEG. JPEG is a "lossy" compression scheme that shrinks file sizes at the expense of introducing artifacts such as these. Consider working with your images in PNG format, which compresses images somewhat (not as effectively as JPEG) but does not introduce artifacts.

And please, avoid trying to draw scientific conclusions from images that you have taken from the Internet and stretched hugely to reveal details hidden in highlights and shadows. For the most part, those details are probably not real!