I haven't written an update on the dust storm at Mars recently for two reasons. For one, the rovers are out of immediate danger, so it wasn't as urgent. The other reason is that Jim Bell, Pancam man and Planetary Society board member, wanted Cornell to issue a press release with updated versions of the images and animations I've been putting together from the rovers' "tau" images (explanation below). That took a little while to get together -- but now that Cornell has issued their press release, I can present almost 80 sols' worth of rover images of the Sun, which powerfully represent how bleak the solar power situation has been for both rovers. 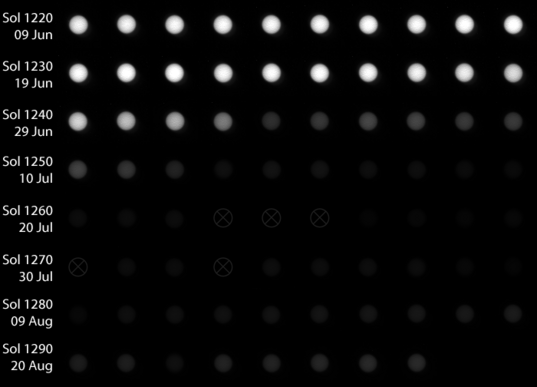 Here, images of the sun taken since sol 1220 of Spirit's mission have been calibrated to show how dim the Sun appeared through the dust storm. Wherever a circle with an "X" appears, for example, for sols 1263-1265 (July 23-25, 2007), the skies were so dark that Spirit could not muster enough power to perform its usual tau measurements.

A quick explanation of these pictures: every sol (usually several times a sol), the rovers place dark solar filters over their Pancams and then find and photograph the Sun. When they are calibrated, these images provide a direct measure on how much of the Sun's light the atmosphere absorbs or scatters before it can reach the rovers. The opacity of the atmosphere is usually described through a number referred to by the Greek symbol tau (τ); atmospheric opacity increases exponentially with increasing tau. (More on that, including the equation for tau, in this news story I wrote about a month after the storm started.)

Making these montages is something that can only be done with calibrated data. The images that are posted on the raw images website are not calibrated; they all have an auto-stretching algorithm applied to them to make the pictures look even and properly exposed, which is good for most public outreach purposes but destroys the kind of absolute brightness information that you need to produce pictures like this that accurately represent the brightness of the scene. Properly calibrated data is available for the rovers and other space missions once the data has been released to NASA's Planetary Data System, but those releases aren't immediate; they usually take some time between three months and a year, depending on the mission. So I owe thanks to Jim for his generosity with "his" data for the fact that I (and all of you who are reading this) can follow the brightness of the Sun to the rovers in near-real-time. Thanks, Jim, for the opportunity to work with data fresh from Mars! Any space image data is thrilling -- but knowing that these images are only hours or days old makes it extra-exciting. The montages of images I have here actually include 6 or 7 more sols' worth of data than Cornell has in their release.

The release that Cornell issued included some up-to-date facts about the rovers' current power situation:

For the rover Spirit, the Jet Propulsion Laboratory (JPL) in Pasadena, Calif., reports that even though the Martian sky above Gusev Crater is clearing, solar power levels remained fairly low and constant dust now appears to be accumulating on the solar panels. Between sol -- a Martian day -- 1283 (Aug. 12) and sol 1286 (Aug. 16), the atmosphere cleared by about 35 percent, leading to daily energy levels of about 300 watt-hours (the amount of energy needed to light a 100-watt bulb for three hours). Typical levels before the dust storms were around 700 to 900 watt-hours for the rovers.

On the other side of Mars, Opportunity, now waiting to enter Victoria Crater from the rim, is currently experiencing its lowest power levels to date. The sky was so dark in mid-July that less than 200 watt-hours of daily energy was available, according to JPL. But skies are slowly clearing, offering hope that the rover will be ready for a descent into the crater soon. Opportunity benefited from wind blowing some dust off solar panels on Aug. 22. Under gradually clearing skies, Opportunity's solar panels were producing about 300 watt hours daily by Aug. 24.

A. J. S. Rayl has also, just today, posted a story on the improving power situation.