One of the things that's been clogging my email inbox (which is down to 250 items, so I've been making some progress) are a pile of articles about Titan from a special issue of the journal Planetary and Space Science that I requested from various scientists about three months ago. ESA issued a press release about these when they were published in June, and still I didn't get to them. With our website down yesterday, I was able to sit down and start doing some reading. Many of these represent the end product (or at least an end product) of work that I've written about before, when the researchers presented progress reports on their work at various conferences.

Larry Soderblom's name was first on two articles. One was on the topography and geomorphology at the Huygens landing site, which they are deriving by doing stereo analysis of images taken by Huygens' DISR imaging system. Reading this article, I was reminded of the extremes of luck that smiled upon -- and plagued -- Huygens. In the former category, Huygens was extremely fortunate in that as it drifted down to its landing site, it just happened to emerge from the haze right over a major boundary between Titan's bright and dark terrain, affording incredibly lucky views of drainage channels dissecting the bright highlands, emptying into a dry, dark basin. In the latter category, the loss of one of Huygens' two data channels, and the nearly vertical descent (rather than the horizontal drift predicted by Huygens' designers), resulted in there being very few pairs of images useful for stereo analysis. The paper presented some digital terrain models that were improved slightly from ones presented at past conferences, and also made the interesting point that the flat region in which Huygens landed has experienced runoff from those drainage channels but has also experienced what appears to be "major west-to-east floods across the plains with flow parallel to the highland-lowland boundary," an event that occurred in a wetter period in Titan's recent past. 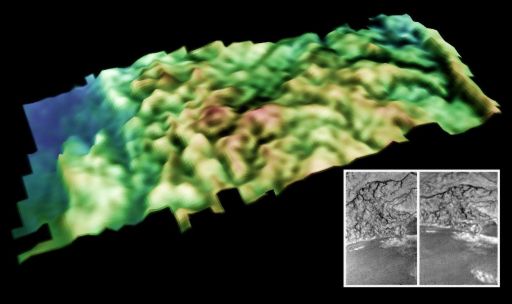 This perspective view of an area on Titan was generated from two DISR images (inset). The left image was acquired from 14.8 kilometers (9 miles) above the surface with the high resolution imager; the right from 6.7 kilometers (4 miles) altitude with the medium resolution imager. The two images differed in their "look angle" by about 15 degrees, allowing scientists at the USGS to generate a topographic model of the terrain. The total relief in the view is about 150 meters, and the area covered in the view is about 1 by 3 kilometers (0.6 by 2 miles).
A related paper, on which Larry is also first author, discusses some possible explanations for why -- other than one set of dark dunes that can be matched -- "there is remarkably little correlation between features seen in the [Cassini RADAR] SAR images and in DISR." Larry's favored model goes like this. Optically, we see bright regions and dark regions on Titan. In infrared wavelengths, you can see evidence that the dark stuff has more water ice than the bright stuff. (Read that sentence carefully. Most people assume that the bright stuff is water ice, but it's the dark areas on Titan that are more ice-rich.) But if you look at Titan with a spectrometer like Cassini's VIMS, you find that the dark regions come in two varieties; one is richer in water ice than the other. The water-ice-richer dark stuff is referred to as "blue" by the VIMS team because that's what color it appears when you make an RGB image from VIMS data using the 2.0, 1.6, and 1.3-micron channels as red, green, and blue respectively. The water-ice-poorer stuff appears brown, not blue, in the same color composite.

This image blinks between a VIMS false color and RADAR image of a small crater on Titan. A few facts are easy to observe: 1) The dark area marking the center of the crater as seen in VIMS is smaller than the apparent crater visible in the RADAR image; 2) There is a center bright spot to the crater that is visible to VIMS, but apparently invisible to RADAR; and 3) The bright area marking the crater ejecta as seen in most VIMS wavelengths is smaller than the bright area around the crater. However, the VIMS 1.3-micron image, which contains the blue halo, demarcates the same area as a larger, RADAR-bright halo around the crater. This blue material is an example of the relatively-water-rich dark stuff seen by VIMS.

Cassini RADAR and VIMS view of a possible cryovolcano on Titan

This animation compares two views of a small crater-like feature on Titan, captured with Cassini's RADAR and VIMS instruments. The RADAR view shows a bright circular feature about 10 kilometers in diameter with a fan of material spraying to the northeast. The color VIMS view overlaid on top shows that the fan has sharply different color to the background. Furthermore, the boundaries of the fan are very sharp. These two characteristics suggest that the fan is a deposit of solid material that originated from the small circular feature, which may be a cryovolcano. The dark plains are "brown" to VIMS, and hence relatively poor in water ice.
Larry and his coauthors show that the brown areas (relatively poor in water ice) "correlate strongly, if not uniquely, with the vast dunes seen in Cassini RADAR images." So, they say, the dunes are probably made of hydrocarbon and nitrile stuff with less water ice mixed in than the non-duney dark plains (the blue areas). The bright regions are probably dark underneath, but are mantled by "bright aerosol dust." This mantle looks bright to VIMS (and DISR) but might be transparent at much longer radar wavelengths, which is why the correlation between VIMS and RADAR images is often not very good. In the drainage channels the bright mantle has been eroded away, leaving behind dark channel floors. If true, this too was a fortunate circumstance for Huygens. The dark floors of the channels are what make them leap into view from the DISR images; on hazy Titan, there is virtually no topographic shading to tell us what's up and what's down. 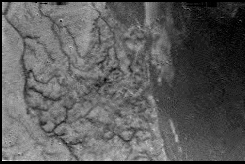 The second image released to the public from the Huygens descent to Titan showed a network of drainage channels on the surface.