Two sky events Aug 27/28: One reason NOT to look up, and one reason to get up early

So it's August 26, time to -- for the last time this year, anyway -- state that the email that's circulating about Mars being as big as the full Moon is as bogus as it was when it first appeared in 2003. I just found on the Internet a really nice amateur photo of Mars and the Moon together in the sky during that 2003 opposition (to be more precise, six weeks prior to opposition), when Mars was almost as big and bright as it was ever going to get. If one of your friends or family members sends out this email, please do everyone a favor and "reply all" with a link to Bruce Betts' story explaining why Mars will not appear as big as the full Moon on August 27. 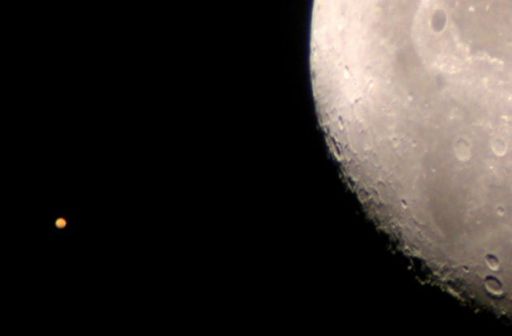 Amateur astronomer Becky Ramotowski took this image of Mars and the Moon in an unusually close encounter in the night sky on July 17, 2003 from an observing site in San Antonio, Texas. Mars was just six weeks away from opposition at the time, so the image represents Mars nearly as large as it ever appears in the night sky.
It just happens, however, that there's a good reason to look up in the sky the same night -- or very early the next morning, anyway, if you live in the right part of the world; there is a total lunar eclipse on August 28, which will take place in the wee hours of the morning, West Coast time. For more information on that, check out Fred Espenak's always-excellent pages on the eclipse, or the useful information at skyandtelescope.com.