After John Spencer's excellent talk the conference attendees adjourned to a poster session and reception (PDF format). Poster sessions are a lot like Science Fairs; a researcher prepares a large poster summarizing his or her work, then stands in front of it as people walk by and examine it. Typically, people are too lazy or too weary to read all the text on the posters, so they walk up to the presenters and ask to have the work explained.

The first poster I aimed for caught my eye because this was sitting on the floor below it. 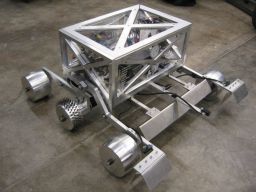 The Vehicle for Icy Terrain Locomotion

Who doesn't love a rover? This one resulted from a University of Colorado senior project whose objective was to design and build an engineering model for a mobility system capable of traversing icy terrains, like those of Eruopa, traveling one kilometer in seven days. As a student project, it's not a serious entry as a proposed vehicle for future Europa exploration; but clearly the students had a lot of fun exploring some of the design challenges they'd face in building such a vehicle. My favorite aspect of it was the wheels. Only the rover's center wheels are motorized. But they're well equipped to propel the rover, having 240 lovingly machined tempered steel spikes. Here's a closeup: 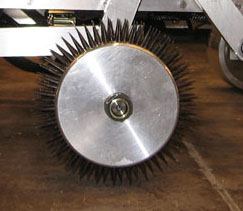 The center wheels on VITL are each studded with 120 individually machined tempered steel spikes.
On the poster, these were advertised with the following text: "Tempered steel spikes for super traction!!" The double exclamation point made me mentally add: "As seen on TV!"

The presenter, recent graduate Chris Homolac, told me that to test the mobility system, they needed an Earth analog with the hardness of ice on Europa, with slopes equivalent to 20-degree slopes found there -- but, if you correct for the different gravity between Earth and Europa, a 2.5-degree slope suffices. And ice on Europa is so cold as to be as hard as concrete is on Earth. Where did they find concrete and 2.5-degree slopes? In the University of Colorado parking garage, of course. The rover has a top speed of 0.6 centimeters per second (71 feet per hour), and successfully negotiated those slopes. Homolac also divulged that the spikes have drawn blood from every member of the team. Here's the project website if you want to see more. 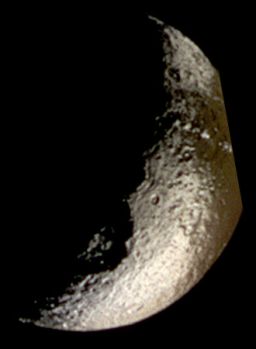 This view was produced from three captured through ultraviolet, green, and infrared filters on October 17, 2004. An intriguing line of white peaks sticks up above the brownish dark terrain. The full resolution image has been enlarged by a factor of two to show detail. The crescent is cut off on the right because Iapetus was nearly out of the field of view when Cassini took the picture.
Tearing myself away from the rover, I moved on to the adjacent poster, in which Tilmann Denk was showing off the plans for Cassini's September 10, 2007 encounter with Iapetus, the only close flyby throughout the mission. Tilmann talked me through each and every observation planned for the encounter, and also through some of the very tricky observation scheduling they performed to optimize the science return. At any given time, only one of Cassini's instruments "controls" the pointing for the spacecraft, though all the optical remote sensing instruments have the same boresight so they can all, in theory, capture data at the same time. As it turns out, the main camera system on Cassini, called ISS, is controlling pointing for only one minute of the two hours around closest approach! But they are taking lots of quality, carefully aimed data as the other instruments, CIRS, UVIS, and VIMS, control the pointing of the spacecraft. Unfortunately, there was way too much detail in what Tilmann talked through for me to be able to take much of any coherent information away from the poster; he has promised to share with me some tables of information once he can get his email access working. Here are a few interesting tidbits, however:After that I attempted to move on to some other posters, but my daughter decided it was time for dinner, so I had to leave! I happen to know that Phil Plait, the Bad Astronomer, who has recently become a Boulder local, also dropped in on the poster session (because I told him to crash it), so perhaps he'll have more to say about some of the other presentations....