I felt a bit overwhelmed after the morning's theory-laden sessions, so it was a relief to meet Anahita and her grandma (along for the trip -- who wouldn't want to visit Boulder in August?) and go have some lunch in the patio of a sandwich shop on Pearl Street. Nick Schneider, who is a professor at the University of Colorado and an author of one of the better introductory astronomy and planetary science textbooks out there, joined us. That link goes to Amazon, but I wouldn't advise buying it now; one of the things we conversed about over lunch was the fact that he was currently going over the proofs for the next (fourth) edition. But mostly we didn't talk business, we talked about kids and working lives and stuff. It's an unfortunate coincidence of timing that most academics produce children around the same time that they are either writing dissertations or attempting to win tenure, and having both young children and young academic careers at the same time is a pretty heavy burden. It's a burden that weighs especially heavily on women academics, especially in non-medical sciences, because women academics are more likely to be married to male academics in the same position than male academics are to be married to women academics. This is one of many, many reasons I chose not to stay in academia after finishing a Master's degree. 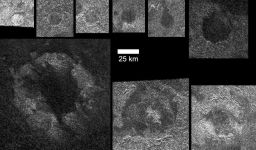 The T13 RADAR swath crossing central Xanadu contains many "quasi-circular" features. Some of these may be impact craters; or some of them could be volcanic structures; or they could simply be accidental patterns formed by other geologic processes.
Anyway, after that nice break I returned to the meeting to a session delightfully titled "Heavens on Earth: Terrestrial Analogs." The first presenter was Rosaly Lopes, who has blogged in this spot before: "Much Like Earth: Distribution and Interplay of Geologic Processes on Titan from Cassini RADAR Data." Rosaly's presentation was not dramatically different from ones I have seen her make before, although it of course included the latest and greatest data from the RADAR team and showed that they are beginning to get reasonably global RADAR coverage across Titan that is allowing them to begin to get a sense of what fractions of the moon are covered by different types of terrain. At one point she discussed the fact that they still have not identified more than three certain impact craters on Titan. They can, however, map a lot of what they call "SCFs" -- which stands for Suspiciously Circular Features. She didn't discuss the size distribution of the SCFs but did say that their global distribution appears fairly uniform, which is what you would expect if they were impact craters. (If they are impact craters, there should be exponentially more small ones than big ones, with the numbers of small ones dropping off at some point where the atmosphere starts preventing them from hitting the ground.) Another interesting bit of news is that Jani Radebaugh has a paper in press in the journal Icarus in which she states that some of the mountains on Titan are more than a kilometer in height. This is small potatoes compared to the 13-kilometer massifs on Io, but it's really hard to keep ice from flowing from such a height on geologic time scales, so that's an interesting observation; I've asked for a copy of the paper. I should also mention that the RADAR team has lately released two more full swaths of data from Titan, which I will hopefully post once I get done with reporting from this meeting! 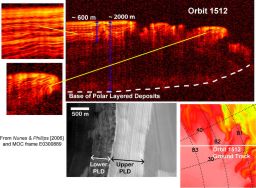 The upper right panel contains a radargram from the Shallow Subsurface Radar (SHARAD) on Mars Reconniassance Orbiter. SHARAD has detected detailed structure in Mars' north polar layered deposits (PLD). The radargram represents the strength with which SHARAD's broadcast radio waves were reflected back at the orbiter; the vertical scale on the radargram is the time delay between the broadcast and the received echo.
Then there was a really interesting presentation by Donald Blankenship on "Terrestrial Analogs for Radar Sounding of Europa's Icy Shell: The View from Antarctica." He showed examples of results from Mars Express MARSIS and Mars Reconnaissance Orbiter SHARAD for mapping Mars with radar sounding to demonstrate that it does work away from Earth; then he moved on to show what's being done with radar sounding at Antarctica. They are using an instrument that, if I understood him correctly, was actually built as a testbed for technology being developed for one of the earlier incarnations of a Europa mission. He showed beautiful radargrams from a variety of different types of subglacial lakes in Antarctica: lake Vostok, which is covered by fairly smooth ice, as well as lakes covered by very rapidly moving ice streams. A major point that he wanted to impress upon the scientists gathered at the meeting was that the quality of the radargrams depends directly on the amount of bandwidth allotted to the instrument. For Mars, it's easy to send a lot of data back; it's much harder to do this from an outer planet.

Next, Damhnait Gleeson presented her work on "Biochemical and Spectral Characterization of a Sulfur-rich Glacial Ecosystem and Potential Analog to Europa." This is a progress report on the work that The Planetary Society supported her in doing at Borup Fiord Pass last summer, and I encourage you all to, if you haven't already, read the blogs from that trip, and look at their amazing pictures.

Then Charles Hays presented on some cool lab equipment for studying "Cryogenic Property Measurements on Icy Compositions with Application to Solar System Ices." This was mostly a progress report, stating that his equipment is ready for studying how various materials that are likely to exist in the outer solar system (like porous ices or methane clathrates) behave at outer-solar-system-like temperatures under icy-moon-like stresses. He invited everybody in the room to suggest materials and conditions for experiments that would provide better-constrained numbers to plug in to all those geophysical models I talked about from the morning sessions. I also wrote down that one of his pieces of lab equipment has the Star Trek-sounding name "cryo-viscometer."

That's about all I can handle writing for tonight. More to come tomorrow!