Ices, Oceans, and Fire: Monday morning: The history and interiors of icy moons

Following an introduction to the meting by Torrence Johnson, the conference on satellites of the outer solar system opened with a session on the early history of moons of the outer solar system, and one on the interiors of these moons. For me, this was a bit of a rough way to enter the conference. These weren't talks about pretty pictures. Instead, both of these sessions dealt with aspects of moons that we can't directly observe. We can't photograph the interiors of planetary bodies, and we can't see in to the past. All we can do is to measure their current states as seen from the outside, and use math (typically, differential equations) to make inferences about what happened in the past, or what's happening inside.

This is a field that benefits from the diversity of sizes of icy moons that have been studied by spacecraft. Each moon started out with a unique amount of mass, with a unique proportion of rock and ice, in a unique position relative to its planet, with a unique amount of initial heat due to its accretion, impact history, and radiogenic heating. So when scientists develop mathematical models for the behaviors of these little worlds, they can test their models by plugging in certain known characteristics of each of these moons (their masses, whether they're currently geologically active, and so on) and see if the models hold up when tested with all these possible endpoints.

This area of research -- geophysics, where you use math to get at characteristics of the planets you can't directly observe -- is actually what I studied in graduate school. But the farther I get from graduate school, the harder it gets to follow such presentations. So my notes are a bit sketchy, but I'll do my best to convey the flavor of what was being discussed.

Links from session and talk titles go to programs and abstracts in Adobe PDF format. 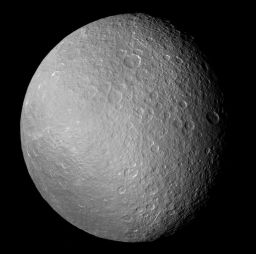 Cassini captured the four images composing this mosaic of Saturn's moon Rhea on May 27, 2007. At about 1,500 kilometers in diameter, Rhea is Saturn's second largest moon.
The session titled "The Early Years: Oceans and Early Evolution" opened with Amy Barr giving a presentation on Formation of the Saturnian Satellites: Constraints from Rhea's Undifferentiated State. Her talk is pretty well summed up by something she said as she was concluding: "If we really want to constrain giant planet formation, we need to send spacecraft to Rhea and Callisto, which are otherwise rather boring satellites." Rhea, at Saturn, and Callisto, at Jupiter, are, to most people, the least interesting large moons at each planet. Evidence suggests that neither one of them has ever been hot enough for their insides to separate into denser rocky cores and less dense icy mantles (a process that is called "differentiation"). Without internal heat, their geologic histories have been pretty uneventful. So they're not too exciting. But Amy points out that the fact that they (apparently) never got hot enough to differentiate has important implications for how quickly the systems of satellites formed at each giant planet. Amy worked through various equations and came to the conclusion that "if Rhea and Callisto are only partially differentiated, then satellite formation ended no earlier than five million years" after the first silicate materials started condensing in the hot early solar system. Amy advocates using Cassini to perform gravity flybys of Rhea to get a better handle on the distribution of mass in its interior; and said that Callisto flybys are really necessary to understand the timing of formation of the Jupiter system.

Next up was Julie Castillo speaking on "Searching for Constraints on the Chronology of the Outer Solar System from Satellite Geophysics." I'm afraid my notes on this one are super-sketchy, but I did write down one quote: "If I can make my own recommendation for a future mission, I would say, 'go to Ariel.'" In fact, the whole day there was a theme of different scientists advocating for different moons being the most interesting one to explore in order to address their own little specialty of research.

And I'm afraid my notes on the talks by Dennis Matson on Enceladus' history and Mark Zolotov on geochemical constraints on outer solar system formation are even poorer than this. As I said, plunging into the geophysics stuff was a bit tough for me -- I resolved, at the break, to do better on the next session.

The next session was titled "What Lies Below: Oceans and Interiors." Adam Showman opened the session with a talk on "The Convective Dynamics of Icy Satellites and Implications for Surface Evolution." Convection happens wherever two conditions are true: a less dense material is overlaid by a more dense material; and the two materials have a viscosity low enough that they can flow over time to fix this fundamentally unstable situation. Now, most people ordinarily would think that something as hard as rock would be too viscous (too resistant to flow) for convection ever to happen, but in fact given a long enough period of time (say, millions of years), even rock will flow. Ice flows much more readily than rock does, so convection is often invoked to explain features on icy satellites. But there are a couple of problems, and Adam was discussing some of these in his talk. He concluded that "An important point that's become obvious in the last five years is that thermal convection alone cannot easily cause surface deformation, because of the low temperatures [and thus high stiffness] at the surface." Convection only happens below a very stiff, non-flowing outer shell. "So it's a puzzle how you can get disruption [of the surface] because of convection."

Kevin Hand gave a talk on "Magnetometer Constraints on the Ocean Salinity and Ice Shell Thickness of Europa" The question of how thick Europa's icy outer shell is has been the subject of very intense debate since the Galileo mission. People base their arguments mostly on the wavelengths of features observed on the surface (that is, on geomorphology) and on geophysics (that is, writing down mathematical equations). Hand described a totally independent measure of the thickness of Europa's ice shell, based upon the strength of the magnetic field. Europa's magnetic field exists because of the influence of Jupiter's magnetic field on the conducting fluid of Europa's subsurface ocean; in fact, it's magnetometer measurements that yielded the discovery of this ocean in the first place. Hand showed that there are limits on how conductive the ocean can be, which are imposed by limits on how saline the ocean can be. Since this conductivity limit exists, he showed, you actually have to have the ocean relatively close to the surface in order to produce the amplitude measured by Galileo's magnetometer -- like within 16 kilometers of the surface. In the questioning that followed his talk, however, it became clear that the amplitude of the induced field is not known that precisely; and since the whole model rests on that measurement, the model is subject to the same imprecision. More magnetometer measurements are needed at Europa. But it's a crafty method to get at Europa's ice shell thickness, and one I'm sure they'll use on a future mission.

Michael Bland gave a talk on "Coupled Orbital and Thermal Evolution of Ganymede: Implications for Resurfacing and Magnetic Field Generation", which I confess I was not able to follow beyond the slide that read in part: "A magnetic field generated by thermal convection requires: that convection occurs in the core; and that there is enough power to overcome ohmic dissipation." The presentation by Hauke Hussmann that followed it, on "Enceladus: Internal Dynamics and Heat Production by Tidal Friction," contained some neat movies of geophysical modeling that tried to explore what internal conditions can give you only one convective plume inside Enceladus, making the south pole and nothing else geologically active, as opposed to more than one plume. When he made Enceladus' core large (corresponding to complete differentiation), he wound up with multiple plumes instead of just one; but smaller cores made single-plume interiors.

Finally, James Roberts presented on the "Long-Term Stability of a Subsurface Ocean on Enceladus." The main thrust of his paper was that, geophysically speaking, it is very hard to come up with a scenario that allows an ocean to survive for a very long time on such a small world. He concluded: "If you really want to maintain an ocean on Enceladus, you need to lower the freezing point of the ocean, but even ammonia-water," which has a freezing point 100 degrees lower than pure water, "is not enough to prevent freezing. You can raise heating in the core, if it behaves in some non-Maxwellian manner that is more dissipative," a statement I'll need to ask someone to explain to me, "or you can raise heating in ice shell through orbital eccentricity or shear heating."

Phew! That was just the morning. There were fewer sessions to write up from the afternoon, and then a poster session that is taking place as I type. Now that I've written up the morning's notes, I'll allow myself to collect a beer and go wander among the posters. More later...