A little good news on the rovers

The skies aren't quite as dark as they have been, for both Spirit and Opportunity. In fact, Spirit has enough power now to be doing a little work with its robotic arm. This news is from a press release issued last night. On Spirit's sol 1276, energy production was up to 295 watt hours. On Opportunity's sol 1255, energy production was up to 243 watt hours. For Opportunity, the power improvement was particularly welcome, because of concerns last week about the rover's falling core body temperature. The good news is that the temperature has increased from -37°C to -33.4°C; it seems there's now enough power for Opportunity to avoid tripping either its survival heaters or a low-power fault. 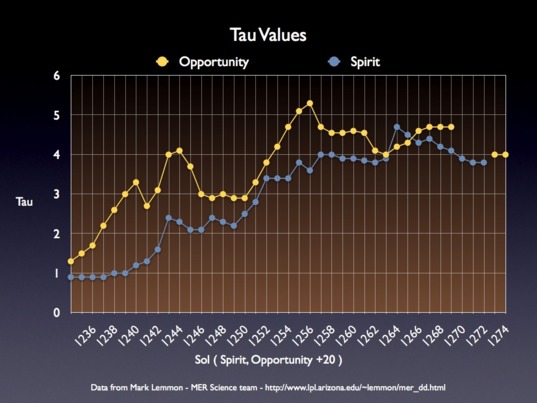 For both rovers, typical values of atmospheric opacity, or tau, hover between 0 and 1. During June and July of 2007, dust storms lofted dust into the atmosphere, increasing the opacity to never-before-seen values above 5. At these levels, less than 1% of the sunlight that impinges on the top of Mars' atmosphere reaches the rovers' solar panels.