The best view of Helene yet

Cassini's current orbit has been a great one for the imaging of Saturn's icy satellites; there have been lots of images of Tethys, Dione, Enceladus, Hyperion, and a bunch of mutual events of various moons with each other and/or Saturn and its rings. However, the most unusual item is Cassini's closest approach yet to Helene. Helene is a very small moon, a lump approximately 36 by 32 by 30 kilometers in size. Unlike most of Saturn's smaller moons, this one isn't close to the rings; instead, it orbits among the much larger round satellites. This one sits in Dione's leading Lagrange point ("L4"), a position 60 degrees ahead of Dione in the same orbit where the gravity of Saturn and Dione balance each other. (There is also a trailing co-orbital named Polydeuces.)

Just to set up the context, here's the best image we had of Helene before Cassini arrived. I went in to the newly calibrated and geometrically corrected Voyager Saturn data set on Helene to get this one, not that it mattered very much; Helene is only a few pixels across, and not much is visible except that it's lumpy and has at least one really big crater.

Voyager 2 captured this image of Helene on August 25, 1981, from a distance of about 341,000 kilometers. This image has been enlarged by a factor of 3.
A year ago February, Cassini swung fairly close by Helene and did take images, though unfortunately the phase angle was on the high side, so Helene was a little less than half lit. Here's Gordan Ugarkovic's best attempt at pulling detail out of the images, which have been released to the Planetary Data System. The image on the left is a Sunlit view, and the image on the right shows details on Helene's night side lit by Saturnshine. The image looks strikingly similar in shape to the Voyager one; can they both have been from the same point of view? 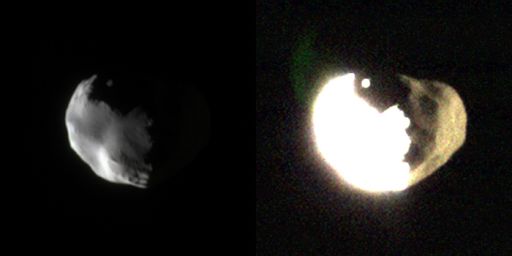 Helene in day and night

These images of Dione's orbital companion Helene were taken by Cassini on February 25, 2006 from a distance of about 68,000 kilometers. The moonlet was lit at a high phase angle so only a crescent is lit by the Sun. Both views are made from the same set of images. The one on the left shows the sunlit crescent, while the one on the right shows details on the night side visible in yellowish Saturnshine.
Another view was taken from an even closer distance, about 50,000 kilometers, on August 16 of last year, but the lighting geometry was really bad. But now, here's the best view of Helene yet, snapped from a distance of 36,000 kilometers, and with much more favorable lighting conditions: 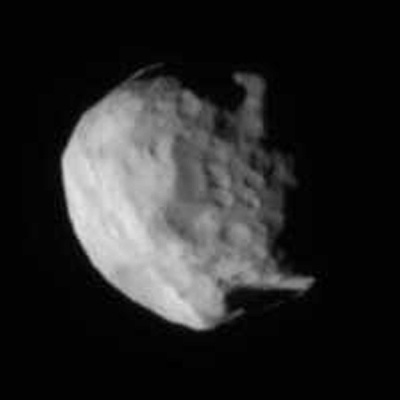 Cassini passed within 36,000 kilometers of Helene to take this image on July 20, 2007. Helene is the leading co-orbital companion to Dione and is a small, irregular body measuring approximately 36 by 32 by 30 kilometers in size. This image has been enlarged by a factor of two.
It's a little hard to be sure, but it looks to me like the edges of Helene's craters are pretty crisp. And there also seems to be some strikingly linear mountain-like features running down the most brightly lit area. Interesting. It's slightly Hyperion-like, though not nearly as strange.

For a better sense of the topography, here's a crossed-eye stereo pair. To see the 3-D view, stare at one and cross your eyes until the two images overlap in the middle of your vision, then try to focus your vision to get the crossed image to resolve into three dimensions. 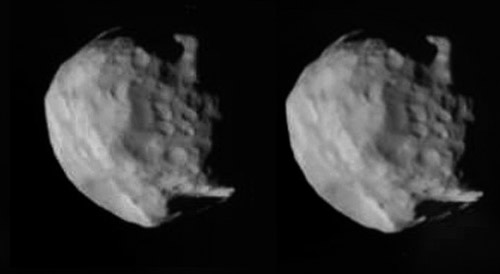 Cassini captured these two images of Helene at slightly different times on July 20, 2007. Since Cassini's point of view shifted in the time between the two images, they can be used to create a 3-D view.
Just for fun, I'll close with a rogue's gallery of some of Saturn's smaller satellites, all shown to the same scale of 1 kilometer per pixel. All of these views are from Cassini. Some of them are a couple of years old -- if anyone knows of better views of any of these moons that I should be using for my scale images, please let me know!