What with parenthood and summer travel and sickness I've gotten horrifically behind on processing my email. My inbox -- an erstwhile sparsely populated place -- contains almost 400 items, a mishmash of press releases, blog readers' comments, mission updates, questions for Planetary Radio, answers from scientists to my questions, and announcements of Tables of Contents for various journals that contain fascinating information but which I have no time to read. None of this is spam, either; I use an absolutely terrific, free plugin for Outlook that employs a Bayesian algorithm to learn what I consider to be spam, and it works like gangbusters. (It's called SpamBayes and I can't recommend it more highly.) And yet I still have almost 400 emails in my inbox.

Things stay in my inbox for a long time because each time I try to go through and process them, they take too much thought for me to deal with immediately, but are too interesting for me to delete. So with apologies for my lack of organization, I'm going to go through some of the stuff and try to clear the backlog by sharing with you some of the things I've found too interesting to delete over the past four months. This is going to take a while, so expect to see this subject again (but hopefully modified to a smaller number). As I go along, I'll also be responding privately to some of you whose comments and questions I've ignored for many months.

Someone asked me -- back in January, yikes! -- whether ESA and NASA share data much, or whether each agency "goes it alone" with regards to using each other's Mars data -- "or is there some cultural bias that they prefer to use their own data instead?" There are certainly some laws that prevent the sharing of engineering data between the space agencies. In particular, there is a deeply annoying (to the space community) set of American regulations called ITAR (pronounced "eye-tar" and short for International Traffic in Arms Regulations) which controls the "export" of defense-related technology and services to foreign countries. Although well-intentioned for sure, ITAR has had a strangling effect on cooperation between NASA and foreign space agencies and researchers. There are a great many absurd examples, but one of my favorites is how some scientists, citizens of European Union countries, were for some time not permitted to log on to computers provided in Mars Exploration Rover science operations facility, something they needed to do in order to develop commands for instruments they had built and provided to the mission. A lot of engineering data from spacecraft is considered ITAR-sensitive and unshareable between NASA and all those dangerous "ferriners" out there. Fortunately, the data returned from science instruments is usually not considered to be ITAR-sensitive. Even better news is that space agencies are doing a better and better job of requiring that science data be archived in well-described, digital formats, in archives accessible via the Internet, so that more and more, scientists from all nations can achieve easy access to science data provided by any other nation's mission. So although technical cooperation between American and other space agencies is a bit difficult, scientific cooperation is not. Since space science missions began, in fact, scientists have looked for ways to share what they've learned with their peers in other countries, even across the Iron Curtain.

A related question that I was asked in April was: why has ESA released so little information from Venus Express as compared to what they have released from Mars Express? I've asked this question myself, and the answer always seems to come down to an unsatisfactory one, relating to a difference in personality between the missions, science teams, and national space agencies involved. ESA is much less centralized an organization than NASA, and doesn't seem to have the power that NASA does to motivate its member instrument teams to be forthright with public data releases. The camera team on Mars Express has been doing a very good job with public image releases, especially now that they've made their archived data so accessible to the public via their HRSCview data explorer. The Venus Express camera teams have not chosen to provide so much to the public.

Back in March I asked Julie Castillo for a copy of a fascinating paper she had in press on Saturn's moon Iapetus. In the paper, titled Iapetus' geophysics: Rotation rate, shape, and equatorial ridge," she and her coauthors examined the moon's shape and found that it must once have been spinning relatively rapidly -- once every 16 hours -- in order to have developed its currently fat equatorial bulge, and then frozen totally solid in that shape, so that its spin bulge has not "relaxed" even though the moon now rotates much more slowly, once every 80 days. Last week NASA and JPL both issued press releases, though the paper has not actually reached publication yet. I still don't have the time necessary to do this story justice, so I'll send you over to Phil Plait's excellent explanation at Bad Astronomy. 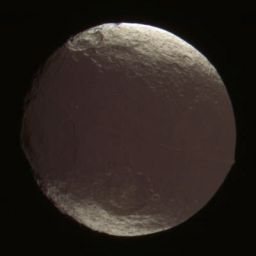 This is a raw, unprocessed, uncalibrated image captured on December 27, 2004 as Cassini approached Iapetus from a distance of 762,036 kilometers (473,507 miles). It is composited of three views captured through ultraviolet, green, and infrared filters to bring out compositional variations across the sunlit hemisphere of Iapetus. Three huge impact basins are visible in this image, including a giant multiringed structure within the dark region on the left. A sharp, linear ridge crosses the center of the disk, looking like a conical mountain that pokes up from Iapetus's limb on the right. Iapetus is noticeably oblate (i.e. "fat"), much more so than you would expect for a body that rotates only once every 80 days.

Several different software developers responded to my April story about the failure of Mars Global Surveyor with ruminations based on their own experience. One wrote, "When a system like that fails from "human error", one wonders what is being called an error. The entry of the bad data? The lack of a data table cross check on the ground? The addressing scheme? The lack of automated self tests built in by the designers? Even deciding what to label as the "error" is in itself an engineering judgement; an artful choice. The overall engineering, in order to get so much out of the machine, delved so far past math and science and into the _art_ of engineering that I'm more inclined to think of this not as an error but as a less beautiful note in a rather grand symphony." Another wrote: "The MGS operators back on Earth should never have been manually setting pointer values; it should have all been abstracted away from them. Their responsibility should just have been setting the values that mattered (say, the direction for the antenna, perhaps filled out in a form), and have a wrapper decide what pointer use, if any. The operators shouldn't know and shouldn't care; humans are unreliable. The wrapper won't mess up. The operator might. Oh well. At least I can take comfort from the fact that this code was written in the early to mid 90s when these ideas were first becoming mainstream, by people who probably grew up programming in languages that are nearly extinct nowadays. I wouldn't expect this kind of error to happen with newer craft."

Also in April, researcher Matthew Hedman kindly supplied me with his recent paper on changes in Saturn's D ring since Voyager, "Saturn's Dynamic D Ring." This work is the formal publication, years in preparation, on some exciting observations that were first reported to the public back in 2005:

A view of the D ring from Cassini is compared to a view from Voyager at comparable viewing geometry. The boundary between the C ring and D ring is marked on the Cassini image by a green line. The C ring is overexposed in the lower left corner of the Voyager image. The outer D ring feature called D73 lines up perfectly between the two images, separated by 25 years. So does an inner D ring feature called D68, near the right sides of the two images. But in the middle, the brightest feature in the Voyager image, called D72, does not line up with any feature in the Cassini image. The inset view shows the region outside D73 with its closely spaced wavelike features, so regular that they could be the grooves in a vinyl record.
One of the challenging things that Hedman and his coauthors describe about studying the D ring is how its appearance changes with longitude, the angle of solar illumination, and even with whether Cassini is looking at the rings on the near side or the far side of Saturn. The paper contains this neat wireframe diagram, which shows how vertical corrugations in a thin ring, when seen from a nearly edge-on point of view, can produce ringlets that appear dark when they are on the far side of Saturn, but bright when they are on the near side of Saturn. Follow one of the dark areas around the ring, and see how it turns from dark to light as you go around. Hedman estimates that the D ring has vertical corrugations rising about 0.5 to 1 kilometer above and below the ring plane; the finest corrugated structures seem to have wavelengths of about 30 kilometers.

This sketch illustrates how vertical corrugations in a planetary ring can lead to contrast reversals (where ringlets that are light on the near side of the ring plane appear dark on the far side, and vice versa). This wireframe diagram displays a flat ring onto which is superimposed a vertical wave pattern. The view is shown from nearly edge on. Where the spacing of the lines of the diagram are closer, one would expect a ring to appear more optically thick along the line of sight, and so a faint ring would appear brighter. Furthermore, note that all features show a brightness transition as they cross the ansa: brighter features become darker, and darker features become brighter.
Phew! That's taken me down to less that 350 emails in my inbox, and has gotten me in to May. I guess that's progress!