Will Phoenix' thrust raise too much dust?

A reader just emailed me a question about the Phoenix landing system, and it's one I've been asked repeatedly, so I thought I'd address it here. The question was, "I have been wondering if the exhaust from the retrorockets will not modify the very area that Phoenix will study (as it cannot move away). I am sure they thought it out, but I am curious if it is a significant effect?"

The basis of the question is correct. Phoenix descends to Mars on hydrazine thrusters. Hydrazine is a simple nitrogen-hydrogen compound (N2H4), highly useful for small thrusters on space missions because it serves as its own oxidizer -- which is to say, it doesn't depend on there being a supply of oxygen around (as, say, gasoline does) to help it burn, so it makes for a simple one-chemical thruster system. Anyway, those thrusters are, of course, pointed groundward, so as the spacecraft touches down the thrusters are blasting away at the surface. This does three things, as far as I see it: they blow away dust (or at least they blow it in to the air), they heat the ground, and they probably contaminate the ground with hydrazine.

The Phoenix team has of course been aware of the potential problems with their landing system since they first conceived of the mission, and they've always expressed confidence that they'll be able to accomplish their science goals without any serious problems caused by the thrusters. One thing to remember is, as principal investigator Peter Smith said during last week's press conference, Phoenix is a vertical mission, not a horizontal one. That is, it's not (particularly) interested in surveying what's on the surface, it's instead focused on digging below the surface. So even if the thrusters do some unexpectedly nasty stuff, the effects should just be surficial, and once that arm digs down the team will get to unadulterated material.

Still, it's a concern, especially for those instruments that do plan on performing very close analyses of materials picked up from the surface. Deborah Bass, the mission's deputy project scientist, wrote quite an amusing blog entry on the topic two years ago, in which she likens Phoenix blasting its landing site to hydrazine to a puppy messing its kennel:

Okay, no big deal right? Characterize the stuff and move on. Weeell, not so easy. This stuff is going to react with our soil chemistry and change what we see. What is worse, there are contaminants in the hydrazine--the stuff isn't pure! Even the really ultra-pure stuff still has organic compounds in it, and those compounds will contaminate our landing site and react with the unknown Martian soil chemistry.

Okay, so this spray will be kind of an even distribution all over our landing site, in a reasonably low concentration. However, turns out that after we land, there will be some residual hydrazine in the hoses leading up to the spray nozzles, and based on our thermal analyses, these hoses will experience a wide range of temperatures, causing the fuel to freeze (contract) and thaw (expand). This freeze-thaw cycling is likely to cause the hoses to burst, producing a high concentration of this fuel and contaminants right in the location we plan to dig.

How to solve this? We're looking for puppy diapers. Lockheed Martin, who is in charge of the spacecraft, is going to put some baffling around the hoses on the side of the lander nearest our digging area. That way, it can both absorb and funnel the foul hydrazine to a location that is less important.

That way, we don't have to worry that our lander isn't house-broken. We'll just clean up the mess.

The science team is also working hard to characterize the fuel, so that we understand as much about it as possible.

Sometimes you just have to forgive puppies. At least they have fuzzy faces and lots of kisses.

One thing that the Phoenix team is doing to see what effects they can expect from the thruster-assisted descent is to perform simulations of thrusters blasting Martian analog materials. There's a researcher working on this right now, Ph.D. student Manish Mehta, under the guidance of Nilton Renno of the University of Michigan. Mehta outlines the concerns for the Phoenix mission in a paper presented at the recent American Institute of Aeronautics and Astronautics conference:

The impingement of supersonic plumes with the ground can excavate the surface during landing. Once the shear stress due to pressure perturbations caused by plume impingement with the surface exceeds the bearing capacity of the soil, ground failure occurs. This failure can lead to site-alteration, crater formation and the lifting of large quantities of sand and dust. The main reason for concern is that this may lead to lander instability, damage of its underside, and alteration of the surface of scientific interest. Dust lifting and settling on the lander can cause instrument contamination and perhaps failure. This could also decrease the overall power available to the spacecraft because of the settling of lifted dust on solar panels. Investigations of site alteration by supersonic pulsed jets and dust lifting and deposition during spacecraft landings have not been reported in the literature yet.

(Emphasis theirs.) This sounds pretty dire, but it's important to note that this introduction to the work is merely speculation on the kinds of disasters that can happen; now they'll do work to investigate experimentally what will actually happen when Phoenix gets to Mars.

As described in a Michigan press release, Mehta and Renno have built a Plexiglas shower stall fitted with a downward-pointing high-pressure gas nozzle which shoots nitrogen gas instead of hydrazine. (They don't say why, but I assume it's because nitrogen is inert and still made of nitrogen, a component of hydrazine, whereas hydrazine is probably something that you'd think twice about messing with in the lab, especially if you could substitute something safer.) They have done some preliminary tests under Earth conditions and concluded that the pulsing landing rockets, when they impinge on the ground, produce "pressure perturbations [that] may cause soil liquefaction and gas-soil bursting which can lead to substantial soil erosion." That doesn't sound good -- or at least, it sounds important to continue studying the problem and develop closer analogs for Mars conditions. 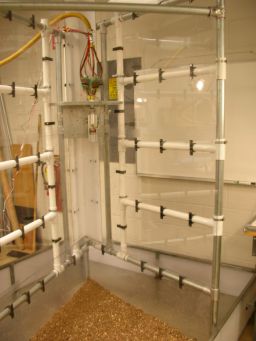 Phoenix' landing site in a shower

University of Michigan researchers Manish Mehta and Nilton Renno are studying the problem of how Phoenix' descent thrusters will modify its landing site. At the top of this Plexiglas shower stall is a jet that shoots high-pressure nitrogen gas at a simulated Mars surface on the floor.
To continue the work, they are taking the whole apparatus to NASA's Ames Research Center, where they'll operate it in a vacuum chamber that'll simulate Mars' air pressure, which is less than one percent of Earth's. The Michigan release said the trip to Ames would happen this month, but Renno just told me that the work has been postponed until September because of a change in management of the Mars chamber there.

One interesting detail of the experiments is what they've chosen for simulating the soil on the Martian surface during their Ames experiments: crushed walnut shells. Walnut shells? Why would they use walnut shells instead of something that's closer to the composition of Mars soil, like, say, dry clay or ground-up basalt rock? Apart from the fact that crushed walnut shells are widely and cheaply available in large quantities (the material is used as a "soft abrasive" for sandblasting applications, like graffiti removal -- a Google search shows it's even used to clean aircraft engine turbines!), it's better for this use than sand because of one physical property of Mars that we have a real tough time simulating on Earth: its gravity. NASA Ames can simulate Martian pressure and temperature and wind but, sadly, Ames' vacuum wind tunnel is not equipped with an antigravity device that can take its interior down to 38% of Earth's gravity. In lieu of breaking the laws of physics, engineers must substitute materials that have roughly 38% the density of the materials found on Mars. Walnut shells have a density of 1.28 g/cm3, and if you divide that by 0.38 you get 3.4, which is not far off the density of mafic Mars-like rock. Clever!

Speaking of Phoenix, part of this week's Planetary Radio show, which Mat Kaplan recorded at the 7th International Conference on Mars held at Caltech last week, includes a discussion with Ken Tanaka on Phoenix' north polar landing site. Check it out! I had intended to report on more news from the conference last week, but sadly I fell ill and wasn't able to attend. Too bad.