The dust storm has brought gloom to Opportunity's skies, but everything is OK

I feel a little sorry for the Phoenix team, because their press conference yesterday was horned in on by not one but two other space missions' problems. First, the Dawn launch delay, which I talked about earlier, and then, a reported power problem with Opportunity. (They actually closed with a third distraction, some discussion about Mars sample return, which I'm afraid I didn't have time to listen to.)

So to get all the distractions out of the way before I finally sit down and write about Phoenix, I'm hereby quoting all of what Doug McCuistion, NASA's Mars Exploration Program Director, had to say about the current dust storm and what it's doing to Opportunity.

[For] Opportunity, where an unpredicted dust storm has blown up, and frankly Opportunity has ceased operations for a couple of days because the amount of sunlight available is low.

Reporter: Can you give more detail on opportunity's status? McCuistion: As of this weekend, the dust levels are -- we measure sunlight levels in tau. The tau for Opportunity is the highest we've actually experienced it. We're trying to validate what level the Viking missions saw but we think we might be above those numbers currently. So the power levels, we normally run 600 to 700 Watts on Opportunity, but we're down around 250 Watts right now, so there's not a lot of activity. Spirit is fine. There's not a lot of dust around that side of the planet, whether it will transition itself or move around the planet, we don't know. But right now Spirit is not being hampered by the dust storms.

Reporter: is the situation life-threatening for Opportunity? McCuistion: [confidently] Oh, the spacecraft certainly can survive this. We have the ability to charge the batteries below 100 Watts. We can do imaging even below 100 Watts. So we can select the instruments we want; we don't communicate with the orbiters as frequently. Actually, one of the unique things here. We have a dust storm going on, but the amount of wind going on has actually cleaned off the arrays. [laughs] So when the dust storm is gone we expect better power levels than before the dust storm started. So it's fine. We just have to temporarily suspend most operations, but it's not a life-threatening situation.So the dust storm taketh away, but the dust storm giveth: dark skies and little power now, but when it all blows over, Opportunity should be cleaned off, and thus achieve much higher power levels than before.

I was quite surprised though when McCuiston said that Opportunity could get by on 100 Watts. Last Martian winter, there was talk of Spirit struggling to survive with less than 250 Watts. Perhaps the season makes a difference; the southern summer solstice on Mars was on July 4 -- but with Opportunity's location nearly on the equator, I wouldn't have thought that season was particularly important. Maybe it's possible for the rover to "survive," doing nothing but that, at such low power levels. I'm not sure. I'm hoping to run in to some Mars Exploration Rover people this week who could explain the issue to me.

Just for fun, here's an image showing what things on the ground looked like for Viking 1 when it encountered its worst dust storm. Viking 1 wasn't solar powered, so it was unaffected. Opportunity, though, is trying to draw power from the enfeebled Sun in its sky, and will have to wait for things to clear up before it can start doing science again. 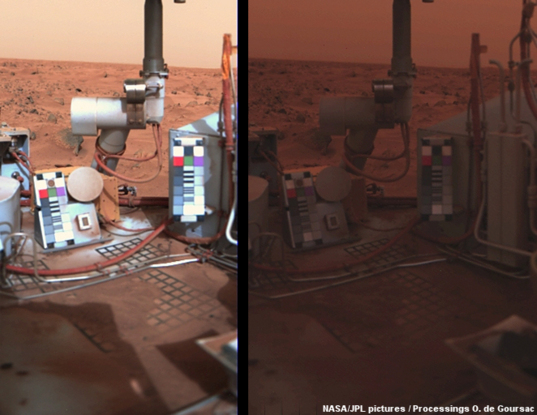 A comparison of two Viking 1 color images taken on sols 282 and 324 shows how a Martian dust storm severely limited the amount of sunlight reaching the ground. "Tau," a measure of the sky's opacity, was very high, between 5 and 6.