On July 4, 1997, a small spacecraft bounced to a landing on the surface of Mars, encased in protective airbags, and unfolded like a flower to open a new Mars vista to view. 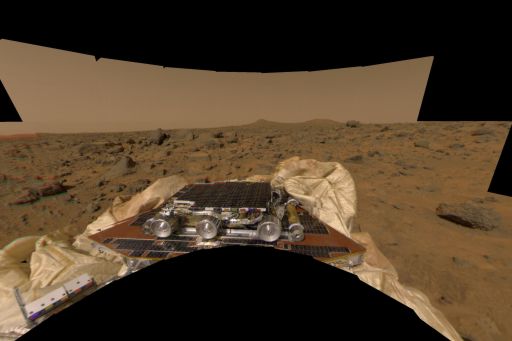 The rover Sojourner sits in its flight configuration on one petal of the Pathfinder lander. The paired ramps that would allow Sojourner to roll off the lander have not yet been deployed. Pathfinder scientists used this set of images to determine whether it was safe to deploy the ramps.
I asked a couple of people at the Society for a few thoughts on the significance of Pathfinder. Lou Friedman told me that the name of the mission was carefully and meaningfully chosen. Pathfinder was intended to represent a new way to do Mars (and more generally, planetary) exploration -- bolder, cheaper, more innovative. It was intended to be the first of many "netlanders" on Mars, small, relatively inexpensive landers. That didn't wind up happening, but the mission did blaze the trail for a whole new style of planetary exploration to follow, and, perhaps more importantly, it produced a huge class of bright, young, creative, experienced staff at JPL who would go on to build and operate the incredibly successful Spirit and Opportunity rovers as well as myriad other exciting projects. It led directly to the highly successful Discovery and new Scout programs, with their low-cost, rapidly constructed spacecraft.

Charlene Anderson's memories came from the Planetfest event that The Planetary Society was holding concurrently with the landing. She said that Pathfinder's project manager, Tony Spear, came down to Planetfest just after the successful landing to give a speech. He had two surprise announcements to make to the crowd. One was that they were naming the landing site the Carl Sagan Memorial Station in honor of the Planetary Society founder, who had passed away just months prior; and the second was that all the names of The Planetary Society's members had landed on Mars with Pathfinder (including all the names that had landed on the bottom of the ocean when they launched, and returned catastrophically to Earth, on Mars 96). Since then we've sent our members' names on lots of missions, but their first landing on Mars was a big surprise.

A rover's eye view of the Pathfinder lander

This image of Pathfinder was captured by the Sojourner rover's left front camera on sol 33. The Pathfinder camera (on the lattice mast) is looking at the rover. The airbags form a billowy mass around the lander, and the meteorology mast sticks up to the right. The lowermost rock is Ender, with Hassock behind it and Yogi on the other side of the lander.
I wasn't at the Society in the summer of 1997; I was in Chicago, between the two years I spent teaching science to fifth and sixth graders at Lake Forest Country Day School. To earn extra money I was working as an office temp, and to keep challenging myself I was volunteering at the Field Museum in their geology collections. I do not remember where I was or what I was doing when Pathfinder landed on Mars and that little rover put wheels onto the surface of another planet for the first time. You might think it had had little effect on me. 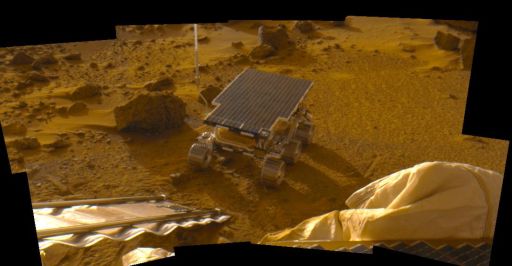 This 8-image mosaic was acquired by Mars Pathfindder during the late afternoon (near 5 pm Local Solar Time, note the long shadows) on Sol 2 and shows the newly deployed Sojourner rover sitting on the Martian surface.
But somehow Sojourner crept into my subconscious. That next school year, when it was time for me to organize the fifth grade's annual Space Simulation project, I pounced upon a new product in one of my educational toy catalogs, a set of LEGO parts that would permit my students to simulate a rover mission to Mars. (This product, called Red Rover, Red Rover, was developed with the help of The Planetary Society, a fact that I had forgotten by the time I interviewed for a job working at the Society on the Red Rover Goes to Mars project in 2001!)

Not wanting to slavishly repeat NASA's explorations, I and my students chose instead to send our LEGO rover on a mission to explore three of the moons of Jupiter, building little rover environments with Europan double ridges, Ganymedian grooves, and Ionian volcanoes. Sadly, on the appointed day of the kids' Space Simulation, a catastrophic anomaly made the rover portion of our simulated mission a failure -- one of the students spilled a cup of water on the laptop computer in Mission Control that controlled the rover, and we were unable to bring a backup system online before the end of the simulation day. Let that be a lesson to you, NASA! Have your backup systems ready -- and while you're at it, don't allow your students to use (and destroy) a computer that also contains your only digital records of their grades...

It was that space simulation project that got me thinking that I could maybe follow the educational path that I'd started by majoring in geology to other worlds. The very next year, I began graduate school in the Planetary Geosciences department at Brown University. So in a way, Pathfinder blazed my path into planetary science. I wonder how many other young people were inspired by that mission? 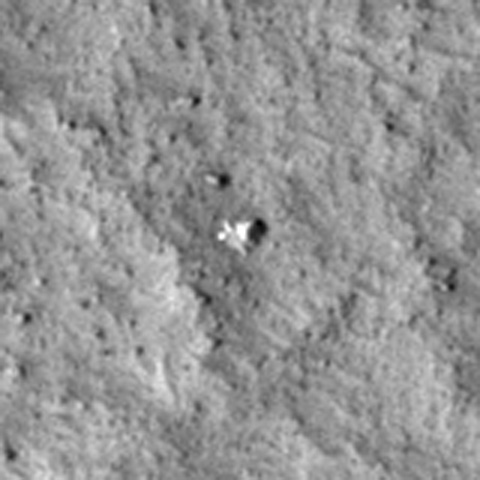 Mars Reconnaissance Orbiter HiRISE captured this image of the Mars Pathfinder Lander in Tiu Vallis on December 21, 2006. The triangular lander shows up brightly against the background; the two ramps for Sojourner are visible at 6 and 11 o'clock. The large rock named "Yogi" sits to the north of the lander, and the cluttered "Rock Garden" to the south. This image has been enlarged by a factor of 3 from its original resolution of 25 centimeters per pixel.