Cassini views of Tethys and Mimas

Cassini has just passed the periapsis (closest approach) of its 48th orbit of Saturn, and this time around there were two icy moons in position for the spacecraft to catch some pretty pictures as it flew by: Tethys and Mimas.

Cassini approached Tethys with a crescent view of the moon. This mosaic was assembled from three images captured on approach; there are lots more close-up images from the flyby on the Cassini raw images website, but I thought these provided the nicest view. 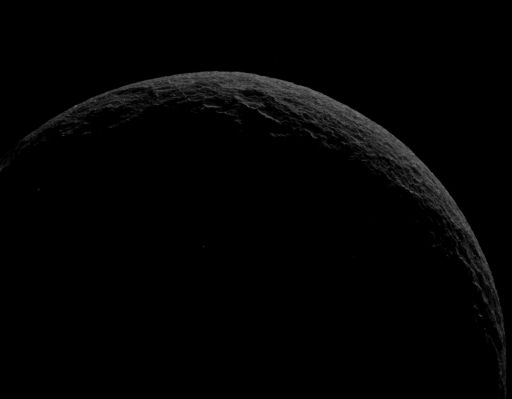 Cassini captured the three images necessary to create this mosaic of a crescent Tethys as it approached for a close nontargeted flyby of the moon on June 27, 2007.
After the Tethys flyby, Cassini turned and captured a nice multispectral set of images on a well-lit Mimas. Mimas' signature crater Herschel is just peeking over the terminator (day-night boundary) on the left. 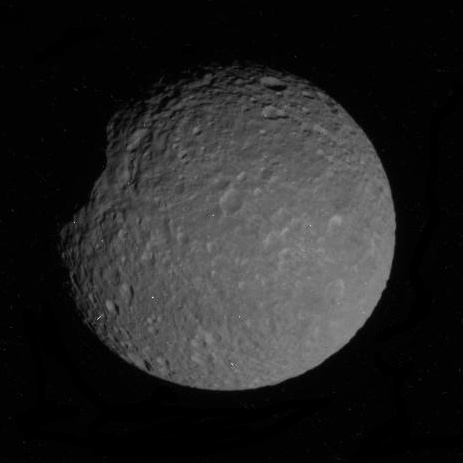 Cassini took this photo of Mimas on June 27, 2007 from a distance of about 180,000 kilometers (110,000 miles). The giant crater Herschel is on the terminator at left.
Cassini is now approaching for a close flyby of Titan that'll happen tomorrow. This flyby is one of three in the primary mission devoted to radio science, where giant radio dishes on Earth will very precisely track Cassini's radio signals as it flies by the moon. The tracking information from this flyby, combined with the previous two radio science flybys, should provide data that could discern whether or not Titan has an internal ocean! I've got no idea how long it takes to get results from radio science analyses, but I think I can safely predict we won't hear the results in the news next week. I'll keep my ears perked up for any news. Just based on geophysical modeling it is strongly suspected that Titan has an internal layer of liquid water (like Ganymede and Europa), but this radio science data could provide empirical evidence.