Yesterday the Applied Physics Laboratory released the first few images from MESSENGER's second flyby of Venus; in all, 614 images were captured during the flyby. Here's one frame-filling global view: 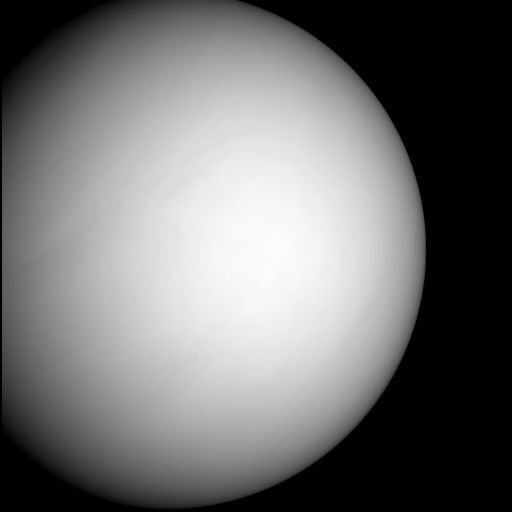 MESSENGER snapped this image of Venus as it approached for its second flyby of the cloud-shrouded world on June 5.
Sadly, Venus is pretty bland when viewed with anything but a cloud-penetrating radar system like the ones on the Veneras and Magellan. But as I stared at the image I thought there might be some hints of cloud details. How to make those clearer? The very faint variations in the brightness of the globe caused by clouds are swamped by solar incidence angle effects -- meaning that where the Sun is shining directly down on Venus, it's really bright; where the Sun strikes Venus at a flatter angle, it's less bright; and those variations are much larger in magnitude than the faint variations from the clouds. I wanted to filter out this long-wavelength variation, leaving behind the shorter-wavelength variation. So, in Photoshop, I played around with high-pass filtering (pretty slavishly following an online tutorial on how to do this) and came up with a version that shows much more cloud detail. (There's also some overall lumpiness that may be caused by the fact that the version I started with was in JPEG format, so that could have introduced some small-scale irregularities. The lumpiness may also represent real features; I'm just not sure.) 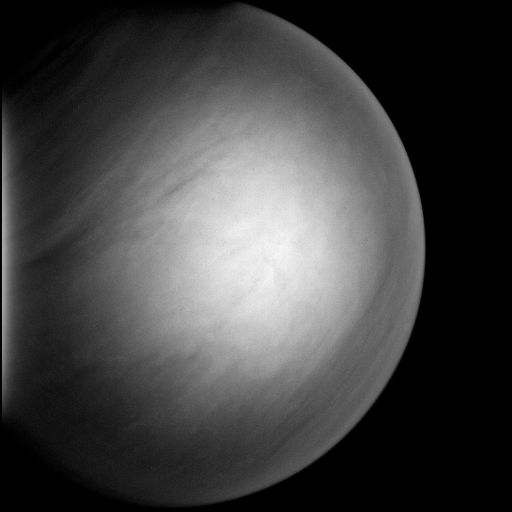 This version of MESSENGER's approach image of Venus has been high-pass filtered to emphasize shorter-wavelength variations across the globe due to features in the clouds.
I'm looking forward to the rest of the photos from this encounter, but not nearly as much as I'm looking forward to the first Mercury flyby. That's what MESSENGER was built to do, and it's coming up soon, in January. The Venus flyby has lined them up perfectly for it, too; principal investigator Sean Solomon was quoted in the release as saying: The spacecraft hit its aim point to within 1.3 kilometers (0.81 miles), removing the need for another trajectory correction in July. Every instrument returned data from the Venus encounter, and the Science Team is hard at work analyzing the new observations. We plan to release further data as fast as we can."

On an unrelated topic: Luke Dones corrected me on Atlas' role in Saturn's ring system; I've now edited the entry. Thanks Luke!