UPDATE: I was behind on my exploration of Atlas' relationship to Saturn's rings -- the entry is corrected below. (Thanks to Luke Dones for the correction.)
assini just swung by Saturn on the closest approach of Rev 46 on its way to its 33rd close flyby of Titan, and this time its path happened to bring it by Atlas. Atlas is the "ringmoon" of Saturn that orbits just outside the edge of the main ring system When it was first discovered, it was thought that Atlas was responsible for corralling the A ring's particles into its sharp outer edge, but Luke Dones tells me that Atlas has nothing to do with it; it's two slightly larger and more distant moons, Janus and Epimetheus, that keep the A ring edge sharp through a 7:6 orbital resonance. Atlas undoubtedly does have effects on the A ring, but they're more minor.

Here's an image I put together from three raw images taken through red, green, and blue filters. 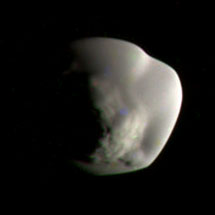 Cassini flew to within 40,000 kilometers of Atlas on June 12, 2007 to capture this view of the unusually-shaped moon. The view is toward Atlas' south pole.
You may notice that there are some funny-colored spots on the image. Those aren't real features on Atlas; they appear where I attempted to erase noise caused by charged particles hitting the camera detectors. I didn't want to take the time to do a more careful job, knowing that the imaging team will probably eventually release a much better version using the high-quality uncompressed data rather than the JPEGgy stuff that's available on the raw images website.

I checked through the data that has already been released to the Planetary Data System by the imaging team, and found only one other set of red, green, and blue images of Atlas that were taken from close enough to show good detail on the surface. To my surprise, as far as I can tell, this set of images has not been turned in to a formal image release by the imaging team, so I did my best to put them together. The image was taken on June 8, 2005 from a distance of approximately 162,000 kilometers.

Three images through red, green, and blue filters have been combined to create this color view, which is also enlarged by a factor of two. The view of Atlas shows a saucer shape, 46 by 20 kilometers in size. Atlas' equator appears to have swept up fine ring dust, obscuring any impact craters and bulging its equator. Image data is from the official Cassini data release on the Planetary Data System.
Atlas is very small and very strangely shaped, as you can see by its different appearance in these two Cassini views. The current best explanation for Atlas' odd shape is that, located as it is so close to the rings, it accretes fine ring dust onto its surface. With Saturn's rings being amazingly flat, the accreted dust preferentially lands near Atlas' equator, filling out its equatorial bulge all the way to its Roche lobe. Any dust that attempts to accrete beyond that limit experiences centrifugal force equal to the tiny force of Atlas' gravity, and can't stay in place. However, this explanation is far from certain.