There's been quite a lot of Mars on this page for the last week; it's time to remind ourselves that there are other places besides Mars in the solar system. Cassini obliged this week with some nice "nontargeted" flybys of several of the icy moons of Saturn. "Nontargeted" means that Cassini didn't line up for these encounters with thruster firings; the moons just happened to be in decent positions for imaging as Cassini traveled between Titan flybys. These images were taken just before Cassini wheeled around Saturn in the middle of orbit number 45, toward the "T31" encounter with Titan, which happened on Monday.

First, there was this nice one of Mimas. It's different from some earlier views of Mimas in that we see the giant crater Herschel sunlit. This lighting geometry emphasizes albedo (brightness and darkness) differences across Herschel. 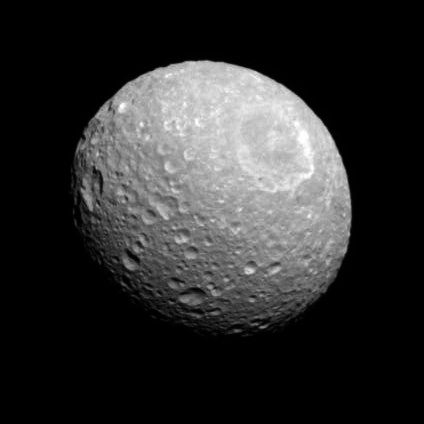 Cassini captured this image of Mimas on May 27, 2007. Unlike many earlier images of Mimas, this one caught the giant crater Herschel fully lit. Cassini is looking at Mimas slightly from below, seeing the south pole.

For comparison, here's an earlier view of Mimas where Herschel receives more glancing sunlight; this lighting geometry emphasizes topography across the crater. 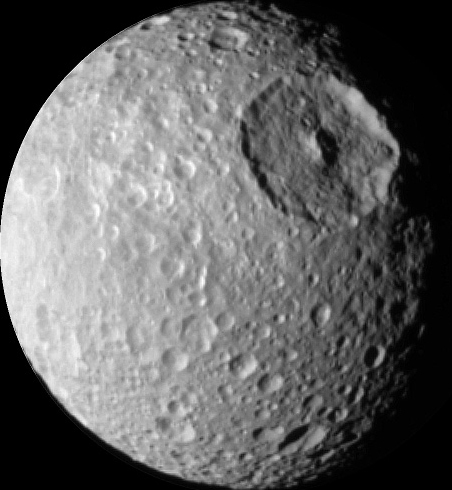 The giant crater Herschel sits on the edge of Mimas, whose pockmarked surface indicates great age.

Next up is this nice view of Dione at nearly zero phase (that is, nearly fully lit). Also in the field of view is a very bright spot. Is that bright spot one of Saturn's small moonlets? No -- it's a star, and a very bright one at that, Regulus. I looked it up and Regulus is the 21st brightest star in the sky. The photo was part of a series timed to catch Regulus passing behind Dione. During this event, called an occultation, the UVIS instrument stared at the star, watching how its light might (or might not) change as the star approached and then passed behind the moon. The UVIS team is looking for a very tenuous atmosphere at Dione, and the fortunate alignment of the moon with such a bright star will give them the best possible chance to find it, if it's there. 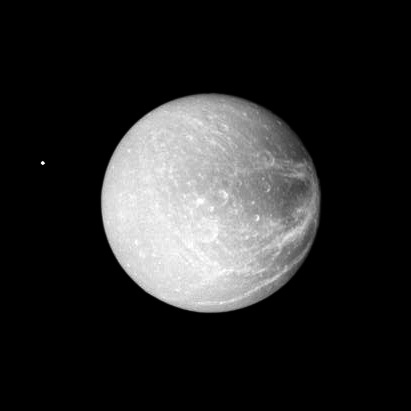 Cassini captured this view of Dione on May 27, 2007. There is also a bight spot spanning several pixels in the field of view. This isn't another moon -- it's Regulus, which, at an apparent magnitude of 1.35, is the 21st brightest star in the sky. This image was captured as part of an observation with the UVIS instrument of Dione occulting Regulus; scientists were searching for evidence of a tenuous atmosphere around Dione.

Finally, there's this view of Rhea, which I cobbled together from four images taken through an ultraviolet filter. It's rare that Cassini gets close enough to these icy moons that the moon more than fills the camera's field of view. With the images of Mimas and Dione above, I rotated the views so that north was approximately up. For this one, I'm afraid that I couldn't figure out which way was up. This face of Rhea has no easily distinguishable features, just lots of overlapping similar-sized craters, and try as I might, I couldn't squint at any of my maps of Rhea and match the craters in this picture to the craters on the maps. All the other icy moons have big basins and canyon systems or "wispy terrain" -- Rhea is much less distinguished. 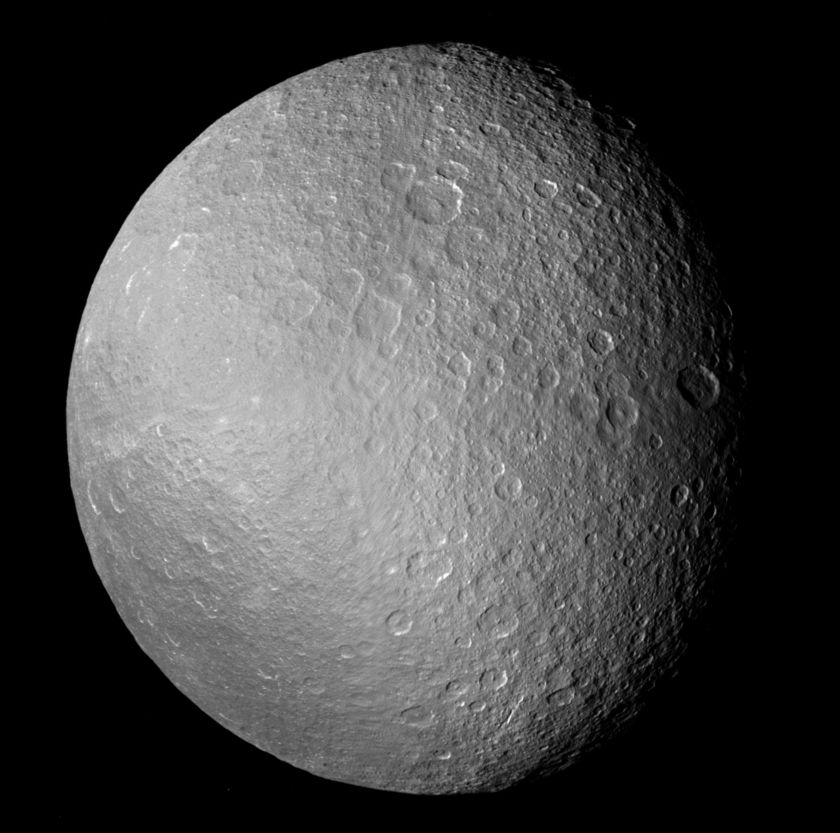 Cassini captured the four images composing this mosaic of Saturn's moon Rhea on May 27, 2007. At about 1,500 kilometers in diameter, Rhea is Saturn's second largest moon.

These three images are a harbinger of what's to come. For quite a long time Cassini has been orbiting out of Saturn's ring plane. These orbits have been great for getting dramatic views of the planet and its rings, and also for mapping out the planet's magnetic field and plasma environment, but they've permitted relatively few flybys of the icy moons. Now Cassini is getting back down into the ring plane. Traveling on an elliptical path in the same plane as all the moons, Cassini will once again be getting regular opportunities to photograph them. I haven't been paying very close attention to the Cassini raw images page for a while, but it's time now for me to start doing that again -- we should be getting lots of these kinds of goodies from the icy moons for the next year or so!