Cassini has just begun its 44th orbit of Saturn (called Rev 43), and is starting it off with lots of views of famously two-faced Iapetus. Most of the time, when Cassini gets good views of Saturn's moons, the spacecraft is close to its periapsis (closest approach to Saturn). That's because the size of Cassini's orbit is such that its periapsis occurs in the neighborhood of the orbits of the inner medium-sized moons (like Mimas, Enceladus, and Tethys), so Cassini's best views of those moons are near periapsis. Iapetus orbits much farther from Saturn, and for most of Cassini's mission, the spacecraft's orbit rarely takes it as far out as Iapetus. Consequently, the best views of Iapetus tend to come around apoapsis. Of course, there's no guarantee that Iapetus will be near Cassini on its huge orbit at the same time that Cassini is near its apoapsis, so most of Cassini's views tend to be quite distant ones, from distances of a couple million kilometers. Here's a couple of nice recent ones

These views feature Iapetus' trailing hemisphere, which is its bright hemisphere. Remember that Iapetus, like nearly all moons in the solar system, is locked in synchronous rotation with Saturn, so that the same face (the "sub-Saturnian hemisphere") points toward Saturn all the time, which means that one side always faces forward along the orbit, and one side always faces the rear. Views of the trailing hemisphere with nice sunlight represent a bit of a change. For much of Cassini's mission, the best views have been of the leading hemisphere, or of the sub-Saturnian hemisphere. When the mission began, Cassini's apoapsis occurred on the dawn side of Saturn, and the best sunlight tended to fall on Iapetus' leading hemisphere: 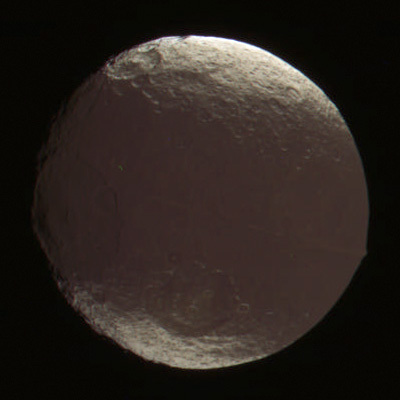 This is a raw, unprocessed, uncalibrated image captured on 27 December 2004 as Cassini approached Iapetus from a distance of 762,036 kilometers (473,507 miles). It is composited of three views captured through ultraviolet, green, and infrared filters to bring out compositional variations across the sunlit hemisphere of Iapetus. Three huge impact basins are visible in this image, including a giant multiringed structure within the dark region on the left. A sharp, linear ridge crosses the center of the disk, looking like a conical mountain that pokes up from Iapetus's limb on the right.

Then, through much of 2006, Cassini was moved to the midnight side of Saturn, which meant that it primarily had views of Iapetus' sub-Saturnian hemisphere: 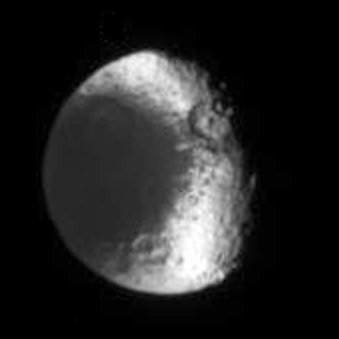 But now Cassini's orbit is being swung around again, so that it's now on the dusk side of Saturn, so that when it's out in Iapetus' neighborhood, it's the moon's trailing hemisphere that is sunlit. 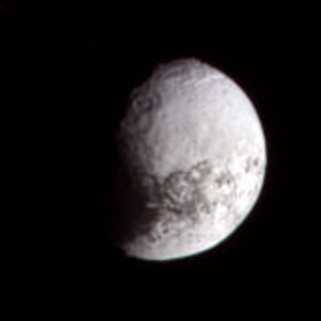 This view of Iapetus, taken by Cassini on April 19, 2007 from a distance of 2.3 million kilometers (1.4 million miles), is an RGB color composite of raw, unprocessed, uncalibrated images. It has been enlarged by a factor of two. The view shows the trailing or bright hemisphere of the moon. Near the terminator (day/night boundary), slanting dawn light brings out the topography of a concentric impact basin. The limb (edge of the disk) is noticeably lumpy, reflecting the moon's battered past.

This modification of Cassini's orbit will eventually permit the spacecraft to perform the one close flyby of Iapetus through the entire primary and extended mission, a long-awaited event that will take place in less than five months.

There's lots of information about the plans for this orbit's observations of Iapetus on the "Looking Ahead" page for Rev 43 at the CICLOPS website. These new features are being written by Jason Perry (with, he says, lots of editorial help from Carolyn Porco and Preston Dyches) and are really useful for figuring out what the imaging team has in mind when they take their pictures of the Saturn system.