According to a press release issued this morning by the National Oceanic and Atmospheric Administration -- parent agency of the National Weather Service -- the enormous solar flare that erupted from a sunspot called "region 930" on December 5 and 6 last year was accompanied by an intense radio burst that caused large numbers of Global Positioning System recivers to stop tracking the signal from the orbiting GPS satellites. The radio waves from the flare were broadcast as noise across a boad frequency range that overlapped the radio frequencies employed by GPS. This is the same solar flare that caused Mars Odyssey to enter safe mode.

It's possible -- in fact, likely -- that events like this one have happened in the past, but this is the biggest radio burst ever measured, and it happened during solar minimum, when sunspot activity is at its lowest. Who knows what could happen during solar maximum? GPS is increasingly penetrating the mass market. Once only used by the military, it's now being incorporated into cars and cellular phones, meaning that there must be tens of millions of regular users at least, most of whom probably have no idea that events 150 million kilometers away on the Sun can prevent them from being able to find where they are or where they want to go. Our society increasingly relies on space-based assets like GPS, which makes us increasingly vulnerable to our space environment. As with hurricanes, there's nothing we can do to prevent these solar storms from hitting us, but with enough warning we can protect our orbiting assets and we can prepare users for outages.

Still, the December 5-6 event raised a few key concerns. First of all, we as a society have to be aware that the space-based technology that we rely on for GPS and communications is vulnerable to space weather events. Secondly, when something like this happens, it doesn't just strike one region of Earth; this is dramatically unlike Earth weather disasters, where unaffected regions can come to the rescue of affected regions. When a solar flare hits, its effects are global and occur everywhere at the same time. Thirdly, the fact that this radio burst was the largest one ever detected means that our predictions for how often major events occur are probably incorrect. It's a lot like earthquakes and hurricanes: predictions for how often a region is likely to experience these disasters are based in large part on historical records. Our records don't go back very far. We can predict the future likelihood of small, frequent events fairly well, but the records don't support the accurate prediction of large, infrequent events.

There is a meeting going on in Washington, D.C. today and tomorrow to address these and other issues. (Here's the agenda, in PDF format.) The National Weather Service's Space Environment Center has a lot of information on current space weather conditions, and a subscription service for email space weather advisories. And Spaceweather.com also has space weather information, as well as some other content on near-Earth asteroids, comets, and other things of observational interest. 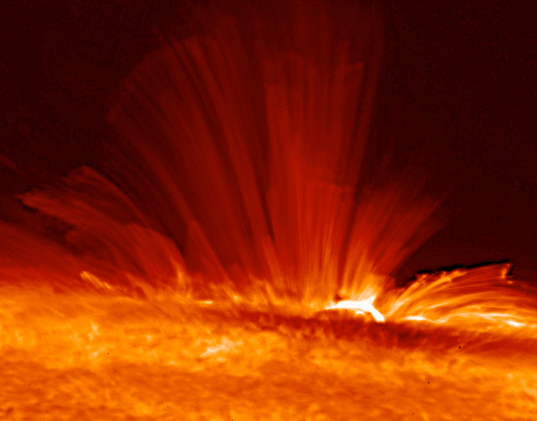 Hinode sees a sunspot from the side