Enceladus is a drag on Saturn's radio emissions

Just last week, I answered this question on my Q and A segment for Planetary Radio: "What does the length of a day mean for a rotating ball of gas like Jupiter?" (It was part of the Rosetta show with Gerhard Schwehm.) In my answer, I explained that scientists figure out the rotation rates of giant planets by listening to their radio emissions. The radio emissions come from charged particles interacting with the planet's magnetic field. I said that the magnetic field is generated deep in the interior of a planet, so as the whole planet rotates, so does the magnetic field, and consequently so do the radio emissions. So you can listen to the radio emissions to get the length of the day. As an example, I gave this clip of Saturn's kilometric radio emissions, recorded in 2004 by Cassini's Radio and Plasma Wave Science (RPWS) instrument. The clip can be found on RPWS principal investigator Don Gurnett's excellent "Space Audio" website.

So what should arrive in my inbox today but a press release from the Cassini RPWS and magnetometer teams saying, in part, "the little moon Enceladus is weighing down giant Saturn's magnetic field so much that the field is rotating slower than the planet. This phenomenon makes it nearly impossible to measure the length of the Saturn day using techniques that work at the other giant planets. 'No one could have predicted that the little moon Enceladus would have such an influence on the radio technique that has been used for years to determine the length of the Saturn day,' said Dr. Don Gurnett." 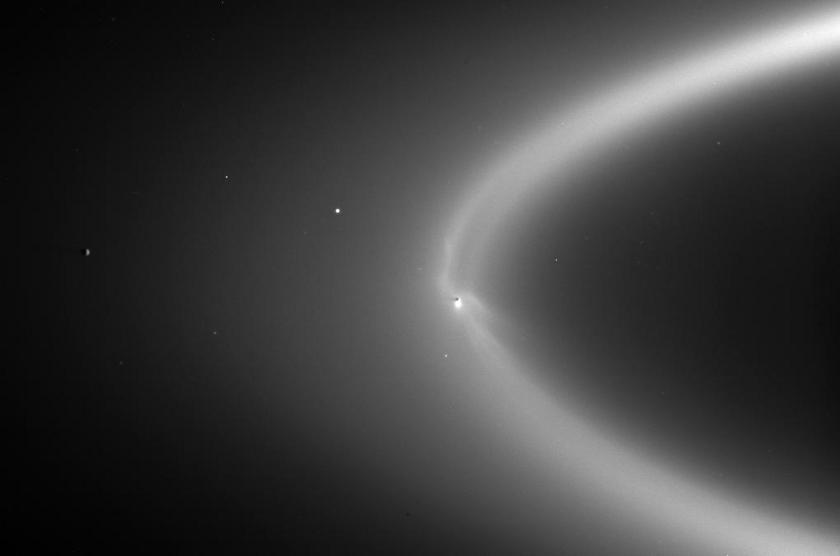 Enceladus and the E ring

With the Sun almost directly behind the view, the tiny moon Enceladus (slightly over 500 kilometers in diameter) is embedded in the E ring, which is created from the material spewed from Enceladus' south polar plumes. The view is down onto Enceladus' north; orbital motion is counterclockwise. Some of the complex structure around Enceladus in the E ring results from different orbital speeds of ejected particles: slower particles lag behind (above) Enceladus, and wind up on larger orbits; faster particles stream ahead (below) Enceladus and wind up on smaller orbits. Other structures may result from interactions with Saturn's magnetic field.

The press release is in reference to an article published online this week in the journal Science. I've read the article and I'm afraid I don't understand the physics well enough to explain the phenomenon in any more detail than it's described in the press release. "The neutral gas particles ejected from the geysers on Enceladus form a donut-like torus around Saturn. As these particles become electrically charged, they are captured by Saturn's magnetic field, forming a disk of ionized gas, or plasma, which surrounds the planet near the equator. The particles weigh down the magnetic field so much that the rate of rotation of the plasma disk slows down slightly. This slippage causes the radio period, controlled by the plasma disk rotation, to be longer than the planet's actual rotation period."

What I do understand is that this discovery, like so many major discoveries made by planetary missions, solves one major mystery at the same time that it uncovers several more to be solved. The discovery explains an intensely puzzling phenomenon about Saturn's pulsing magnetic field, namely that the radio rotation rate measured by Voyager was six minutes faster than the one measured by Cassini. This difference could not possibly have been caused by Saturn actually slowing in that time; a body the size of Saturn rotating as fast as it does has an unimaginable amount of angular momentum, and there would be no way to dissipate that much angular momentum in just a quarter of a century. Now that we know that the radio rotation rate lags behind Saturn's actual rotation rate, scientists can explore a wide range of hypotheses for how short-term changes in the Saturn system could result in changes in the radio rotation rate. For instance, it could be coupled to time-varying activity of Enceladus' geysers, or it could have some link to the different seasons sampled by Voyager and Cassini. There's one mystery for you.

But an even bigger mystery is: how long is one day on Saturn? That is a basic fact about Saturn's dynamics that is an important input into all kinds of models for what's going on inside and outside it: its magnetic field, its atmospheric dynamics, and so on. I'll bet that there are a lot of Saturn scientists who greeted this discovery with simultaneous feelings of excitement and dismay.

Scientists are creative, though. Sooner or later, someone will figure out a new way to get a handle on Saturn's day length. Mysteries and challenges like these are a large part of the fun of planetary science.