We know that Jupiter and Earth are two worlds with dynamic, cloud-filled skies. But it's easy to forget that Mars is another such world with cloudy weather and seasonally varying climate. This lovely image release from the CRISM instrument on Mars Reconnaissance Orbiter brings that point home. 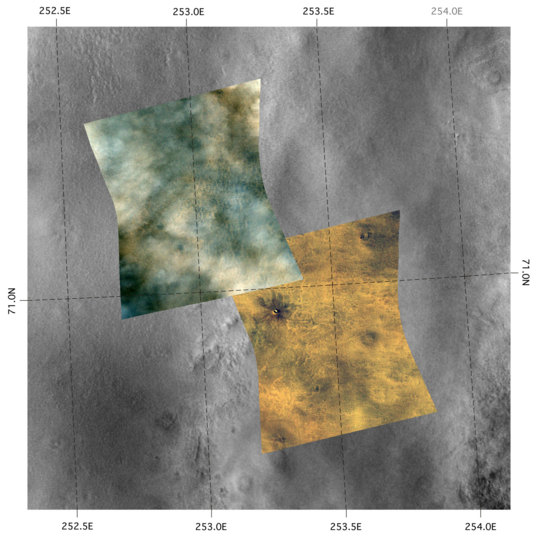 During the early part of its science mission, Mars Reconnaissance Orbiter frequently targeted Mars' far northern plains to capture data over the possible landing sites for the Phoenix lander, to be launched in 2007. Mars Reconnaissance Orbiter arrived as summer was waning and autumn weather arriving in the northern hemisphere. This map contains two CRISM images captured one month apart. The lower right image was acquired on November 29, 2006, and the upper left one on December 26. The earlier image is cloud-free, and surface features are easy to spot. But the later image is obscured by clouds and haze. As on Earth, clouds and haze on Mars are intermittent, occurring more frequently in some seasons than others; here in Mars' north, clouds and haze will become more and more frequent as the region descends into polar night. Under the cover of clouds and darkness, the region will soon be covered in water ice and carbon dioxide frost.

CRISM is an imaging spectrometer, like VIMS on Cassini or THEMIS on Mars Odyssey or Ralph on New Horizons. Imaging spectrometers generally achieve poorer spatial resolution than straight camera systems, which is to say that they usually can't see features as small as those visible to the cameras on the same spacecraft. This particular image has a resolution of about 20 meters per pixel; the HiRISE camera on the same spacecraft can do more than 70 times better.

But what imaging spectrometers lack in spatial resolution they make up for in spectral resolution. Many spacecraft cameras are black-and-white, meaning they're totally blind to color variations. Some spacecraft cameras are "multispectral," meaning that they can see some variations in color, usually (but not always) by slipping a color filter in front of the camera optics that only lets some wavelengths of light through to the camera. These cameras can see as many colors as they have filters, usually fewer than 10 different colors, though some have more. HiRISE sees up to three different colors; Cassini's narrow-angle camera has 23 different filters. Imaging spectrometers aren't multispectral, they're "hyperspectral" -- they can separate the light that comes in to their optics into dozens, even hundreds of different colors. CRISM is the most hyper of all hyperspectral imagers ever sent to Mars; it can see in 544 different colors!