Cassini just flew by Titan again on Saturday, and should have acquired a new swath of RADAR data. Just ahead of that, the RADAR team released the entire swath that they collected last July -- the one that crossed near the north pole and found lakes at last.

It's a huge, and beautiful, swath. Because of the geometry of the flyby, which had its closest approach near the north pole, the swath covers a very wide variety of terrains. It begins in the midlatitudes, at 20 degrees north, 142 west; curves northeast to roughly 80 degrees north; and back down to 13 degrees north, 347 west. This may be a bit hard to visualize. On Earth, this latitude and longitude range would begin in the Pacific northeast of Hawaii, cross western Canada, go up into the high Arctic north of most of the large islands, clip northeastern Greenland, and come down over central Europe and into north Africa. Here is a view of the full swath, cut down to 1.4 kilometers per pixel to give it a manageable file size:

This swath is about 6,600 kilometers (4,129 miles) long, subtending over 200 degrees of longitude and 55 degrees of latitude on Titan. It begins at 20 degrees north, 142 west, with a 75-kilometer-diameter circular feature that could be an impact crater or a volcano. From there it swings northward. At about 70 degrees north, the black spots of the putative methane lakes begin to appear. The center of the swath is near the north pole. The extreme right end is at 13 degrees north, 347 degrees west, and covers some of the now-familiar longitudinal sand dunes. The swath is shown here at a resolution of 32 pixels per degree (1.4 kilometers or 4,600 feet per pixel), a quarter of the full resolution at which the image was released.

Here's some things in the parts of the swath that hadn't yet been released that I thought were particularly interesting.

First, here's a lovely circular feature, about 75 kilometers in diameter. I want to just call this a flooded crater and be done with it, but Titan is a confusing place -- it could well be a cryovolcano or something else, so it's better just to be conservative and call it a "circular feature." It's at the far east end of the swath, so the RADAR resolution is actually pretty low. The RADAR illumination direction is from the top. I can't convince myself that I'm seeing very much topography here -- there's a hint of a shadow in the north side of the bright circular feature, but most of the variation in brightness would appear to have to do with the roughness of the surface rather than topography. The whole image is 180 kilometers square. 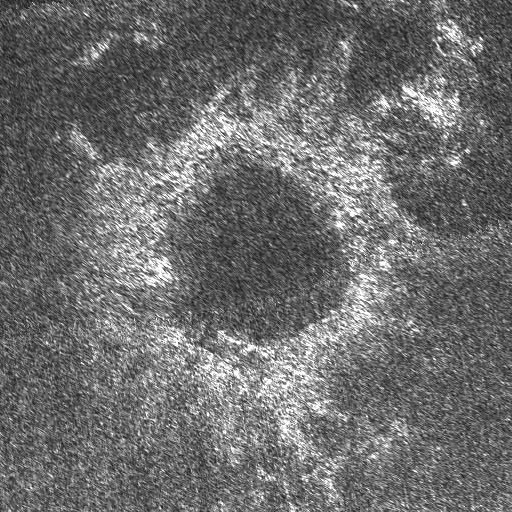 Moving toward the east, we pass over some jumbly-looking terrain that I have a hard time interpreting, and then we begin to approach the lakes region. The central part of the swath, with all the lakes, is described in the article I wrote on those lakes pictures when they were released last summer. Just to the west of all those lakes is this interesting piece of terrain (the image is about 140 by 110 kilometers in extent): 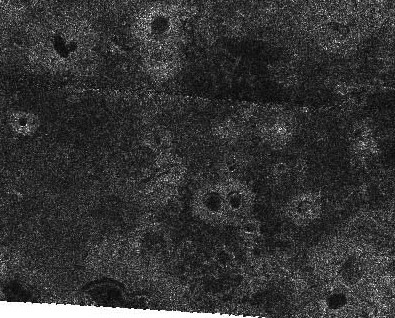 What I see here are a lot of little, markedly circular depressions with bright margins and dark floors. The smallest ones are very small, only 2 kilometers across or so; in fact, I get the sense that there are little circular depressions down to (and possibly below) the limit of what the RADAR instrument can resolve here. Even though these are also circular features with bright margins, I don't think these are impact craters. There are too many of them in one place, and they are all too similar in size. Instead, there must be some internal process generating what appear to be holes in the ground. Maybe they're little volcanic calderas (which would make planetary volcanologist Rosaly Lopes very happy), or perhaps they're sinkholes, places where something undermined the surface and caused the surface to collapse. My money's on calderas, because of the bright margins -- that could be stuff deposited around the rim of the caldera -- but there really isn't enough evidence to say for sure.

The next thing in the swath to the east is all those dark lakes. Continuing east, I see a few more holes in the ground that don't appear to be lakes, but they don't really look like calderas to me either. But what appears next is the weirdest thing in the swath. 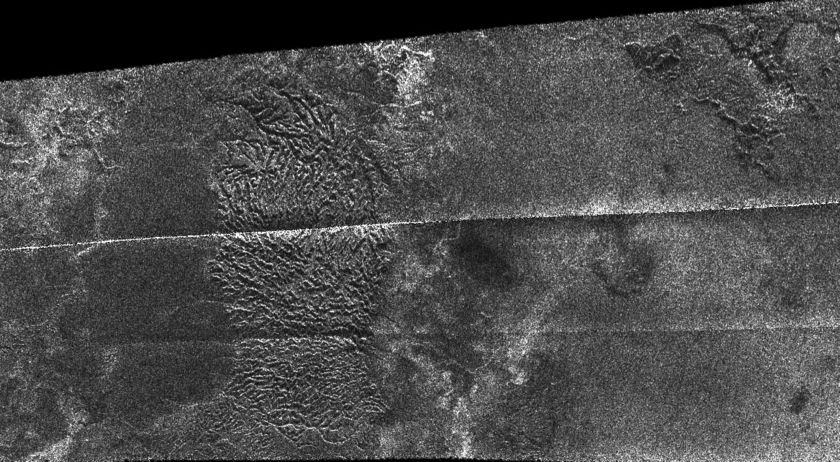 To the left of center in the image above is a large region that looks a little like a big thumbprint, full of little ridges and valleys. Some of those valleys organize themselves into drainage networks that seem to drain to the west. To the west of this peaky terrain is a remarkably smooth area that is dark, but not as dark as the lakes. The smooth area appears to have arcuate boundaries that would indicate that it flowed on to the peaky terrain, covering up its western margin, but some of the channels from the peaky terrain actually appear to cross into the smooth area, which turns that idea of crosscutting relations on its head. I scratched my head about this for a while and then fired an email off to some members of the RADAR team to ask them if they had any ideas. Chuck Wood kindly took the time to answer my email, writing: "I noticed that to the [immediate] right of this dissected terrain there is a roughly circular feature with a depressed light-hued floor crossed by a meandering stream. The west/left side is an arcuate rim and has beautifully radial drainage, looking like it dissected a very friable material. A wedge of apparently the same material defines the bottom right side of this feature. I guess that this structure is an eroded crater, possibly volcanic. In some ways it looks like the dark smooth plain to the left covers the dissected terrain, but channels extend from the terrain onto the dark plain." In other words, this dissected stuff could be a deposit of some easily-erodible material on the flank of a possibly volcanic structure to the immediate east.

Chuck also opined that this structure, in the far east end of the swath, could be another crater or volcano similar to the one from the west end of the swath. It's slightly larger, about 100 kilometers across. 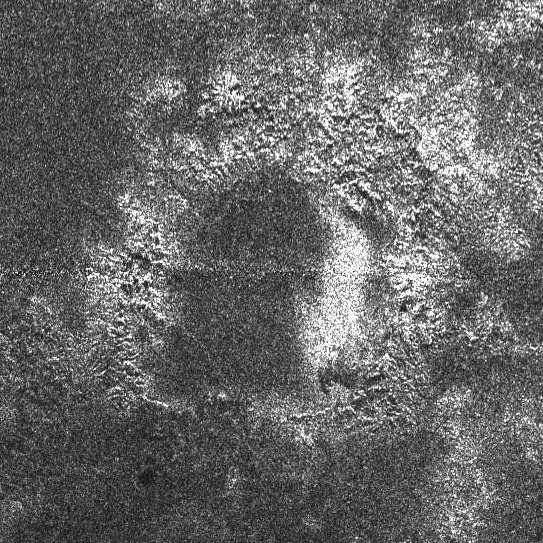 All in all, a really fun swath to look at, and I want to send a big "thank you!" to the RADAR team for releasing the whole shebang long before they are required to provide the data to the public via the Planetary Data System.

I went ahead and updated my Cassini RADAR Images of Titan page with this swath, as well as the full T8 swath, which was released to the Planetary Data System last fall. That's another good one -- it has a huge region of very straight mountain ranges, and another huge field of sand dunes, and covers the Huygens landing site. Hopefully we'll see some new bits of RADAR data from Saturday's flyby soon!

To wrap up, here is the whole T16 swath at its full resolution of 350 meters per pixel, split into five chunks of around 1 or 2 Megabytes apiece. Enjoy your walk across Titan!