New Horizons' Jupiter encounter is officially underway! The mission announced today that "The spacecraft began collecting data on the Jovian system this week, starting with black-and-white images of the giant planet and an infrared look at the icy moon Callisto on Jan. 8." The images aren't yet up on the site. New Horizonsis designed to be able to store on board a fairly massive amount of data for later, rather slow playback -- a design that makes sense when you consider it'll be spending nine years getting to Pluto and doesn't want to waste any precious Pluto encounter time playing back data that it will (hopefully) have months to years to play back fully after the encounter is over.

So until that playback begins, we'll have to satisfy ourselves with New Horizons' first Jupiter image, taken four months ago, as a promise of what's to come. I'll post updates as I find them! 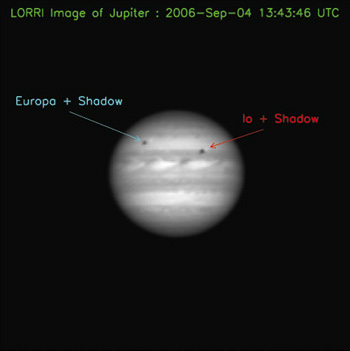 This image was taken by New Horizons' LORRI instrument on September 4, 2006, from a distance of 291 million kilometers (181 million miles).

This announcement also serves as a reminder that Rosetta is approaching for its Mars flyby. Rosetta flies by Mars the day before New Horizons flies by Jupiter. However, it appears that the Rosetta team is planning a rather shorter campaign at Mars than the New Horizons team is at Jupiter. This, too makes sense -- after all, there are a great many spacecraft at Mars, while there are none at Jupiter. Rosetta can mostly confine its Mars activities to ones that benefit the Rosetta mission directly, such as taking data that can be used to calibrate its instruments (Mars, being a very well understood target, provides a useful space-based standard). New Horizons, on the other hand, has its schedule packed with as much science as a time-strapped team could manage to plan for without endangering the mission. In fact, this month, rather than looking at Mars, Rosetta will be taking a distant look at the asteroid Lutetia instead. (Lutetia is one of Rosetta's planned asteroids targets, so this campaign, however distant, will provide a useful little chunk of data for the Rosetta team to chew on in advance of the encounter.)

Want to see how far Rosetta is from Lutetia? Check out the handy orbit viewer applet at NASA's Near Earth Object program. (Rosetta is not shown on the viewer, but it's currently pretty close to Mars.)