The first peer-reviewed article on Titan's lakes comes out in tomorrow's issue of the journal Nature. In "The lakes of Titan," Ellen Stofan and a host of coauthors detail what they state is "definitive evidence for the presence of lakes on the surface of Titan, obtained during the Cassini Radar flyby of Titan on 22 July 2006 (T16)."

To review, Stofan et al. discuss why people have long been looking for lakes on Titan. Liquid methane is thermodynamically stable at the pressures and temperatures prevailing everywhere on Titan's surface, just as liquid water is stable in most places on Earth. However, whether or not methane will be present also depends upon the relative humidity of methane in the atmosphere. Just as rain puddles evaporate on Earth when humid air is replaced by drier air, so, too, does methane evaporate into relatively dry air on Titan. In fact, the relative humidity of methane is less than 100% in most places on Titan except at high latitudes (which is to say, near the poles). As a result, Cassini found no evidence for currently extant standing bodies of liquid methane across much of Titan, until it looked close to the poles. Stofan wrote, "lakes will be stable from the poles down to a latitude determined by the abundance of methane in the surface-atmosphere system and by the possible intersection of such surface methane fluids with putative subterranean ‘methanifers', analogous to terrestrial aquifers."

Additionally, Titanian meteorology should result in the "preferential deposition of ethane in polar regions." Once deposited, ethane -- unlike methane -- would be slow to evaporate, so "would form a permanent component to lakes." The presence of ethane (as well as dissolved nitrogen) would depress the freezing point of the mostly methane lakes, allowing them to stay liquid even under very cold polar winter conditions.

So here is what the Cassini RADAR instrument saw when it flew by Titan's polar north:

Cassini's "T16" flyby on July 22, 2006 took it up to high latitudes near the north pole. RADAR images across the region contain numerous very dark splotches with sharp-edged boundaries, which may be the long-sought methane or ethane lakes on the surface of Titan. This image is centered near 80 degrees north, 92 west and measures about 420 kilometers by 150 kilometers (260 miles by 93 miles).

Sure, these look like lakes; but how exactly have Stofan et al. made their case to skeptical reviewers? Throughout the article they are careful to describe the dark spots as "radar-dark patches," not "lakes" -- this paper is, after all, about making the case that these might be lakes; the fact can't be accepted as a given.

First, they describe what they see when they look at the pictures: "more than 75 radar-dark patches, from 3 kilometers to more than 70 kilometers across." These radar-dark patches are some of the darkest stuff on Titan, much darker than the "cat scratch" sand dune features that form the darkest material in radar scenes elsewhere on Titan. The strength of a radar signal is measured in decibels, the same units you use for sound. The lakes, they say, are so dark that they "appear at the noise floor of the data (about -25 decibels);" for the darkest patch observed, "the normalized radar cross-section value…could be zero, because the measured signal is at the system noise level." The sand dunes, for comparison, are at -13 dB. Zero backscatter could indicate that the material is glassy smooth -- which liquids tend to be -- but there are other possibilities for non-liquid materials that could produce zero backscatter. So although the darkness of the spots is strongly suggestive, it can't be the only line of evidence.

Another line of evidence is the "brightness temperature," which can also be measured by the Cassini RADAR instrument, though at much lower resolution than the images it produces, about 6 kilometers. A few of the lakes were big enough to be visible, and they do have a measurable temperature contrast to the surrounding terrain consistent with their being liquid methane patches on top of ice. 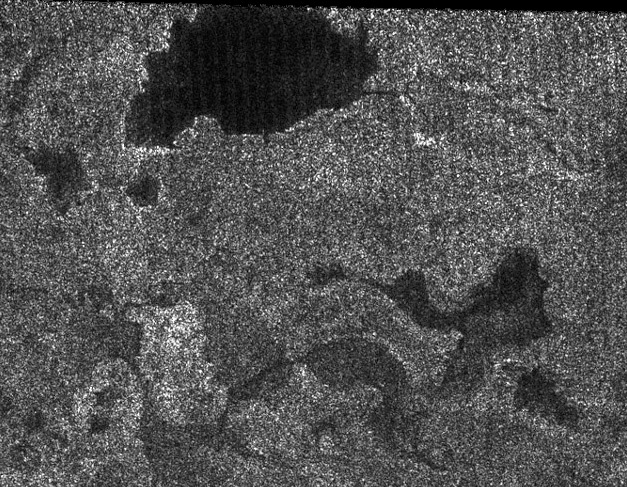 In this segment of the July 22, 2006 RADAR swath on Titan, very dark features are possible lakes; some, less dark features could be lakebeds that are now dried up. The darkest lake-like feature near the top of this image appears to have a thin drainage channel emptying into it from the east. It may even be possible that this channel connects the lake feature to one of the possible dried-up features to its southeast. However, the channel disappears into the background noise of the RADAR data, so evidence that the two features are connected is not conclusive.

So that's the evidence from the radar properties. Stofan et al then go on to talk about the geomorphological properties. They note that "At several of the dark patches, radar-dark sinuous features lead into the dark patch" -- in other words, there are things that look like streams leading into or out of the things that look like lakes. However, they also note that there aren't very many of these streams, so, if they are streams, they probably can't be the only source of dark material that fills in the patches. Interestingly, there appear to be two distinct types of radar-dark patches. Fifteen of the 75 patches appear to be in steep-sided topographic depressions, suggestive of lakes lying within impact basins or sinkholes. The authors state that the "nested nature and limited size range of the depressions make an impact origin unlikely," so the depressions more likely have a volcanic origin, or perhaps they really are sinkholes (places where ground-methane has dissolved underground materials, allowing the roof to collapse). Methane shouldn't be able to dissolve ice but if Titan's ice contains lots of organic gunk, perhaps methane could dissolve enough of that to make the roof collapse into a sinkhole.

Only two hypotheses are consistent with the radar properties and morphology described here: either they're lakes, or they're depressions filled in by windblown gunk with very low density that is also darker than anything seen anywhere else on Titan. But there aren't obvious aeolian features here -- no sand dunes -- so the authors consider the dry hypothesis unlikely and conclude that the radar-dark patches really are lakes.

The rest of the paper goes on to describe a bunch of curious and suggestive features about individual lakes. For instance, some get brighter toward their edges -- perhaps we're seeing radar reflections from the lake bottom where the lake is shallower (less than a few tens of meters deep), or possibly some of them are actually waves. They probably aren't icebergs -- there's nothing around that's likely to float in methane.

These lakes, if lakes they are, almost certainly respond in some way to the changing of the seasons on Titan. Let's hope that Cassini survives long enough to see spring arrive in the Saturn system -- the equinox is on August 11, 2009, a little more than a year past the end of the primary mission. Titan's surface is fascinating and complex, and if we watch it long enough, we might even see it change with time.

This article was the cover story for this issue of Nature. Here's the cover image: 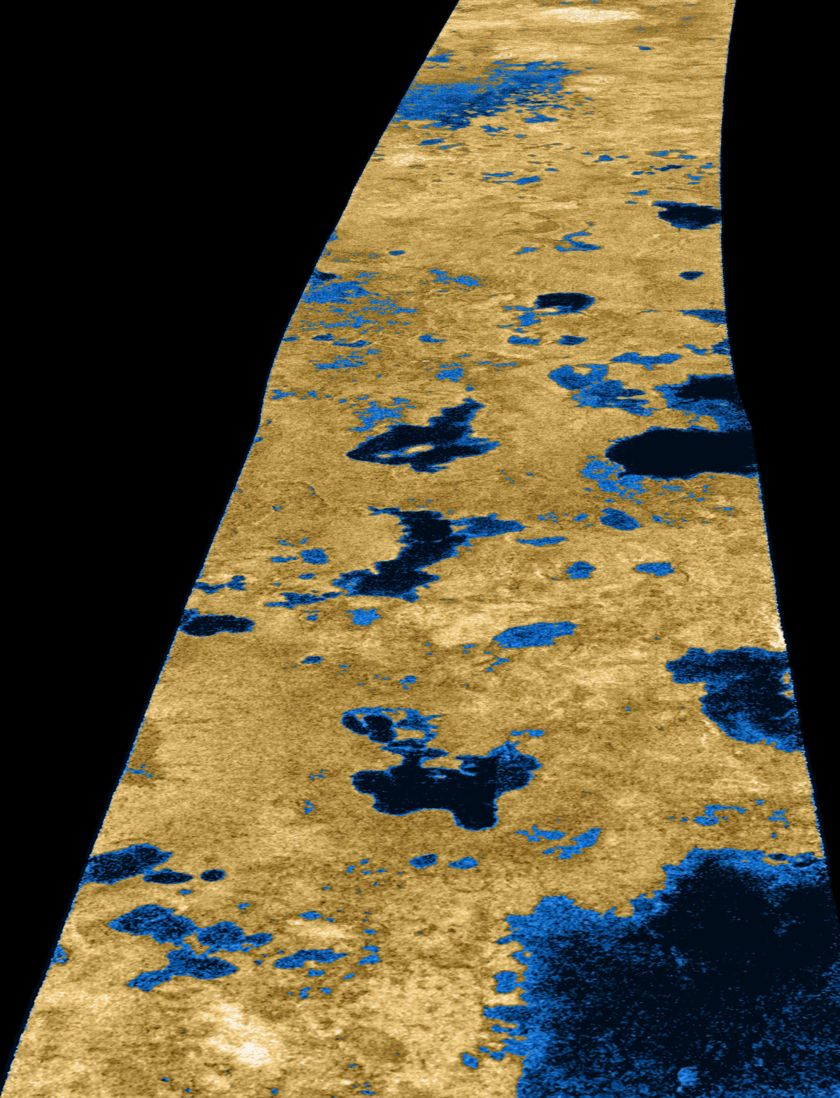 This version of the radar image from Cassini's July 22, 2006 ("T16") flyby of Titan has been colorized to emphasize the probable lake features discovered within it. Colors indicate the relative strength of the returned radar signal: blues are weaker signals (and are thus "radar-dark"), and tans are stronger signals. The probable lakes are the radar-darkest materials seen on Titan. The view has also been foreshortened to simulate an oblique view of the region, seen from a point to its west.

I have mixed feelings about colorizing images in this fashion. The colors are not what you'd see if you were standing there; it's just the choice of a color map that they made. They could easily as well have chosen to use a color map that made the radar-darkest materials bright red and the radar-brightest materials blue. Obviously they chose to make the radar-dark stuff blue in order to suggest that they are filled with liquid. "Blue" pretty much always means "lakes" or "oceans" to the eyes of most people. Now, since their paper is making the case that these things really are lakes, they're justified in this color choice. One place where I really dislike this choice of blue = low color table is on topographic maps of places other than Earth. Take this topographic map of Venus' north pole, for instance: 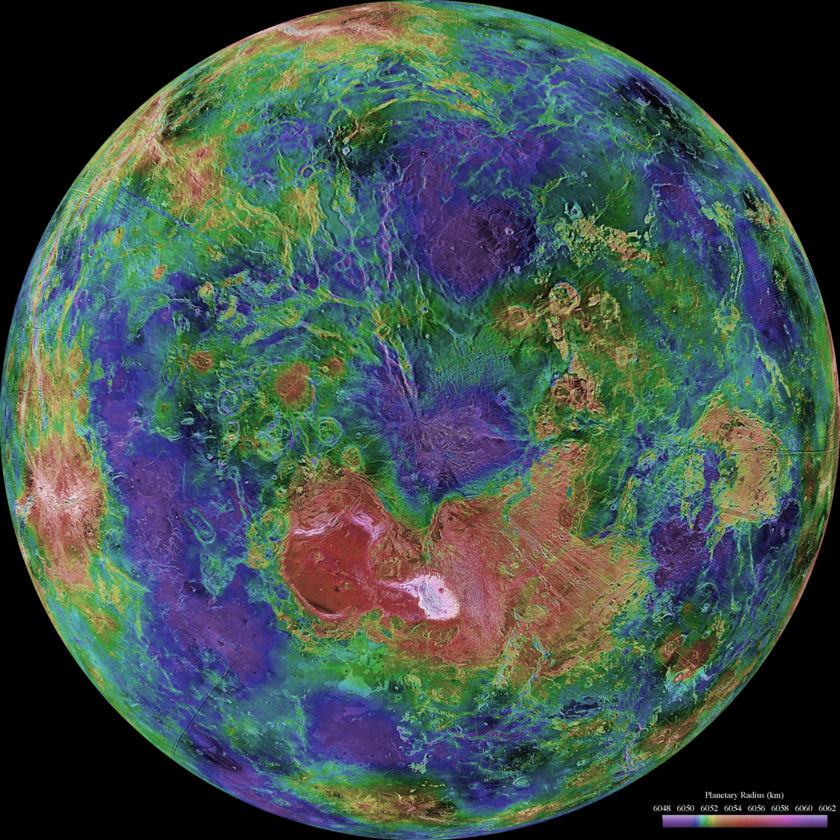 Magellan RADAR images are combined with topographic information to create this view of Venus' surface centered on the north pole. Resolution reduced by half from original. Created in 1994.

Here, blues and purples represent low elevations. My mind wants to call these ocean basins, and the red and yellow stuff continents. But not only doesn't Venus have oceans, it doesn't have basins in the sense that Earth does. Earth's surface can be split between continents, which stand high, and ocean basins, which stand low; Venus's surface varies continuously between high stuff and low stuff, without this contrast, so the ocean and land colors on this map are really misleading. Sorry for the rant -- that's just a personal pet peeve.