I'm now back in California and after a restful weekend am going to try and wrap up all my notes from LPSC today. But first, I should mention that today's Planetary Radio features Scott Sandford, of Stardust, talking about what he presented at the conference, and me, talking about what I saw. I found that it's awfully hard to say very much in only six minutes!

What I've got left to talk about is: an interesting astrobiology talk by Brett Gladman from Thursday; Tuesday's and Thursday's poster sessions; and Friday morning's Hayabusa presentations. I'll begin here with the poster sessions.

Below is a snapshot I took of one of the two poster session rooms before I descended into the fray. The way the poster session works is that the conference has these bulletin boards set up in the indoor tennis court and gymnasium of the fitness center attached to the conference hotel. In the morning of the same day that the poster session is to be held, poster presenters can walk over and mount their posters, which have to fit within a specified space. Making a poster used to be a difficult and complicated task before the advent of large-format printers, but nowadays people in well-funded departments can just make a poster in Illustrator or Pagemaker and print it off in one colorful sheet, with the result that you can usually tell who on your airplane is also going to attend the conference in the airport because they're all carrying four-foot-long poster tubes. Conference attendees can go over to the poster displays any time during the day to read over the posters and make note of which ones they want to discuss with their presenters, although I never have time during the day to go over first.

Then, in the evening after all the talk presentations are done, there are two hours in which the whole conference gathers to mill around and discuss what's being presented (or anything else that's on their minds; the posters are a great place to look for old friends you haven't run into yet in the talk sessions). Having a poster session to go to after a full day of talks can be a little daunting and it's tempting to skip it, which is probably why they always serve free beer. They often have a couple of kegs of better beer and more of cheaper beer, which acts as an incentive to show up early, but I don't know if that's actually the conference organizers' intent! 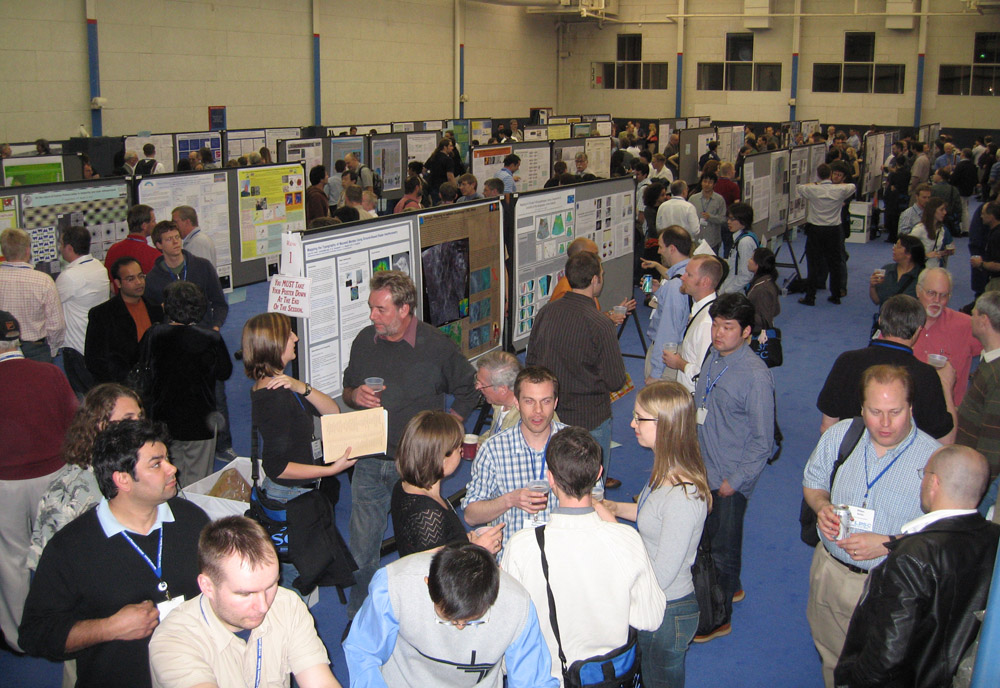 Scientists gathered in an indoor tennis court at the South Shore Harbour Resort and Conference Center, League City, Texas, for a poster session on March 14, 2006.
I only had an hour and a half at the poster session, so I ran around as quickly as I could, jotting down notes on interesting posters. Here's what I took note of. All of the talk titles link to the abstracts on the conference website, which are in PDF format.

An Extended Field of Crater Structures in Egypt, by Philippe Paillou et al. This poster had several pretty images of the crater field in southwestern Egypt, in which Farouk El-Baz just discovered the largest crater yet found in the Sahara. Desert environments (including both hot deserts like the Sahara and cooler ones like the Altiplano and the interior of Antarctica) are great for doing research on Earth impact cratering, because quite often they have been deserts for millions of years. With a slow rate of weathering and erosion, they preserve better the record of meteorite impacts onto Earth than most other environments.

Landing Massive Payloads, Accurately, on Mars: A 25-Year Roadmap, by Jay Bergstralh et al. This poster made a couple of interesting points about the past and future of landed Mars exploration. "All five spacecraft that have landed successfully on Mars (Viking 1 and 2, Mars Pathfinder, MER-A and -B) employed the entry, descent, and landing (EDL) system developed more than 30 years ago for Viking," ran his poster's thesis. The system includes: an unguided, hypersonic treajectory through the atmosphere; a parachute that opens between Mach 1 and Mach 2; a landed mass under 600 kilograms; a landing in low slope, low elevation terrain, 1 kilometer below the mean; and they all landed within a landing ellipses with dimensions of 10s by 100s of kilometers. They differed only in the final details of the landing. But the future of Mars exploration, including sample return, will require different capabilities: touchdown masses greater than 1,000 kilograms, landings at higher elevations and on higher slopes, and much smaller landing ellipses with dimensions only 100s to 1000s of meters in size. They conclude that NASA must invest in the development of advanced (post-Viking) EDL technologies in order to enable future Mars exploration. The other conclusion was that landings at higher elevations and with smaller ellipses will require a much better and more detailed characterization of Mars' atmosphere.

Long Life and Light Gas Balloons with Active Isolation Envelope for Martian Applications, by Nehéz et al: who knew that the Hungarians were developing Mars balloons? I'm sure some of you did, but I stopped, and more than one other scientist walking by stopped and said "huh!" when they saw this poster.

Distribution of Icy Particles Across Enceladus' Surface, by Ralf Jaumann et al. Jaumann couldn't be there, so fellow DLR scientist Roland Wagner (who presented on Dione on Wednesday) was presenting the poster for him. The poster presented results at Enceladus from spectral mapping being performed using the VIMS instrument. It showed how ratio images could effectively map different ice particle sizes on Enceladus. They used ratios of the surface reflectance at 1.04 and 1.25 microns and at 1.5 and 2.0 microns to map particle size distributions. They found that the particle size correlated quite nicely with the mapped surface units on Enceladus. The youngest features (the tiger stripes) had the largest sizes, with ice crystals of 20 to 50 microns or even larger -- some of those might be large enough to see as individual grains with the naked eye. The ridged plains units on Enceladus, which have experienced some tectonic events but which also show craters (unlike the tiger stripes), have smaller grain sizes of 10 to 20 microns. The oldest units, which are heavily cratered, have the smallest particle sizes, under 10 microns. There are pretty maps in the abstract, which were shown larger on the poster.

Topographic Features of Ithaca Chasma, Tethys, by Giese et al. Roland Wagner was presenting this one too. As often as I look at Saturn's icy moons, it can still be a little hard to tell them apart, especially Dione, Tethys, and Rhea. But if Tethys is turned so that you can see the long Ithaca Chasma crawling around two giant impact basins, it's obvious which moon it is. They mapped Ithaca Chasma and determined that it was an extensional feature, representing crustal extension of 8 to 10 percent across its width. This is too large, he said, for it to have resulted solely from the extensional forces that would have acted in Tethys' shell as a molten interior froze and expanded, as water (but few other common solar system constituents) will do. Furthermore, the gigantic Odysseus impact basin, though clearly intimately associated with Ithaca Chasma, is older than the chasm and cannot account for its formation. There's a second really big basin in the images of Tethys, more subdued than Odysseus, at the southern part of Ithaca Chasma. I asked him if they had a name for it yet, and he said that the imaging team has been working on getting place name features for many of the new features revealed by Cassini on the icy moons, so hopefully we'll have names for these things soon.

The Recovery of the Stardust Sample Return Capsule, by Scott Sandford et al. This poster recounted the dramatic recovery of the sample capsule, with special attention to all the work they had to do to prevent Earthly organics from entering the precious samples. (For more on this, read back to the two entries I filed from Monday's Stardust talk session -- first half and second half, or listen to Scott Sandford talk in this week's Planetary Radio.) I congratulated Sandford and the team on having a sample return that seemed to exceed their expectations. He reflected on that and remarked that they had been so busy and had so much to think about that he only found out what he had expected about the sample return after something happened and he was surprised -- or not. I guess their schedule didn't allow much time for reflection before the fact.

Are Martian Dunes Migrating? A Planet-Wide Search for Dune Movement, by Kevin Williams. This poster showed the results of a study that searched for change on Mars visible from orbit, and found no evidence at all for any migration of sand dunes. Obviously other changes are happening on the surface of Mars; you can see dust devil tracks form and fade, and dust is certainly moving around or it wouldn't be a problem for the rovers. But the dust motions have not created any changes in dune fields that Williams could see from orbit.

So those are my notes from Tuesday's poster session. By the time Thursday evening rolled around, I was getting exhausted enough that I just couldn't seem to stop and read posters -- I just walked on by them all. Until I got to the section on Hayabusa. Cool stuff. I'm going to roll my Hayabusa poster session notes in with my notes from Friday morning's Hayabusa talks, which I'll write up next.