A couple of weeks ago there were press releases coming out of the American Geophysical Union meeting about the discovery of a "massive mountain range" on Titan. On the face of it, this isn't all that exciting an announcement. After all, there are plenty of mountains on other planets that are pretty easy to find -- think about Mars' volcanoes, Venus' tesserae, and various kinds of ridges and hills all over the place on all the other solid surfaces in the solar system.

But mountains on Titan are really, really hard to see. Here is the picture that they were talking about, which was taken by the Visual and Infrared Mapping Spectrometer (VIMS) during the T20 flyby on October 25. 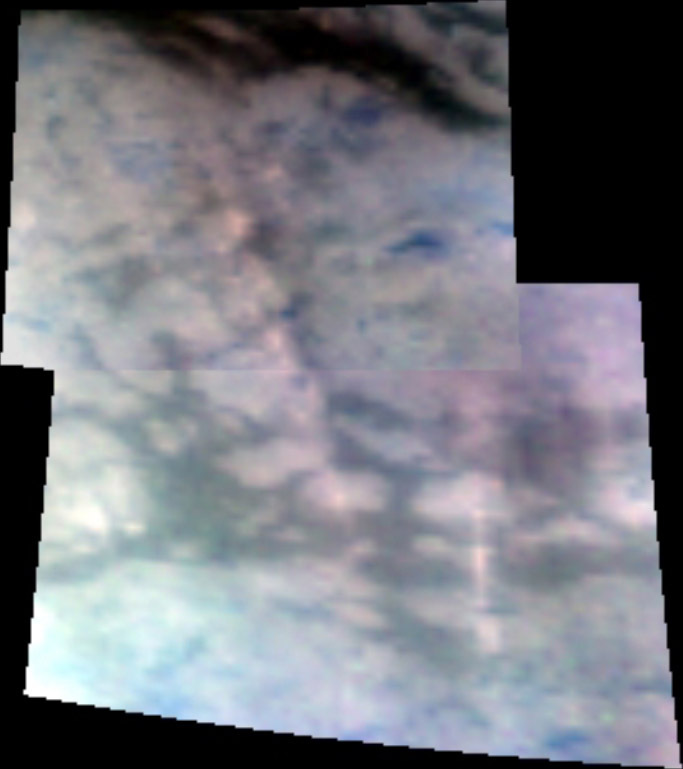 A mountain range on Titan

The VIMS instrument on Cassini captured this view of a mountain range on Titan just south of the equator on October 25, 2006. The mountain range runs from northwest to southeast across the image and is made visible by the subtle effects of topographic shading on this cloudy world. The color image is composed of infrared views captured through three methane "windows" at 1.3 microns (blue), 2 microns (green), and 5 microns (red).

Where is the massive mountain range? The problem is that Titan's atmosphere is so thick and murky that what little sunlight manages to reach the surface and come back out to our cameras has mostly been repeatedly scattered. That scattering robs Titan of its shadows. Mountains and other topographic features are easy to spot elsewhere because the Sun usually lights up one side of a mountain, while shadows are cast on the opposite side. When you look at a photograph of most planets, most of the range of brightness and darkness you can see is in fact the result of topographic shading. Take this image of Enceladus, for example: you know that you're seeing ridges because of the patterns of light and shadow. 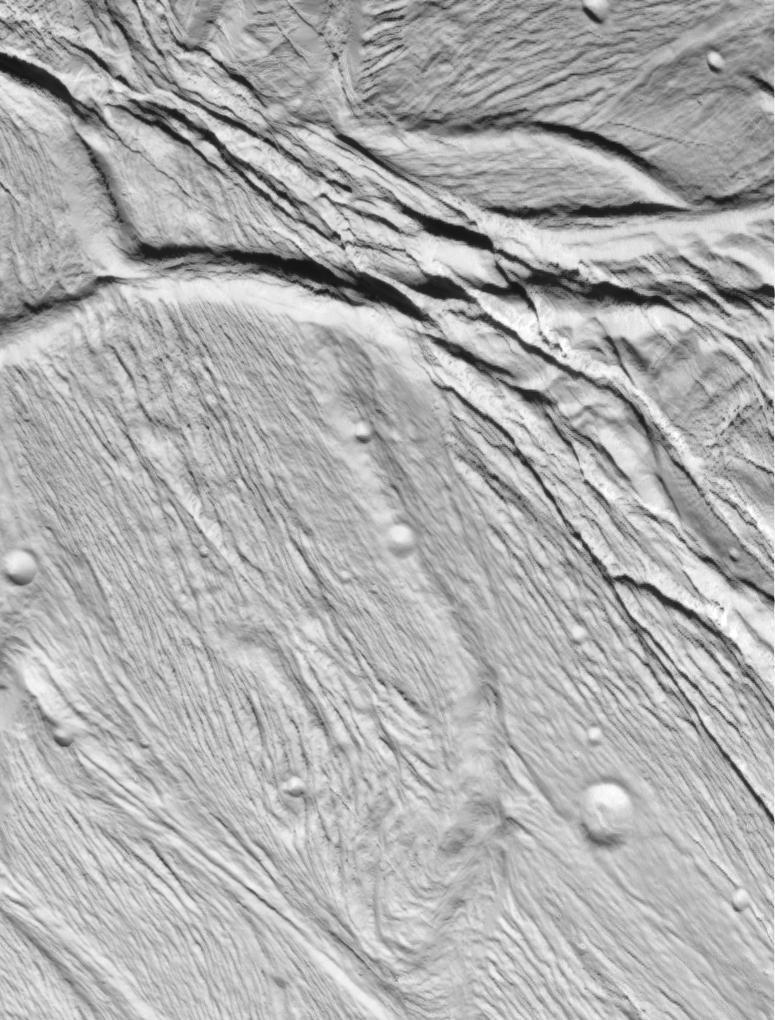 Cassini was a mere 10,750 kilometers (6,680 miles) from Enceladus when it snapped this photo of prominent ridges across Enceladus' surface. The paucity of craters suggests a youthful age for this terrain. Source

In that VIMS image of Titan, however, the most prominent brightness and darkness differences have nothing to do with topography; they're painted on the surface. To find the mountains, you have to look for a more subtle striping in the northwest-southeast direction. That striping is, in fact, topographic shading, visible only at relatively long infrared wavelengths of 2 and 5 microns (longer wavelength than the main cameras can see). It's actually quite an achievement that VIMS managed to see these features.

Achievement or not, the mountains are a little hard to make out, so I sent off an email to VIMS team member Larry Soderblom to asked him how confident they were in their interpretation. He replied:

I am very sure that we're seeing topography in the form of the NNW-SSE mountain belts. We see them at different wavelengths in all three of the clearest methane windows (1.3, 1.6, 2.0 microns) and the contrast between the brighter and darker sides of the chains varies among the three spectral channels as we'd expect. I believe that the patterns you are describing [the most prominent bright and dark markings] drape over the mountain ranges and are probably due to thin coatings of different hydrocarbon materials as well as the removal of the same. There's a general consensus among the Titan scientists that these are mountain ranges. Now that we are pretty sure they're there in Release 2 we can also pick out the same ones and several other parallel sets in the lower resolution images from [flyby] T17 in Release 1. It appears also that their contrast increases toward the terminator as would be expected.

The mountains are described as being about 150 kilometers long, 30 kilometers wide, and about 1.5 kilometers high. These aren't tall as mountains go, but they're taller than the Europan ridges (which tend to be a few hundred meters tall), so they're fairly significant in size. Kudos to the VIMS team for finding them. The fact that it's hard to find mountains is just another example of why studying Titan is hard.