Cassini's T7 flyby of Titan occurred on September 7, 2005. They've now released the full swath of RADAR image data to the Planetary Data System; here it is for your enjoyment. (Thanks to Jason Perry for pulling it out of the PDS and saving me some work!) This view is at about 1,400 meters per pixel, one-eighth the full resolution. (Half resolution details are below.)

Cassini acquired about half of the planned RADAR swath on the September 7, 2005 flyby, covering a region from 30 to about 65 degrees south and from 30 through 0 to about 345 degrees west. It contains lots of apparently fluvial features, both incised channels and fanned delta-like structures. At the extreme right of the swath (nearest the summer pole), the mottled terrain suddenly gives way to a very low-backscatter plain.

There are lots of fascinating channel features in this image. What's most interesting is how the character of the channels changes as you go across the image from north (left) to south (right). The left end of the image begins with some rather ho-hum looking mottled plains; then, all of a sudden, just left of center, hundreds of little channels start leaping out of the mottled texture. Some of them look for all the world exactly like incised and meandering canyons on Earth. Others are in parallel sets that seem completely foreign to me; I don't understand what's going on there at all. Each of the detail pictures below is shown at the same scale, 350 meters per pixel, about 90 kilometers square. 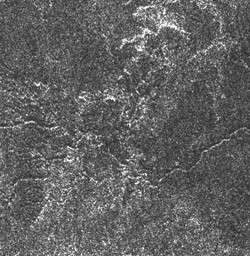 A detail from the September 7, 2005 "T7" RADAR swath on Titan shows incised channels with a classically fluvial branching and sinuous shape.

As you keep going to the right, you find another different kind of fluvial-looking feature entirely. The general sense of direction of flow is from left to right across the image; branches merge to make single channels going from left to right. But then the rules change, and you suddenly see these overlapping sort of fan-like features. Unlike the channels in the pictures above, they don't have obvious up-and-down topography. (This isn't to say they don't have topography; it just might be too shallow to show up as the bright-and-dark doublets that mark those other channels). Instead, we see them because they appear to have different "backscatter" properties from what they are deposited on (or incised into). Finally, at the very end, you get to what the RADAR team described as a possible shoreline -- mottled terrain with incised channels suddenly gives way to very smooth, darker terrain. There are still subtle features visible in the smooth, dark terrain -- I don't think anyone's arguing that we're actually looking at liquid there. But it could be a dry lakebed like the putative one that Huygens landed in. 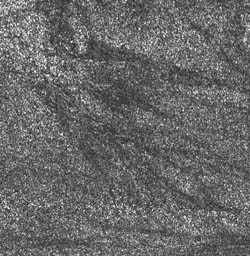 I've posted the swath at medium and high resolutions on the Cassini RADAR Images of Titan page.

Also, while I'm talking about RADAR, I thought I'd mention that Cassini will shortly be flying by Titan again, for the T16 flyby, and should be acquiring a much-anticipated RADAR swath across the high northern latitudes. This is much-anticipated because the highest-resolution part of the swath will cover areas that are currently in permanent winter darkness (or twilight) and thus not visible to Cassini's optical remote sensing instruments; it'll be our first look at these northern polar regions. It will be very interesting to compare RADAR images from the T16 flyby to the images I included here from T7 -- do Titan's poles look the same or different? Titan's difficult to predict. The flyby will take place on July 22 at 00:25 UTC.

Apart from the RADAR swath, this flyby will mark another key event: the flyby to the north of Titan will at last tip the orbit back out of the ring plane, so we'll get the first good look at the rings since the T7 flyby. (T7 was the one that put Cassini into the ring plane. It's no accident that polar views on Titan give you major changes in Cassini's orbit inclination.) T16 will tip Cassini into a 15-degree inclination. Over the end of the summer and beginning of fall, we'll see that inclination ratcheted up with nearly every Titan flyby to as high as 55 degrees by late October. The views down on the ring system should be fantastic! Will we see the spokes again or not? Stay tuned. A couple of the scheduled guest bloggers, Rosaly Lopes and David Seal, are particularly well positioned to comment on what's going on with Cassini during that time. Check out the Cassini Tour Page for more details about the orbit changes and coming flybys.