New Horizons is spending the summer traversing the asteroid belt. I haven't written a lot about New Horizons lately because the mission has been going so uneventfully well. But now I've got something to write about: data!!

Popular misconception holds that the asteroid belt is packed with rocks colliding in to each other, but it's actually very empty; spacecraft after spacecraft has traveled through it without running in to so much as a pebble. (The list of trans-asteroid-belt-travelers includes the Pioneers, Voyagers, Galileo, and Cassini-Huygens, and now, New Horizons.) So if you want to look at any asteroids while you pass through the belt, you have to make specific effort to target them. It was decided that New Horizons' fuel should not be wasted on trying to get any close asteroid approaches, and rightfully so; asteroid approaches have been done a few times before, but Kuiper belt object approaches never, so New Horizons' fuel is being saved for that part of the mission. That meant that a good view of an asteroid for New Horizons was not particularly likely.

However, as principal investigator Alan Stern mentions in his "P.I. Perspective" update from a couple of weeks ago, celestial mechanics delivered a little gift to the mission. In May, the team figured out that the spacecraft would just happen to pass within 104,000 kilometers of a tiny asteroid called 2002 JF56 at 04:05 UTC on June 13. This isn't a particularly close approach to a 2,500-meter object, especially because New Horizons can't yet take the lens cap off its highest-resolution camera yet. However, it's more than close enough for the asteroid to show up as a pixel or two on the lower-resolution cameras. Because of that, it's a terrific opportunity for the team to test out the spacecraft in a high-speed encounter, in advance of its encounter with Jupiter in January (not to mention its higher-speed encounter with Pluto and Charon).

Apparently it was a successful test. Here's the first images released by the New Horizons team: 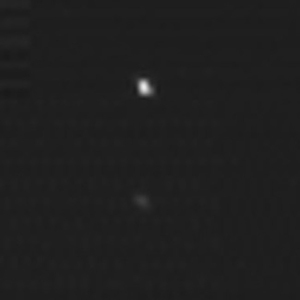 New Horizons pointed its instruments at the tiny asteroid 2002 JF56 on June 11, 12, and 13, 2006. This image contains two photos, one taken on June 11 from 3.36 million kilometers (2.1 million miles) away (bottom), and one taken on June 12 from 1.34 million kilometers (833,000 miles) away (top). Both images have been enlarged. The asteroid is so small, at 2,500 meters across, that New Horizons' cameras cannot resolve it at this distance. The images were taken in order to test the spacecraft's ability to track an object that was moving quickly with respect to the spacecraft.

According to the story they posted with this image, these are just the first representatives of a lot of data that will be coming back over the coming week or so. "About an hour before closest approach to the asteroid...Ralph began scanning it to obtain color images and infrared spectra. Those data must also be compressed before they're sent back to Earth next week." I'll be looking forward to more updates from the team!