Europe goes ahead with Aurora

This item is a little bit old -- I missed it when it was announced last Monday. ESA issued a press release stating that "European ministers approve the Aurora Exploration Programme and give green light for the ExoMars mission." It was just a release following a meeting of the 17 ESA member states. But it's significant because at this meeting 14 of those 17 members agreed, again, to participate in what is considered an "optional" program for ESA; and they backed up their agreement with promises of more funding than was originally requested. This is a good sign for the future of European exploration of Mars. Aurora is not a single mission, it is a space program whose objective is "first to formulate and then to implement a European long-term plan for the robotic and human exploration of solar system bodies holding promise for traces of life." The vision statement for Aurora outlines two decades of robotic missions to Mars designed to return the science and engineering data, and test the technologies, necessary to prepare the way for human spaceflight to Mars. Like any vision statement this is no doubt just a bit optimistic. Still, it's heartening how many of ESA's member states are subscribing with their checkbooks to this vision, and particularly to the first Mars mission to come out of it: the ExoMars rover. The announcement means that ExoMars is still on schedule for a 2011 launch. 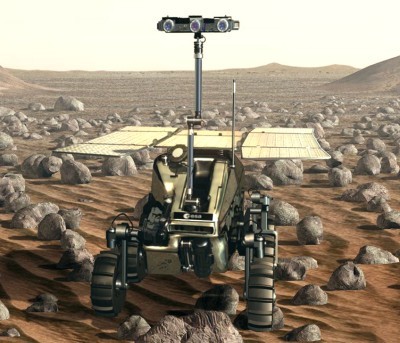