Cassini planner Dave Seal gave me a newly updated list of times and dates for Cassini's ongoing tour of the Saturn system, so I went through and compared my table to his and made updates to flyby distances. There weren't a lot of significant changes this time, except that this is the first tour table I've gotten from Dave that includes listed opportunities to observe Daphnis, the moon that was discovered in Cassini images to orbit within the Keeler gap. I don't include all of the flybys that are listed in Dave's table, because his table doesn't actually represent the list of encounters Cassini definitely plans to observe; it only includes all the encounters that are close enough for the Cassini planners to consider making observations for. I don't know of specific plans to actually take images of Daphnis in the future, but Dave pointed out to me one flyby very late in the mission at a relatively close distance of about 26,000 kilometers. Since Cassini will be in a high-inclination orbit at that time, and Daphnis is more than 15,000 kilometers closer to Saturn than Cassini can safely fly, that's about as close as it gets; I'm sure the planners will do what they can to make some observations of the moon at that point in time. In theory, if Cassini had its shutter snapping during the closest approach, it could get images with resolutions of roughly 150 to 200 meters per pixel -- which is pretty high resolution but would still give you only about 40 pixels across the 7-kilometer-diameter moon!

Dave also mentioned to me that in his free time he has finally gotten around to updating JPL's Solar System Simulator with new texture maps for Cassini's moons based upon the images. Here's a sample view of Iapetus, which Cassini is now observing pretty frequently, in a campaign that began on March 25 and will go through April 18 -- visit the Cassini raw images website if you want to see some images. 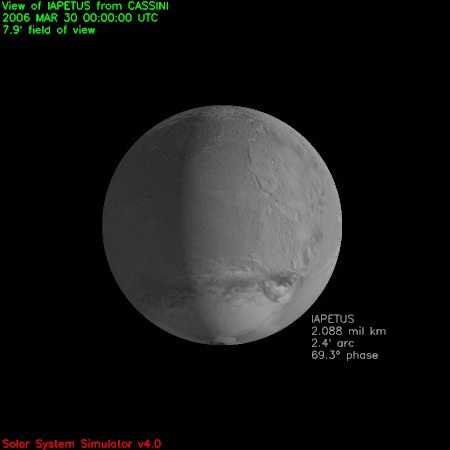