Although the two spacecraft traveled a billion kilometers together to study Titan, Cassini and Huygens are two very different types of missions. Cassini's data will be built up very slowly over the course of a four-year mission, and scientists frequently share provisional data products with the world, knowing that they will be supplanted with better or more complete data sets in the future. Such provisional results are very important for Cassini because the spacecraft's orbit can be tweaked on the basis of early results to make the most of the mission, the same way that the Mars Exploration Rover scientists guide the rovers to the best targets on Mars based on each day's new data.

By contrast, Huygens captured all of its data in three exciting hours; scientists have everything that they will ever get from the spacecraft. They are proceeding methodically in their preparation of that data, much like a paleontologist prepares a fossil specimen carefully, piecing the skeleton together before sharing the find with the world. We have seen all of Huygens' raw images, but few processed image products have been shared, until now. This week, the Huygens Descent Imager Spectral Radiometer Team released several new mosaics.

The first view shows the panorama visible to Huygens from an altitude of about 35 kilometers (22 miles), just below the cloud deck. 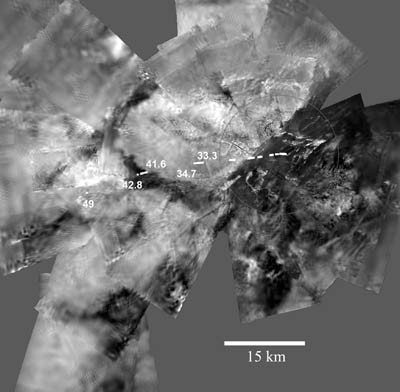 Huygens panorama from an altitude of about 35 kilometers (22 miles), just below the cloud deck

There was still a lot of haze at this altitude, and the view near the horizon is very fuzzy. But directly below the probe -- the area marked by the faint gray circle -- you can already see the sharp boundary between bright highland to the north and west and dark lowland to the south and east. The white dots on the image are Huygens' ground track, and the numbers Huygens' altitude in kilometers as it flew over each point on the ground. The next image zooms in on the area bounded by the gray circle. 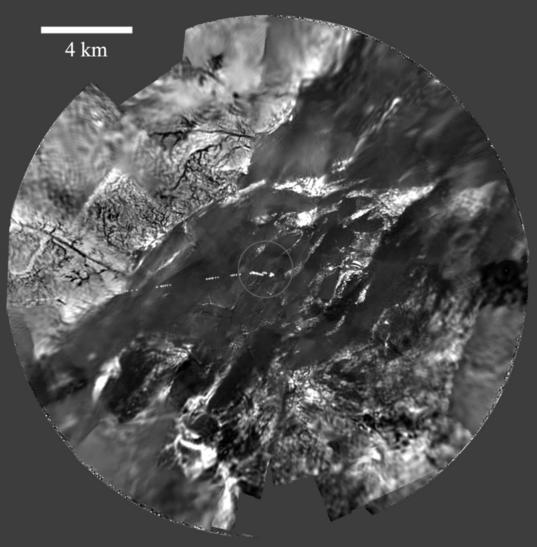 Huygens panorama from an altitude of 8 kilometers (5 miles)

Now we are lower, at an altitude of 8 kilometers (5 miles), and Huygens' view is much clearer. Huygens' ground track marches inexorably to the east, though the descent is now getting much steeper. To the left (east) we can see the "alien landing strip," the straight, broad channel with stubby tributaries. To the north we can see the drainage channels that so shocked the scientists when they were first spotted in Huygens' images on January 15. To the Pasadena, California-based management team of Cassini-Huygens, this set of channels debouching into the ocean-like dark lowlands were reminiscent of the Los Angeles River's terminus at Long Beach, California. Again, the gray circle at the center of this image marks the boundary of the next mosaic. 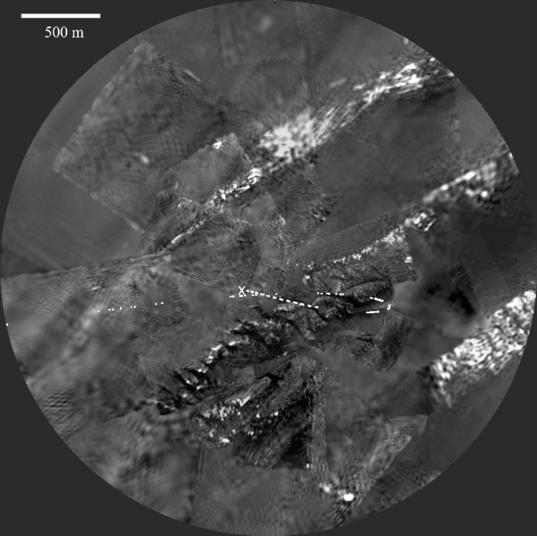 Huygens view of Titan's surface from an altitude of 1.2 kilometers (4000 feet)

This one represents the view from 1.2 kilometers (4000 feet). Now the images become fuzzy because the landscape is very dark, lacking contrast, and the available light quite dim. Still, Huygens made out what looks like a ridge dissected by channels. Probably the oddest thing in this image is the ground track. It continues from west to east, but suddenly, below an elevation of 9.3 kilometers (5.8 miles), Huygens' eastward motion stalled. The probe descended, took a hairpin turn, and traveled back in the direction that it had come from! 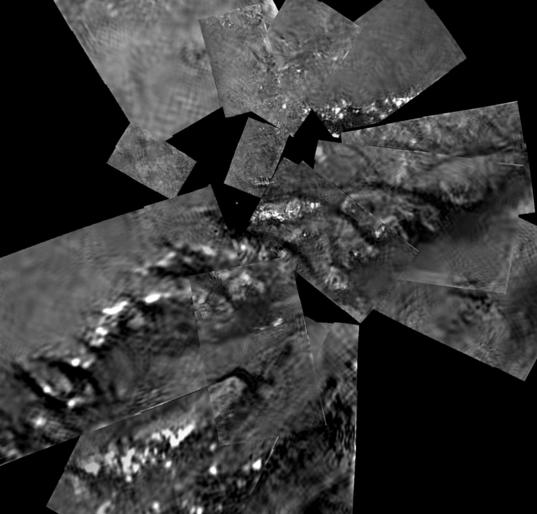 Finally, the image above shows the highest-resolution available images of the landing site. During the final part of the descent, Huygens stopped capturing images, and never got a high-resolution image of the point at which it touched down. That point is marked with the white cross at the center of this mosaic.

These mosaics are just the beginning of the new results that Huygens scientists will be sharing with the world in the coming weeks and months. The first scientific articles about the mission to Titan are now in the pipeline, undergoing peer review, on their way to publication. Stay tuned to planetary.org for much more from ESA's Titan probe!