Scientists have released a new sound from Huygens, representing the radio signal that Cassini detected from the little probe as it descended to Titan's surface.

The 1-minute-long file covers 4 hours of Huygens' lifetime, from the moment the parachute opened to a little over an hour after the unexpectedly soft landing. The frequency (pitch) of the sound file is related to the strengh of the signal as detected by Cassini -- when the sound is low-pitched in the first part of the file, Cassini detected a strong signal from Huygens, and when the sound is high-pitched at the end, the signal seemed relatively weak. The marked change in the pitch at about 43 seconds into the sound file represents the moment that Huygens landed, after which it was no longer moving (although Cassini was).

On top of the general decrease in signal strength over the course of the descent, there is a fast, repeating "chirping" sound, which is irregular at first, then gets more regular and slower over the course of the descent, and finally disappears after the landing. These shorter-period variations in the strength of Huygens' signal to Cassini result from Huygens' spinning and swaying under the parachute. The spin rate was fastest at the beginning of the descent (up to around 12 revolutions per minute), and slowest near the end (perhaps around 1 revolution per minute); of course the probe was no longer spinning at all after it landed. Also, Huygens swayed more at the beginning of the descent, which was unexpectedly bumpy. The spinning and swaying changed the orientation of Huygens' antenna with respect to Cassini, which in turn affected the strength of the signal that Cassini detected.

The sounds were produced by Ralph Lorenz, a planetary scientist at the University of Arizona, from data formatted by Miguel Perez of the European Space Technology Centre (ESTEC). Lorenz explained that the variations present in the sound file contain very interesting information about the dynamics of Huygens' descent, but that interpreting them will take some time, because "measurements of any sort on a spinning platform aren't something that any of us are really familiar with." 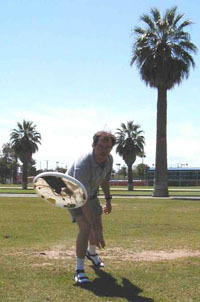 To improve researchers' familiarity with measurements on spinning probes, Lorenz has actually performed research in which he investigated such measurements by attaching tiny sensors to a Frisbee. "This was a quick and easy way of seeing how light sensors and accelerometers and acoustic intstruments are affected by the flight dynamics of a spinning platform. I felt a little bit guilty about doing some of this stuff, but it did seem that it was worth getting familiar with spin-modulated data sets. Ultimately, the goal is to understand how much of the probe dynamics are intrinsic to the probe itself, and how much it's from the Titan environment exciting the dynamics. Because it's the Titan environment that's really interesting, both to interpret [Huygens] data and for future missions."