It's been close to a month since Huygens descended to the surface of Titan. Many visitors to this website have expressed impatience with the pace of the release of images from the Huygens cameras, a feeling that is no doubt shared by space enthusiasts around the world who are eager to see refined views of the alien surface of Titan. New images released this week show hints of the topography of Titan's landforms in 3-D. They also provide visual explanations of why it's so hard to deal with the Huygens images, and why it's impossible for the Huygens imaging team to match the standards set by the Mars Exploration Rovers.

Five sets of stereo image pairs were posted on the website hosted by the Descent Imager / Spectral Radiometer (DISR) Team, based at the University of Arizona. Here's one example: 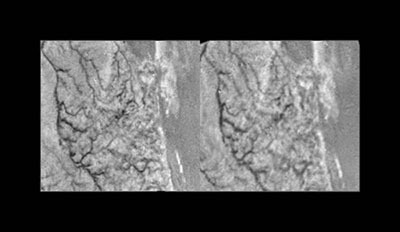 Geologists who do a lot of mapping quickly learn to see stereo pairs of images as 3-D by crossing their eyes. Here's how: Bring your face to within about 30 centimeters of the screen. Relax. Then go as cross-eyed as you can. You will see the two images move until you have made them look like four. Gradually let your eyes uncross, and two of the four images will start to overlap. Try to make a feature that you can recognize in the center of both images line up. Tilt your head slightly left or right until they are perfectly aligned and then allow your eyes to adjust and relax in the new position. You may need to bring your face closer to the screen. If you are lucky, the two overlapping images will snap together into one 3-D image. Once you see it in 3-D, you can usually let your eyes roam around the image just a little bit without losing the 3-D focus. When you are done, close your eyes, move your head away from the screen, and open your eyes again to help you refocus properly. (We do not recommend that you spend more than a few seconds with your eyes crossed on the image.) Not everybody is able to fool their brains into thinking that they are looking at a 3D picture in this way.

Another way to make the images appear in 3-D is to create a "stereo anaglyph." The image below represents the same area as above, but it is viewable in 3-D using a pair of 3-D glasses (glasses with red cellophane over the left eye and blue cellophane over the right eye. 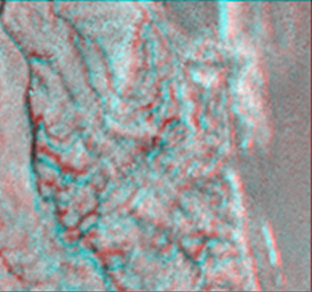 To see all five sets of images, click here.

Why Is It Taking So Long?

A Planetary Society Web visitor probably spoke for many other visitors when he wrote: "I don't want to sound like I'm complaining, but a few friends and I are beginning to feel like there is something about the Huygens probe data that's being "covered up". We wonder why so few images are being let out and why their resolution quality seems poor compared to images from the Mars rovers or the Mars Global Surveyor....What is that they have to do to this data that takes so long?? Why is it so much work for them?"

There is no cover-up; it is just hard to process the Huygens images. Here's why.

Question: Why is the resolution of the DISR images so low?

Answer 1: Because the DISR instrument consists of three cameras that split a 256 by 512 pixel space on their CCD.

Answer 2: Because the resolution didn't need to be any higher to accomplish the stated imaging goals.

Answer 3: Because Huygens, which was only expected to live about 150 minutes, had no onboard data storage, and had to transmit all of the data from all of the instruments over radio links with a total bandwidth of 9600 bits per second. DISR was allotted fully half of the bandwidth, 4800 bits per second.

Armchair space explorers who are accustomed to the gloriously detailed images from Cassini, the Mars Exploration Rovers, and especially Mars orbiting spacecraft like Mars Global Surveyor and Mars Odyssey were rudely surprised by the size of the images that are being released by the DISR team.

Question: Why is the quality of the DISR images so low?

Answer 1: The images were compressed to only 12.5% of their original file size before being transmitted from Huygens to Cassini by a "lossy" compression scheme in order to increase the number of images that could be sent through the 4800 bit-per-second radio link.

Answer 2: Because of the dim light and dominant haze at Titan, the inherent contrast in the images is very low--that is, "dark" areas are only a few percent darker than "light" areas.

Answer 3: Over the long period of Cassini-Huygens' trip to the Saturn system, the electronics aged, introducing blemishes into the camera system, blemishes that the instrument team couldn't see (and therefore figure out how to correct for) until the images came back from Titan.

Question: Why is it taking so long to process the images?

Answer 1: Give them a break, this mission has been decades in the making and it's only been four weeks!

Answer 2: Because of the way that DISR was built for the demanding environment at Titan, performing "flat field" corrections is much harder for DISR than for most spacecraft.

Answer 3: Titan's atmosphere proved to be much more turbulent than Huygens mission planners expected, and the DISR team's sun sensor failed to lock on the Sun, which means that DISR team members didn't know right away which direction Huygens was pointing when the images were captured.

Question: Can the images that were lost on Channel A be reconstructed from the data that was received on the ground?