It's been a while since I posted some Cassini pictures here just because they were pretty. I was struck by this lovely new image of Pandora and the outermost rings: 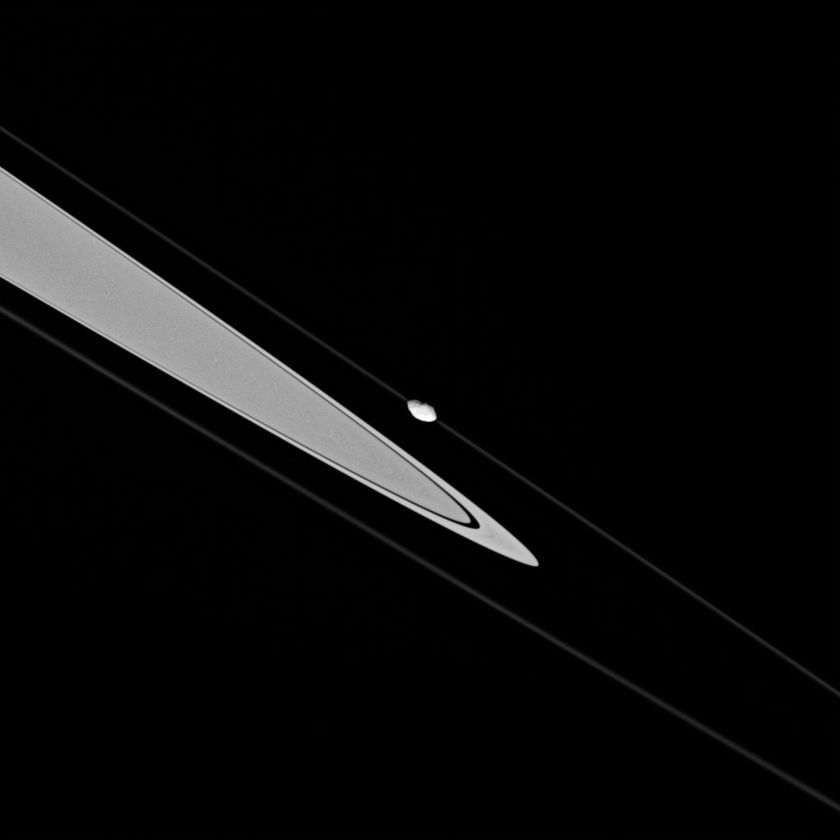 Pandora, a pearl on the F ring

Cassini's point of view on Pandora and the outermost edge of Saturn's rings makes the outer F ring shepherd moon look like a pearl on a string. In fact, Cassini is looking at the rings from less than a degree below the ring plane; Pandora is closer to Cassini than the faint thread of the F ring. Cassini was only 455,000 kilometers (283,000 miles) from Pandora when the image was taken, so the lumpy shape of the tiny moon is resolved in this image. Also visible is the outermost edge of the A ring, including the very thin Keeler gap.

Also, I have been monitoring the Cassini raw images website and came across the component images necessary to produce this (very approximately) true color picture of Tethys sitting in front of the globe of Saturn: 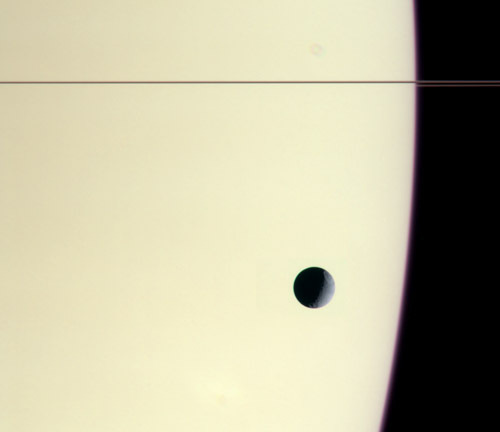 This image was made by combining three photos captured through red, green, and blue filters on 3 December 2005. A crescent Tethys sits in front of the globe of Saturn, and the rings are seen almost perfectly edge-on.

When the Cassini team plans observations done with any of the instruments, there's usually a lettered code assigned to the observation that gives a brief description of the purpose of the observation. For instance, on a flyby of an icy satellite, the plan will include codes like "REGMAP," which is short for "regional map," or "ICYLON," which is a code for images that are captured to acquire some coverage of an icy satellite at all longitudes (even though the pictures may be pretty low resolution, they need to take as many as they can from different viewpoints to explore how the colors of the bodies change with longitude and sun angle), or "MUTUALEVE" which is short for "mutual event," which describes a set of images captured of two moons passing by each other through Cassini's field of view. But my favorite one of those codes has to be "KODAKMMT," which is clearly short for "Kodak Moment" -- in other words, the purpose of the observation is to take a photo for no other particular reason than it is going to be pretty. Cassini has a lot of science goals to accomplish at Saturn but I am very happy that they are taking just a few data bits to occasionally snap pictures, like the Tethys and Saturn one above, that are just plain pretty!