I am working my way steadily through the seven Huygens papers that were released by Nature magazine Wednesday on their "Advance online publication" website. Nature uses this site to release a selected group of papers to the public before their appearance in print, and it was this release that prompted the spate of press releases and news stories on Huygens on Wednesday. Unfortunately, I still don't have a story written for our website, because there is just so much information contained in these articles! As a first step, though, I added all of the new publicly released images and graphs to my "Data from the Huygens Landing Site" page. Here are a couple of the newest results.

First, it looks like the Huygens DISR and Cassini RADAR teams have pretty much nailed down the location of the landing site. Here is a new image made of a DISR mosaic overlaid on top of a RADAR image. You can see that in a couple of the very highest altitude DISR images -- the ones at the outside edge of the mosaic -- there are two parallel dark features that line up right on top of two "cat scratches" visible in the RADAR image. 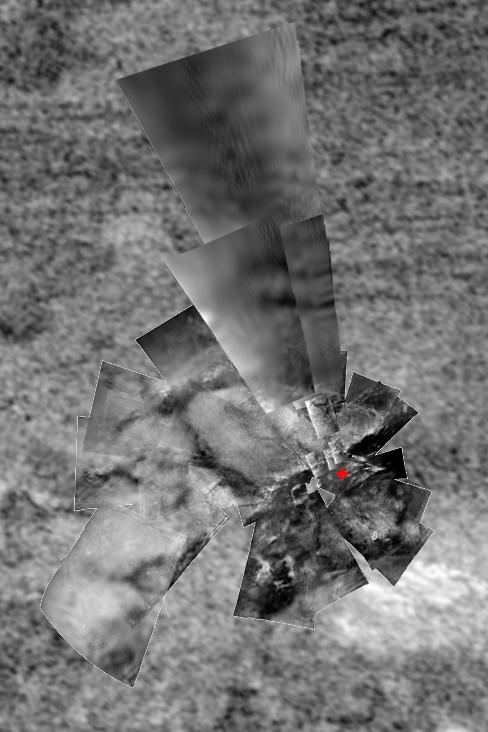 Matching the DISR panorama to the RADAR images

Mosaic of Huygens DISR images overlaid on a Cassini orbiter RADAR image taken on October 28, 2005. The landing site, marked by a red "X", is located at 192.3 degrees west, 10.3 degrees south. Note that two "cat scratches" were visible in several of the highest-altitude DISR images. Source

Second, here is a cool graph from the Huygens DISR team showing wind speed and direction inferred from their images during Huygens' descent. You can see that for most of the descent it's really a very good assumption that Huygens' winds blow from west to east as expected. But something funny happens below 10 kilometers altitude, where the wind speed drops to zero and the wind direction turns all the way around.

DISR found the wind speed to decrease steadily throughout most of its descent. At an altitude of 7 kilometers, wind speed dropped to near zero. At this altitude, the winds also reversed direction and blew westward.

I'll also finish for the weekend with a few tidbits of thought-provoking material from the Nature papers:

From the DISR team paper: "It is interesting to compare the brightness and colour of the scene [after landing] with that of a similar scene on Earth....the illumination level is about that experienced about 10 minutes after sunset on the Earth. The colour of the sky and the scene on Titan is rather orange due to the much greater attenuation of blue light by Titan's haze relative to red light. If the Sun is high in the sky, it is visible as a small, bright spot, ten times smaller than the solar disk seen from Earth, comparable in size and brightness to a car headlight seen from about 150 meters away."

From the HASI team paper: "We might have seen evidence for lightning." And "no significant signature of rain could be found."

From the GCMS team paper: "The 40Ar signature from the GCMS data may thus reflect a complex multi-step process that brought first the parent element [potassium], then the argon itself, upward through liquid and solid water layers to the surface. But just the presence of the 40Ar at the levels seen [by GCMS] is a strong indication of the geological activity of Titan."

Finally, for the historians, a precise timeline of the events during Huygens' landing was published in an overview article. Here it is: