Getting ready for Hayabusa's touchdown

In a further update on Hayabusa's status, we have been contacted by Kazuya Yoshida of the Space Robotics Laboratory at Tohuku University. They appear to be involved in modeling the conditions on the surface of Itokawa in order that they can predict how Hayabusa will behave in the sampling activity planned for this weekend. Yoshida reports that the touchdown is now planned to take place "in early morning of November 20 (Sunday) JST", which would make it late Saturday evening UTC, or Saturday midday here in California. He has also sent us several links to Web pages that the Space Robotics Laboratory developed containing computer animations of the attempted touchdown. Here are a couple of stills from the videos: 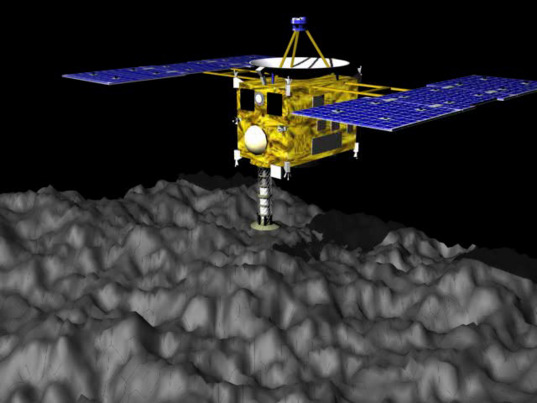 The third page at Yoshida's site contains some interesting video of how Hayabusa will cope with Itokawa's unexpectedly rough shape. The asteroid is 540 meters by 270 meters by 210 meters in size, and it's covered in boulders that are many meters, even up to 10 meters across; landing could be difficult. In particular, the site says:

Another dangerous situation is represented by the possibility that some part of Hayabusa other than the horn comes in contact with the surface during the descending maneuver. This can happen if there is a significant difference in height between the surface in the contact area and the surface around it. In particular, it can be critical if a part of the left and right solar paddles, each one measuring approximately 4.2 x 1.4 meters, is damaged, since it will be used to generate the electric power needed by the ion engine used to take Hayabusa back to the earth.

To avoid this problem, Hayabusa is equipped with a Fan Beam Sensor (FBS). The sensor has the scope to scan the area under the two solar paddles to detect any obstacle. If an obstacle is detected, the four thrusters under the probe main body are fired, and the descending operation is aborted.

We will all be watching and waiting this weekend to see if Hayabusa lands successfully. Just one sample from an asteroid could tell us so much...