A couple of pretty Cassini photos from this week

First, here's a nice shot of Epimetheus, which was taken about a month ago: 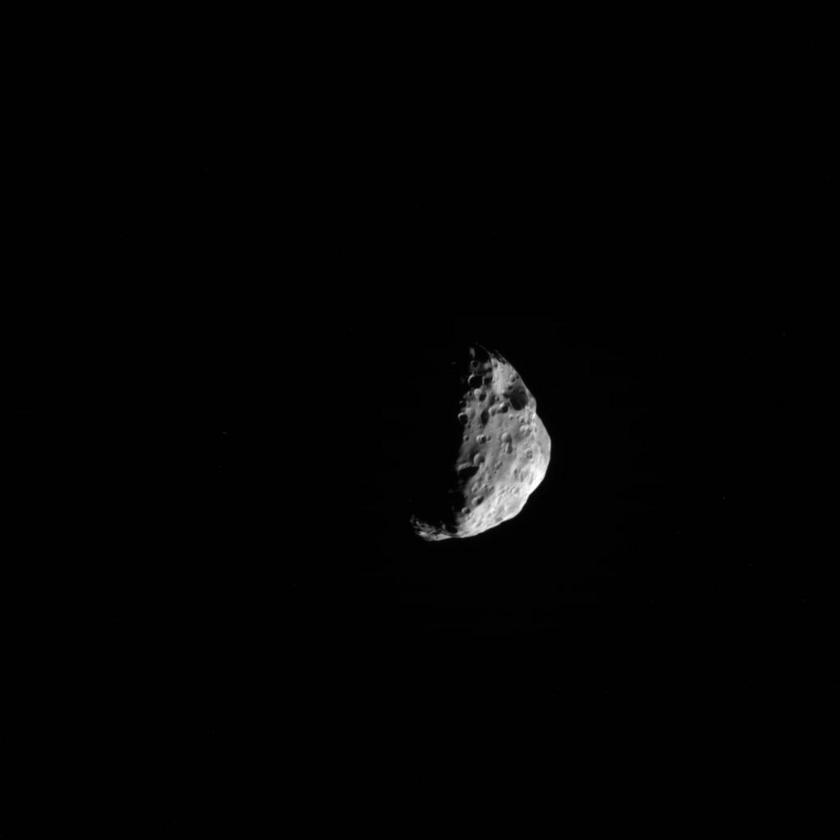 Detailed views of Epimetheus are rare because it is such a small moon, only 98 to 144 kilometers in diameter. A little math tells you how close you have to get to a 100 kilometer body in order for it to appear 200 pixels across. That's a resolution of half a kilometer per pixel. The resolution of the Cassini Narrow-Angle Camera is 0.000006 radians per pixel. For really small angles like that one, the distance from the target, times the angular resolution, gives you the camera resolution on the target. So Cassini has to get within 0.5 km / 0.000006 = 83,000 kilometers in order to get such a view of Epimetheus. Usually Cassini's view of it is more like this one, where Epimetheus appears as a mote floating just outside the rings

That image was taken at a distance of about 2 million kilometers. Multiply that distance by the angular resolution of 0.000006 and you get a resolution of 12 kilometers per pixel at Epimetheus, so about 8 or 12 pixels cover the whole moon. It's tiny!

And speaking of the rings, here is a great shot of Saturn's D ring, which is really a set of many dim, fuzzy rings that seem to orbit almost all the way down to Saturn's cloud tops:

The D ring is the closest ring to Saturn. It's made mostly of microscopic dust particles, so it's most visible only when the Sun is almost directly in front of Cassini, and the dust particles "forward scatter" sunlight to Cassini's optics -- much the way you can see dust in the air in your house when it's in a sunbeam. It's not usually visible in Cassini images where you can see the whole ring system, like the one below. In the image below, the main broad band is the B ring, and the thin stripy band below it is the C ring. The D ring would be below that in this image, but you can't see it.