Mars Global Surveyor has been in orbit for nearly eight years. Three more orbiters have arrived since then and there's still nothing at Mars short of a lander that can capture more detailed pictures than MGS can. Mars Reconnaissance Orbiter will change that, but MGS has had a fantastic run, and the pictures it's sending back are still absolutely fascinating. Here's one that was released this week: 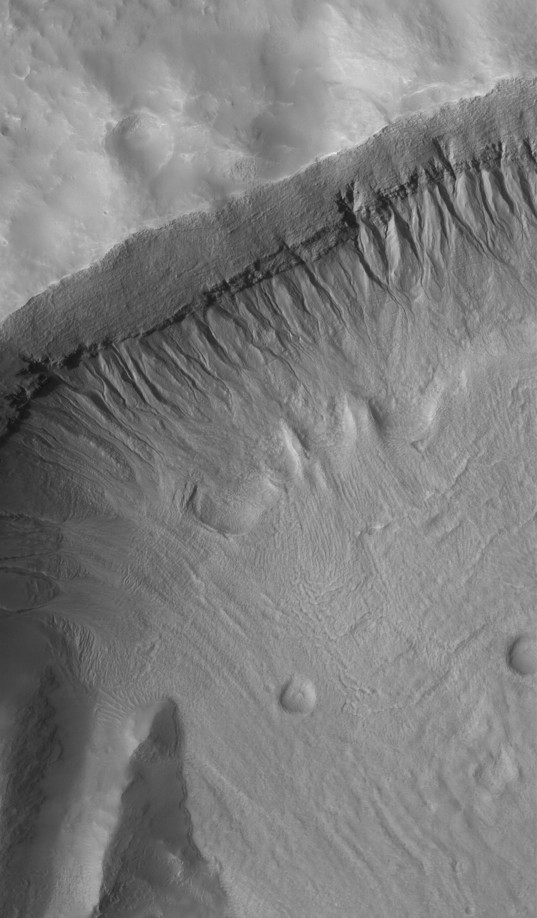 It's hard to show MGS and Mars Express images on the Web because the reason they are so great is the fantastic resolution they afford. Computer screens can't do justice to the detail unless you zoom and zoom. If you zoom in on this one, and have the patience to wait for it to download, you'll be rewarded with a lovely view of a place on Mars that seems to be just like places on Earth until you really, really look at it hard.

There's a resistant layer in the wall of this crater in the Terra Sirenum region of Mars. Above that layer is a thick pile of something, some material that seems to have some faint layering but the layers aren't real coherent; that stuff makes a flat or rolling plain, into which this crater has been cut. Below the resistant layer are some beautiful little anastomosing gullies, some of them with tributaries.

On casual inspection it looks like a steep-walled canyon on the Earth. But on a canyon on the Earth, those gullies would start on the edge of the canyon wall, right up where the flat plains are. As they grew, they'd eat back into the flat plains, making pointy divots in the edge of the canyon wall. But the upper edge of this canyon wall is very straight and smooth. In fact, the gullies only start to appear in the crater wall below the resistant layer. What's going on here is that those gullies didn't form from rainfall. They formed when groundwater percolating along a resistant layer found itself released in the middle of a crater wall. The groundwater rolled downhill, making classical-looking little rivulets, and even eating back into the crater wall so that the material above it collapsed, making the alcoves you can see in some places just above the resistant layer. But nowhere do you see a gully that originates on the actual edge of the crater wall.

There's been liquid water in this spot on Mars, but only in the ground, not the sky. This happens on Earth, but it's rare. But it may have been the commonest source of liquid water on Mars. Mars is very misleading that way. At first glance it can look familiar, almost mundane to a field geologist, but it's different in ways you don't expect, and an Earth geologist's instincts can easily lead one astray.

The image is from NASA, JPL, and MSSS; here's its original caption.