I've just posted a very brief update on the upcoming Titan flyby, which will be the first to include RADAR imaging across the Huygens landing site. Judging from the map they published, the Huygens landing site will be right at the tip of their RADAR swath. In previous swaths, the quality of the images at the swath ends has been kind of noisy. So while I'm hopeful that the RADAR images will provide the detail we've been waiting for to pin down exactly where Huygens landed, it seems to me that it's not absolutely guaranteed. I can't wait to see the pictures. I expect they will not come out until Monday at least.

They finally published a map showing the locations of the RADAR swaths (something I've been asking people on the team to do for a long time!), which is really helpful for visualizing where on Titan their long skinny images are placed. I took their published map and I dropped it into the map format that the imaging team uses to publish their flyby previews. So now you can compare the imaging coverage to the RADAR coverage more directly. Here's the two maps: 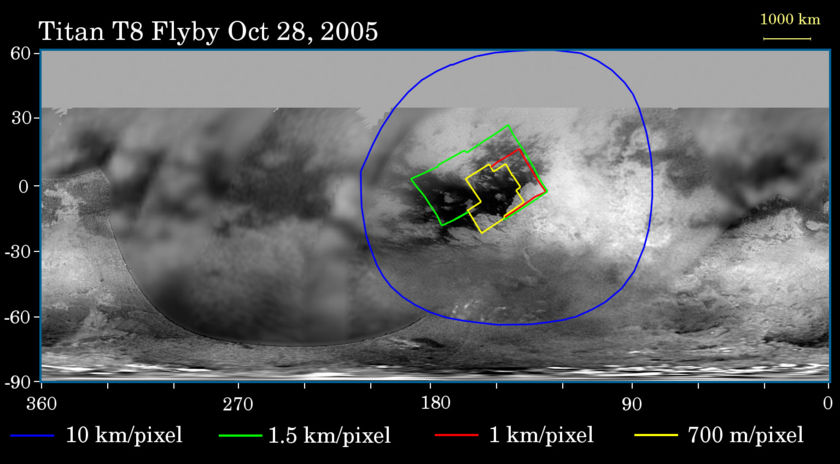 Cassini returns to imaging the areas it visited during the Titan-A, Titan-B, and Titan-3 flybys in the Titan-8 encounter on October 28, 2005. Highest resolution views are centered on the dark Shangri-la region to the west of bright Xanadu. 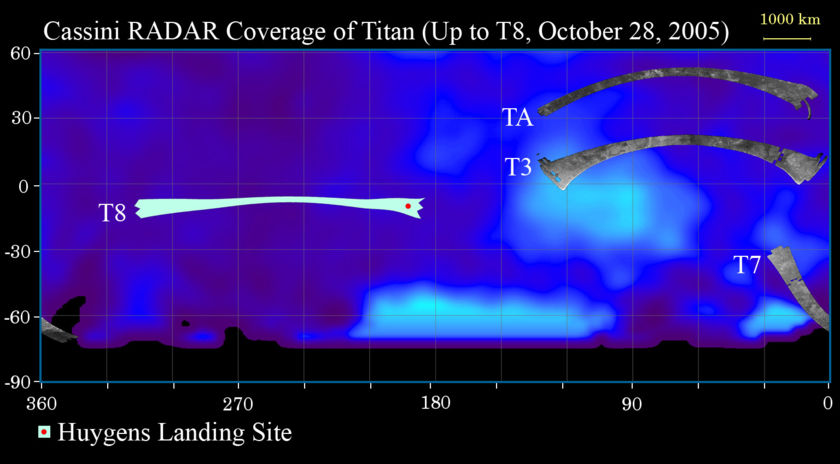 Map showing the accumulated RADAR images captured by Cassini as of October 2005. The RADAR swaths are displayed on a Hubble Space Telescope base map for better visibility.

I'll have more such maps, in similar format, on our new website when it goes live on November 1st (only 5 days left, eek!)