I was on the way out the door to a party last night when I checked my newsreader and was astonished to discover a report on the AP newswire that 2003 UB313, the "10th planet," has a moon! Here's the discovery image: 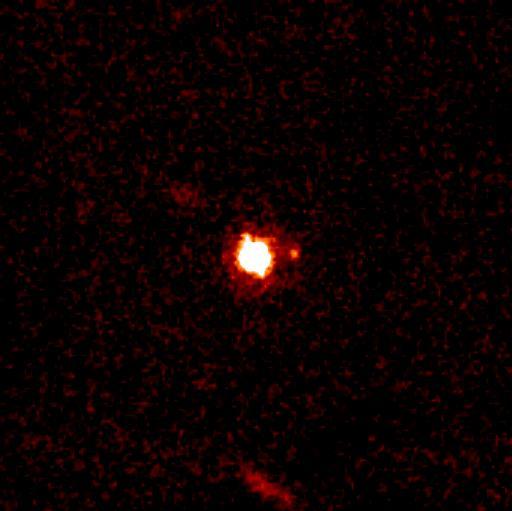 The fact that 2003 UB313 has a moon is extremely convenient for scientists, because it will allow a reasonably accurate determination of the object's mass. Mass can tell you a lot about what the inside of a planet is made of -- in this case, ice or rock -- and allows another way of comparing this body with Pluto and 2003 EL61 and other Kuiper belt bodies, to see whether they are all the same and all different. You can learn more about the moon at Mike Brown's website.

It seems that 2003 UB313 is destined to have mucked-up publicity, though. Its discovery was announced in a hastily assembled press conference on a Friday evening. This new moon was announced late on a Saturday night. I got a press release about it this morning that said "embargo lifted" on it. I can only assume that somebody out there jumped the gun, speaking publicly about it before the press embargo had been lifted, and they had to rush to distribute the information.